Let's be honest: Jamey Wright is having a career year, and if nothing else, this should at least be exciting.

Call what horrible names you will, but I like Jamey Wright. He's a workhorse. He pitched in an universe where a 4.87 ERA was good enough for an 88 ERA- (1999 with the Colorado Rockies), and he has been NRI'ing his way into bullpens for about a decade now. He's a GB machine (~56%) and in 2013, he's been actually a bit of strikeout pitcher: 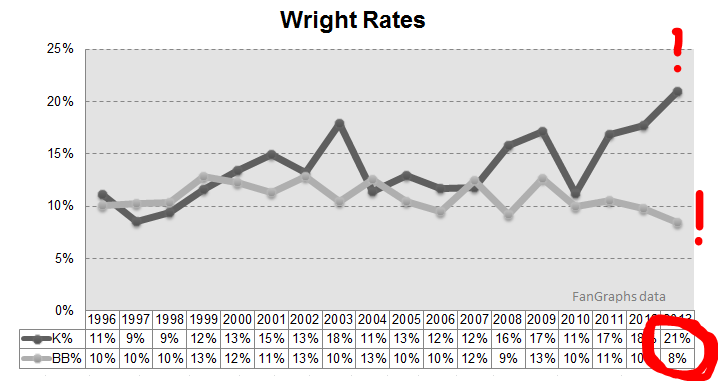 At this point, both ZiPS and Steamer project around a 3.70 FIP or lower for Wright through the remainder of the season. Granted, as a starter, that number should go up, but what these systems don't know is the he's pitching for the Rays now, and the Rays are the Changeup Mafia. 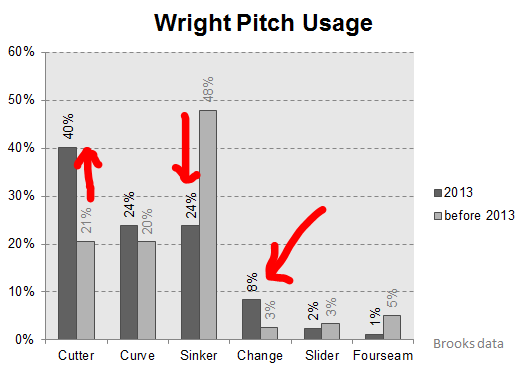 Basically, Wright has more than tripled his changeup use and has obliterated his previous approach, going cutter crazy and sinker tepid. His 8.3% swinging strike rate is the 2nd highest he's had in the last 11 seasons and his 21.0% K-rate and 8.4% BB-rate are both career bests.

At this point, he has a 3.05 FIP and a 3.40 SIERA, both are superior to Roberto Hernandez (who, it's very important to note, has been starting, not relieving like Wright).

All this to say: The last Jamey Wright start was August 25, 2007. President Bush was still in office; Senator Obama was still unheard of on the national scene; Brittany Spears was six days away from releasing her comeback single, "Gimme More," which accompanied a pole-dancing music video to which I responded then and likewise respond now: "I don't want to see that; I wish I could forget what I saw."

Good luck, Jamey. I believe in you!