Last night I was struggling to find something new and interesting to say about Clay Buchholz. Rays fans know him well, and aside from looking like a dinosaur, he's just not all that exceptional. He's neither great (aside from 84 innings this season) nor that bad—instead he just plods along as a pretty well above average pitcher.

His pitches, similarly, do not jump off the page, other than perhaps his high-80s cutter. His fastball is low to mid 90s, his extra straight changeup averages 80 mph, and his sweeping curve is just slightly slower at 78 mph. Yes, he's started throwing a harder offspeed pitch, classified as a splitter by Brooks Baseball, that get's good results, but if he's only thrown it 2% of the time, is it really worth studying? I knew that Buchholz is good, but I couldn't say why.

Then I had a realization. I was right to suppose his cutter as a money pitch. At 88 mph, it's hard, but it has as much horizontal movement as a serviceable slider might (but with the trademark fastball rise). Buchholz throws it more often than any other secondary pitch, both to righties and to lefties, but doesn't get very impressive whiff totals. That's the line of thinking that lead me astray: I was evaluating Buchholz's cutter as I would a secondary pitch, but Buccholz's cutter works like a fastball.

Think about his opponent in tonight's game, David Price, for a comparison. Price locates his cutter on the outside of the plate to opposite-handed batters. That means it starts outside and cuts back over the plate. The two most common desirable outcomes is for the batter to take it for a strike, or as happens less often, swing and miss at outside balls. If he does that enough, he'll start to lean out over the plate so he can make contact with outside balls. It's a pitch that relies on tricking the batter, playing with his perspective, and against righties, it's an out pitch.

Not so Buchholz's cutter. He throws it all throughout the at bat, and to hitters of both handedness. It's not a secondary pitch, the way Price's is—it's a fastball. Look how he uses it: 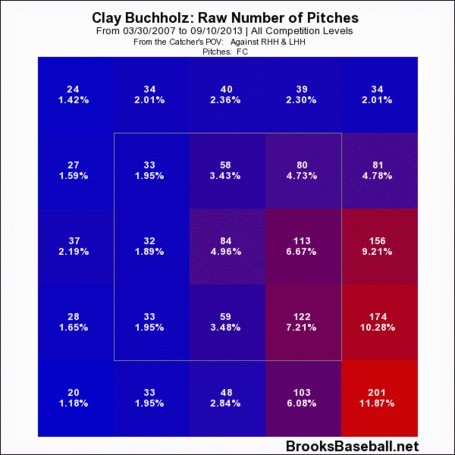 That's against hitters of both handedness, so what it really means is down and away (and moving away) to righties and down and in (moving in) to lefties. Now if the pitch were a slider, that would be normal usage, racking up whiffs. But it's not. Hitters don't whiff all that much against Buchholz's cutter. They swing at it more often than at any of his other pitches (SSS splitter excluded), despite the fact that it's off the plate as often as it's over it, and they foul it off more often than any of his other pitches. They put it in play at a rate similar to his other fastballs. When they do put it in play, they post the lowest BABIP of any of Buchholz's pitches, at .260 over his career.

So what again does the impressively cutting cutter do for Clay Buchholz? It's a pitch he can throw to anyone in any count, without getting hit hard. That allows him to show his other pitches less often, and turns what otherwise appears to be an average pitch mix into a good one. His traditional fastball may not blow hitters away, but when there are three distinct and usable options (four-seam, sinker, cutter) for the same job, everything can play up a bit. Really, this is what most fans envision when they think of a cutter, I think. It's how Roy Halladay, Cliff Lee, and a host of other good pitchers operate. But other than the recently departed Kyle Farnsworth, there hasn't been a single Ray in recent times who's been successful with this approach to cutter use.