Joel Peralta allows a three run homer in the eighth inning, torpedoing the Rays chances at a win.

This one hurt. With Texas down 3-1 at the time of this publication, the Rays had a chance to take sole position of the first wild card spot with a win. Instead, they blew a 3-0 lead over the final two innings, ultimately losing 6-4.

David Price loaded the bases with one out in the seventh inning, giving way to Jake McGee. McGee, who has had trouble with inherited runners all season, allowed a two run single closing the gap to 3-2. He'd strikeout the next two batters to escape the frame. The Rays tacked on a run in the top of the eighth, and Joel Peralta replaced McGee in the bottom. After getting Darin Mastroianni to fly out and Brian Dozier swinging, Peralta gave up a deep homer to right-center to Ryan Doumit, bringing the Twins back within one. Trevor Plouffe singled and Josh Willingham walked, bringing catcher Josmil Pinto to the plate, he of 10 games Major League experience. Two pitches later, the Twins were winning 6-4 and the Rays three game win streak had come to an end. 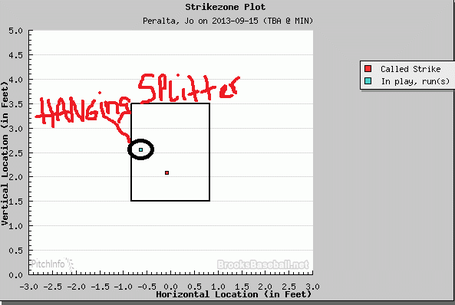 It's a loss that hurts more than any of the blown saves earlier in the season. They all count the same but the later in the season it is, the more gut-wrenching they are. David Price pitched well until the seventh, scattering five hits through the first six. His velocity was just fine after his 127-pitch performance, averaging 94mph. The offense again lacked the clutch hit that could have blown the game wide open. With one out and men on second and third in the fifth inning Evan Longoria grounded out sharply to third. Wil Myers was intentionally walked, but Delmon Young flew out to right. In the seventh inning they loaded the bases with one out but failed to get any runs once again, dropping to zero for their last fifteen with the bases loaded. A hit there makes it a 6-2 game at minimum and things are totally different in the bottom of the inning.

To make their fortunes worse the Indians and White Sox game was delayed, meaning the Tribe misses facing Chris Sale. The Rangers come to town tomorrow to open the biggest series of the year as the two teams will be tied atop the Wild Card standings.