The Rays are currently tied for the AL Wild Card as the season winds down.

The Rays have exactly fourteen games remaining in the 2013 regular season. Today they will open a four game series at home against the Texas Rangers. Both the Rangers and the Rays are tied atop the AL Wild Card standings. Here’s what the current standings look like, courtesy of MLB.com. 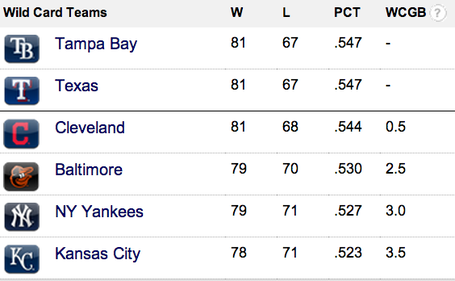 Needless to say, yesterday’s loss to the Twins was absolutely crushing. From the missed opportunities to add on more runs with bases loaded not once, but twice, to the questionable Lobaton pinch hit, and then with leaving a gassed reliever on the mound despite allowing a homerun, single and a walk, only to blow the game. Yesterday’s loss truly is one that the Rays need to sweep under the rug and not let it affect their momentum.

The Rangers were just swept by the A's in Texas, after being swept by the Pirates in Pittsburgh earlier in the week. Texas has truly lost their momentum, and Tampa Bay needs to capitalize on this opportunity to regain sole possession of the Wild Card.

The Indians are headed to Kansas City for a three-game series against the Royals, Baltimore is off to Boston for a three-game series against the Red Sox before they travel to the Trop this weekend, and the Yankees are headed to Toronto for three games. In three days, the Wild Card standings could have a very different look than what they currently are now.

Tonight we’ll see Alex Cobb take the mound against Matt Garza. The rest of the series matchups are Hellickson-Tepesch, Archer-Holland and Moore-Darvish.

-The Rays aren’t really that compelling of a team, according to David Schoenfield of ESPN’s "The Sweet Spot" article ranking the playoff contenders.

-Here’s a look at the Red Sox final goodbye to Mariano Rivera.

-Dave Cameron of FanGraphs takes a look at what compensation picks are really worth and mentions the Ryne Stanek pick by the Rays.

-Roger Mooney of the Tampa Tribune explains why Garza could be a tough opponent in tonight’s matchup, and also mentions that Tim Beckham could be called up by the end of the week.

-The Hardball Times examined home field advantage in regards to umpire strikezones, illustrating this quote from Phil Birnbaum: "If the umpire is going to show favoritism to the home team, he or she will do it when it is most valuable -- when the outcome of the game is affected the most."

@Buster_ESPN And our starting pitcher tonight, Alex Cobb, has a lower ERA than all three! (So do Archer & Moore, for that matter.)