Is this the end of Joel Peralta?

Share All sharing options for: Is this the end of Joel Peralta?

Joel Peralta has pitched for the Rays since 2011, and been a decent high leverage option out of the bullpen. Armed with a slider/splitter arsenal and the largest biceps you've ever seen, Peralta has been one of the most consistent and terrifying aspects of the Rays relief core.

Now we're questioning everything. Last night the Rays had the opportunity to claim the top position in the Wild Card standings, and Joel Peralta was unable to lock down his traditional eighth inning. Joe Maddon left Joel to his devices, as is his style, and that should come as no surprise. Speaking to the press after the game, Maddon reiterated his strategy with relievers:

"Joel's been our guy all year, and that's a situation I wanted him to get through," Maddon said. "This is who we are, and for us to go deep into the playoffs it pretty much has to work this way. You only try to reinvent right now if you have an injury, otherwise you've got to stay with the tested guys. I have all the faith in the world he's going to be fine."

As frustrating as it might be, this has been and continues to be Maddon's game. He rests his 'pen by letting relievers work through their own mistakes. He charges his pitchers to take responsibility; even if it feels like the pitcher faces one more batter than he ought to.

Maddon had Torres ready, and probably should have pulled Peralta on a weak outing, but the unexpected happened. After a strike out to lead the eighth, Peralta had given up a homer, a single, and a walk. A double play ball would end the inning, but Peralta is a flyball pitcher, and he hung his splitter in the zone by about a foot.

When did Peralta become so hittable? To be honest, he hasn't, and the homerun was somewhat a surprise.

Joel Peralta has never been a groundball pitcher, in spite of his two-seam action, and this season's figures do not tell the story of a guy losing his touch. In regards to the dramatic, Peralta even has now allowed only 7 home runs this year, compared to nine and seven going back the last two seasons.

Peralta's velocity has lost some edge as the season has dragged on, averaging only 89.5 on the four-seam, but that's neither odd nor the reason for his faltering.

Perhaps we could leverage some blame on the splitter. Peralta has a perchance to throw some splitters without much movement, but in the past those mistakes would normally boast exaggerated movement in a separate direction.

Using the movement maps at Texas Leaguers, I've marked the normal distribution of Peralta's Splitter over the last two seasons, and drawn a line to separate splitters thrown with his traditional movement, and those without. 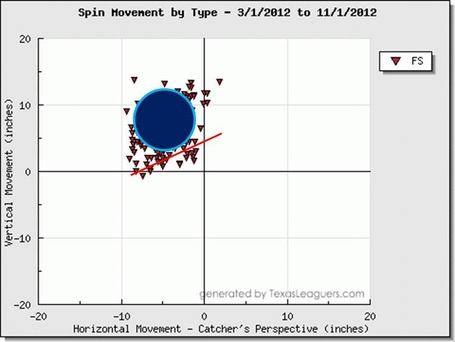 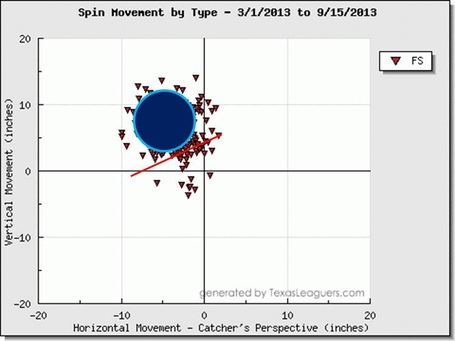 Perhaps this is where Joey misses the pine tar. A lot of splitters are floating into the middle of the chart and looking very readable. Regardless of placement, the easier they are to read, the more likely Peralta is to lose that match up.

From a cursory level, it's clear that by walks have become a problem.

The results of pitches have been similar, but Peralta has allowed too many free rides.

Nearly doubling his walk rate from last season has degraded his high-leverage guarantee, lifting his FIP- from 80 (or twenty percent better than average) to 99 (very average). By WAR standards, with a similar level of output to the last two seasons, Peralta has less than half the total we're used to.

Leading into last night's loss Peralta had allowed only six runs since the start of August. Over those 17.2 innings, Joey had 14 hits, 9 walks, 20 strikeouts, 1 HR, and a .212 BAA. He had allowed only five home runs this season going into the night, and that is probably why Peralta took the loss so hard.

In the clubhouse after the game, Peralta was on the verge of tears talking with reporters.

In the game, we saw Peralta slip into the same issue with his splitter, losing movement. 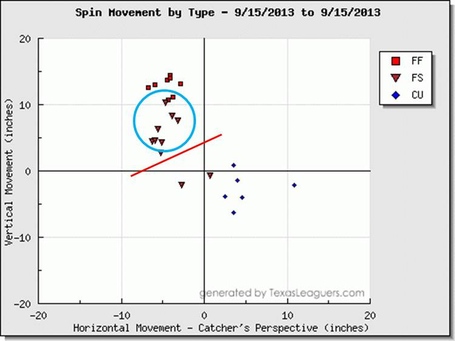 Of his eight splitters thrown last night, one in particular lacks any movement whatsoever, and the other poorly thrown splitter was put into the bleachers by Ryan Doumit. Peralta's performance lives and dies by the splitter, and right now I wouldn't call this living.

Trouble with the Curve

Fixing the splitter won't get Peralta out of the woods just yet. He's lost touch with his curveball, and his third offering is not exuding confidence right now.

Of the three pitches put into play last night, two were curveballs in the middle of the zone. Peralta should not need to lean on his curve, but when he lost his splitter (like the one in the middle of the movement chart), he followed with a curveball (and in that instance, issued a single to Trevor Plouffe).

Peralta was getting his strikes, and mixing the curve, and giving up big shots. That's abnormal, that's unexpected, and it has a lot to do with movement. Two strikeouts, two home runs.

The trouble is that little of these problems show from the dugout. Mid-game, the expectation for Maddon to know that movement is suffering on pitches is somewhat extreme. Short of Jose getting up from behind the plate and telling Joe to pull the pitcher for a 'lack of stuff,' I can't pin the loss solely on Maddon's shoulders.

You can make an argument that Torres should have been brought in for the final out of the eighth after the splitter in the dirt, or the walk on five pitches, but the expectation was an easy pop up -- certainly not a second homerun.

As much has been wrong with Peralta this season, in terms of bases on balls and poor movement, the result last night is somewhat of an anomaly.

With Peralta under contract for season to come, at options no less, it will be important to monitor how his control and stuff rebound. He's not broken, but he isn't his high leverage self. As the Rays push towards the playoffs, perhaps a few less high-leverage appearances will do us all some good.