and the Rays beat Matt Garza to reclaim the Wild Card lead.

I'm normally not one to discuss "filrting" with no-hitters, but tonight it seems damn worth it.

Alex Cobb started the game with three swinging strikeouts of Ian Kinsler, Elvis Andrews, and Alex Rios -- all on his powerful change up. Textbook action, incredible bite as it reached home plate. Ten pitches, nine for strikes. Alex Cobb was an ace on the hill.

Adrian Beltre led the second, and struck out swinging himself, this time on a powerful fastball low in the zone. A.J. Pierzynski, the fifth batter, would be the first to put anything into play, a lazy flyball to Wil Myers. Lance Berkman popped meekly to center, and Cobb needed only nine pitches. In the third, Cobb went grounder to second, fly to left, grounder to second on all routine, run of the mill, defensive plays. Ten pitches.

Unfortunately, the no-hitter would be lost when Ian Kinsler guess right on a first pitch fastball, putting the pitch away into the right field corner for a double to lead the fourth. He would get caught waiting out a fielder's choice as he considered home, eventually out on the run-down. 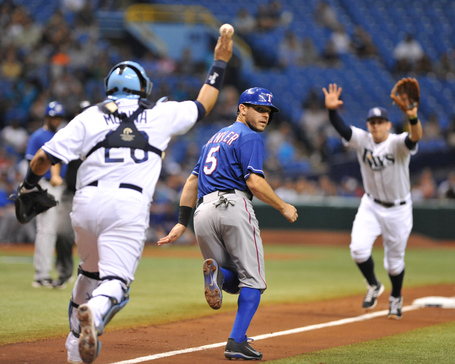 Alex Rios perpetrated the fielder's choice, and he moved around the paths on a steal and a passed ball by Jose Molina, scoring the Rangers' first run by Pierzynski. Cobb answered by striking out Berkman swinging, his fifth of the night. 22 pitches, when he needed twenty-nine before. It was only three innings of potential, but it felt like so much more -- gift wrapped with the assurance of an ace, back in the starting rotation.

Cobb would pitch four more innings of shut-out ball, and it felt so right.

The Rays drew first blood, however, on a Myers home run to lead the bottom of the second. As Staats and Anderson were complementing Myers' second-tier shot from the weekend series in Minnesota, Wil hit a thunder strike down the right field line, a firt-pitch, soaring, opposite field line drive that landed deep. It was Myers' 13th HR on the season, and his sixth longball not pulled. This kid has power.

The Rays almost scored again in the third. Behind a strict strikezone, Garza led the third inning with a walk to Escobar, followed by the first bunt of the evening from David DeJesus, who played with Garza the last two seasons and knew full well the potential in the bunt. Garza fell down as he fielded the play, putting two men on.

Escobar tested the center fielder Leonys Martin's arm on a liner by Zobrist the next at bat, but A.J. blocked the plate well by keeping his left leg across the baseline. Escobar cut around and attempted his slide, but the high tag found his left shoulder.

In the fourth, Longoria reached and sliced a single off the end of his bat, getting a man on for Myers. He broke up the double play on a fielder's choice by Myers. Matt Joyce moved the runner, and Jennings notched an RBI to draw the score level 2-2 before Molina ended the frame with a K.

At this point, with a 2-2 ball game, Garza's fastball abandoned him like the ring abandoned Smeagol.

Myers whalloped the shot to center field -- stand and watch, bat flip -- and it landed at the base of the wall. Given the dramatic pause (which seemed genuinely curious, but still wasting time), settling for a double was a near disappointment.

The rest of the game is essentially a blur. The Rays burned through enough relievers that the Rangers had to call in Neftali Felix, to no avail. The Rays hit some more, the score stayed 6-2. When the Rangers failed to respond, Ron Washington gave the ball to Joseph Ortiz to eat some innings, and the Rays trusted Jamey Wright with the ninth. Both relievers went unscathed.

- Cobb's counterpart was Matt Garza, he of dubious record throwing to first base while fielding bunts. The Rays had players practicing their bunts pregame, in full view of the Rangers to see. True to form, Garza still hops over the foul line as he takes the mound. It was a strange thing to watch him pitch in a Texas uniform.

- Leonys Martin leads the majors in outfield assists with 11.

- I'm not eager to discuss attendance, because sh*t's tired, but here it goes. The Rays are among the best teams in baseball in regards to television ratings, and a rainy Tuesday 90 minutes away is not going to draw a massive crowd of Floridians. The Rays had a 1/3 capacity this evening, and that's just dandy for wid-week games.

- The Rays are now in sole possession of the American League Wild Card, with three games remaining against the Rangers. Hell yeah.

All smiles tonight from Wil Myers and Alex Cobb...and hopefully all Citizens of Rays Republic: pic.twitter.com/pmbR3FOPZF