The Rays Tank: Top of the morning, top of the Wild Card

The American League Wild Card race is getting cozy, as the Rays now sit at the top with the Rangers, Indians, Orioles, Royals and Yankees close behind, separated by only a mere 2.5 games.

Share All sharing options for: The Rays Tank: Top of the morning, top of the Wild Card

Some wins just feel more like wins than others.

Last night, Alex Cobb's dominant performance over eight innings, allowing six hits and only two runs, along with a lively offense that notched 12 hits for the first time at home since July 14th and scored six runs, allowed the Rays a 6-2 win to open up their four-game set against the Rangers.

Danny provided a thorough post game recap of Cobb's stellar night and a play-by-play of the offense's success against Matt Garza.

The Rays also got help from some old pals last night, as James Shields and Wade Davis led the Royals over the Indians 7-1 with Shields striking out 10 in six innings of work and Davis providing an inning of scoreless relief.

Mind you, as I know you already now, the starting pitcher for the Indians last night was another familiar face: Scott Kazmir. It was like a 2008 Rays pitching reunion across the majors, with Edwin Jackson on the mound for the Cubs as well; though his night wasn't so pleasant.

With the Rays win and Rangers loss, plus all the other teams in the mix, the Wild Card standings now appear as so: 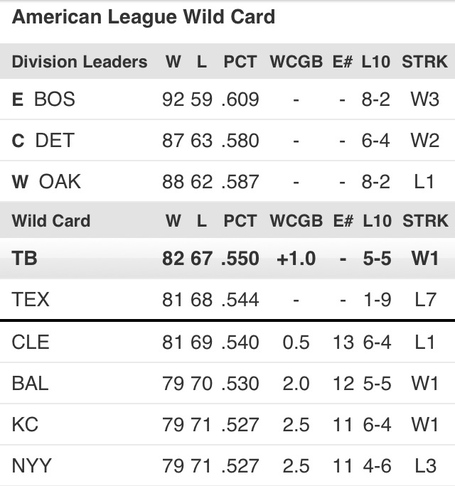 Jesse Crain threw a 30-plus pitch session on Monday afternoon, and graded it an "A," though how he feels today will be the determining factor in when he joins the bullpen.

- Bradley Woodrum took a look at the Rays and the Giants and their multi-run home run hitting struggles.

- Jess Passan provided 10 players who will most impact the pennant races. For the Rays? Evan Longoria.

- The AL Wild Card is bananas, and this week's scheduling is B-A-N-A-N-A-S.

- Jesse Crain is from Boulder, and is raising money for flood relief in Colorado.

- Glen Perkins is one cool dude.

- Have some Q's for Gabe Kapler? You can ask him, via Daily Gammons.