The Anatomy of Stealing Second Base

The Rays have struggled stealing bases this year, so a fan decided to show him how it's done.

Share All sharing options for: The Anatomy of Stealing Second Base

The omen you've been waiting for: The Rays are going streaking?

This fan apparently did a somersault over the visiting dugout, landed, crouched (you know, to not raise alarm), and then took off for second base.

Here's a photo journey of the young man's plight

The land and dash towards second is possibly my favorite aspect of the streaker's attempt to make a show, but unfortunately this is the least documented aspect of his streak. The photographer pics up when our streaker reaches second. 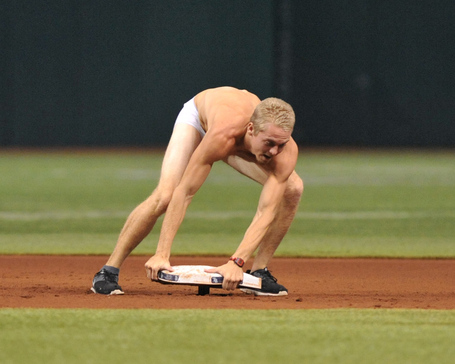 Snatching the bag mid run seems like a difficult task. Time restraints aside, a clean lift might have cleared the bag and gotten him on his way.. to... uh, where was he going? 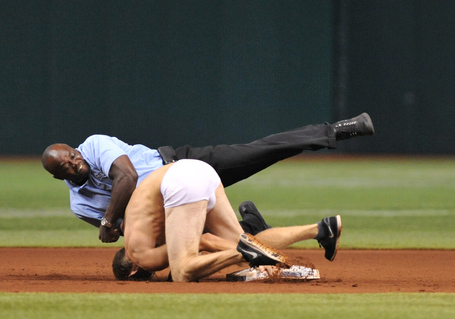 NO MATTER. This is where the advantages of garnering attention by streaking comes up and smacks you in the face. Police brutality at its finest, but I'm not sure our security guard knew who he was dealing with. 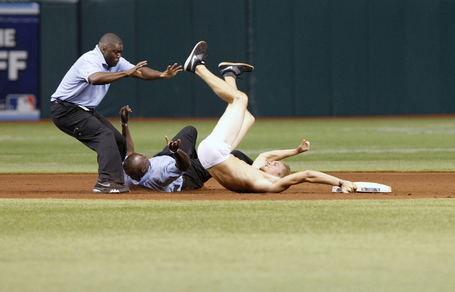 The young man's somersaulting skills came in handy yet again, and captain underpants was able to vault the initial tackler towards the oncoming security guard. 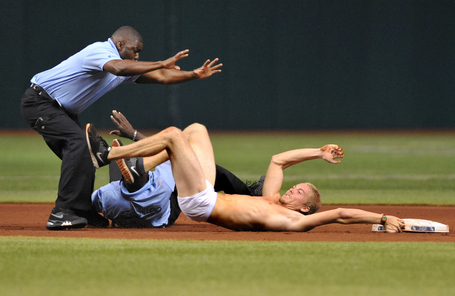 Our second security kept his distance, however, and recovers his balance, which spells doom for our assailant. Note the champion base stealer has even managed to keep his hand on the bag. Clearly safe.

Unfortunately, this was the end of the road, although what came next was somewhat unexpected.

The two engaging security guards jumped on top of our naked warrior to make sure he didn't escape -- which makes me ask, why? Is it necessary to jump on top of the mostly naked guy??

After he was finally tackled (yes, not even Rays fans can successfully steal second), Davis Williams caught the ensuing dogpile on tape.

Which leads us to the photo above. 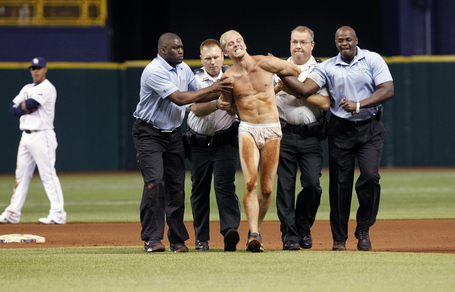 All Photo Credit to Al Messerschmidt and Getty Images.