The Rays Tank: One More Week

The Rays magic number sits at 6 with 7 games remaining in the 2013 season.

Share All sharing options for: The Rays Tank: One More Week

Thanks to some dominant pitching, fantastic defense, and a bit of some offensive production, the Rays defeated the Orioles 3-1 yesterday. In his major league debut, Enny Romero was fairly solid for the Rays, allowing only one hit over 4.2 innings. He struggled a bit with putting batters away, as he walked four, but his pitching looks very promising. Erik highlighted Romero’s big day in yesterday’s recap.

Wil Myers made an outstanding catch and throw back to the infield during the fifth inning yesterday. The hustle was nice to see from Myers and it seems like his discussion with Joe Maddon earlier this week may have actually made an impact. Desmond Jennings is listed as day to day with tightness in his hamstring, after being removed from the game in the late innings yesterday. The Rays' skipper had the following to say about Romero's pitching performance:

Today, Chris Archer takes the mound as the Rays look for a sweep against Wei-Yin Chen and the Orioles. In Chen’s last start against Tampa Bay on August 21st, he went seven innings, allowing only two earned runs off of six hits and three walks, while picking up the win. It looks like we could possibly see Jesse Crain pitch for the first time in a Rays jersey today as he is expected to be activated and available. Per Roger Mooney of the Tampa Tribune, the Rays will DFA JD Martin to make room for Crain on the 40-man roster.

Today also wraps up the Rays 2013 regular season at home. The game is scheduled to start at 3:10 PM. After the series finale today, the Rays head up to New York for a three-game series against the Yankees before wrapping up the season in Toronto.

With seven games remaining in the season, the AL Wild Card is still very much in anyone’s hands. Courtesy of MLB.com, here’s a look at where the contenders currently stand: 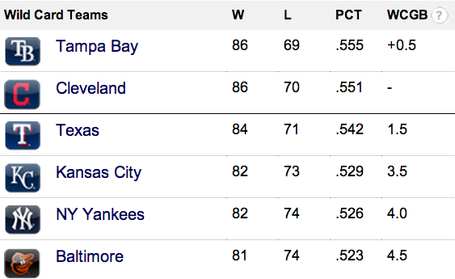 Yesterday, the Rangers were defeated by the Royals, via a walk-off grand slam from Justin Maxwell. The Indians beat up on the Astros, defeating them 9-2 to maintain their position for the second Wild Card spot. Cleveland hosts the Chicago White Sox next, while the Rangers play host to the Astros. The Royals will fly up to Seattle for their next series.

-There were "bee-delays" in Anaheim yesterday, but that didn’t stop King Felix from dominating the Angels.

-This shouldn’t come as much of a surprise. Jose Molina was listed as the league leader in catcher framing, according to Ben Lindbergh of Baseball Prospectus.

-Scott Boras wants the first two games of the World Series to be played at a neutral site.