The last home game of the season came with ideal conditions for a team in Florida struggling with attendance: 3:00 PM on a work day, on a rainy day. Thanks Bud Selig!

Before a crowd of 17,830 people (way more than I was expecting), Joe Maddon started an unconventional defensive alignment to give rest to the likes of Desmond Jennings (left hamstring) and James Loney (can't find bat). Sam Fuld and Sean Rodriguez took their slots, respectively, and Maddon moved Ben Zobrist to left field, opting to give former top draft pick Tim Beckham his major league debut, playing at second (batting seventh).

Myers led the charge by smacking a hard liner past J.J. Hardy in the second inning on a full count, with the Rays broadcast calling it the hardest hit ball they've seen this season (105.5 mph bat speed), and the Designated Hitter Delmon Young drew a walk to put two on, none out for Yunel Escobar (batting sixth).

Some evasive maneuvering on the base path by Myers resulted in a fielder's choice at second, and Beckham got his first at bat on the starting roster with runners on the corners. He cut under the pitch, and gave it a ride to the warning track in right field, netting his first RBI on the sac fly. 1-0 Rays

Meanwhile, Chis Archer was dealing. He allowed one walk and struck out four batters over the first three innings (19-13-11 pitches). It didn't last the second time through the line up.

Leading off the fourth, Machado found a bloop single, and a hanging slider to Crush Davis gave Baltimore their first lead since the seventh inning on Friday night. Archer wasn't intimidated, however, and used the slider again to strike out Adam Jones swinging on a full count. 2-1 Orioles

Notably, Archer had abandoned the use of his change up throughout the game, and even after another single and a pop up out, and a ten-pitch walk to Markakis for two men on, he still wasn't moving away from high heat/slider. J.J. Hardy read a fastball and lined to left field for another run. Facing his eighth batter, Archer was fortunate when Ryan Flaherty went around on an 0-2 pitch that made contact with his foot, ending the inning. 3-1 Orioles

Delmon Young swung outside and made solid contact for a lead off single. Escobar grounded into a double play, but Beckham followed Young's example, swinging away and making solid contact. The expectation is that Wei-Yin Chen might have been trying to pitch just outside the zone, but by creeping over the plate he was giving the Rays chances.

Sure enough, Jose Molina was able to follow on a pitch inside that stayed over the plate, and drove a double to the left-center corner below the Captain Morgan party deck, scoring Beckham from first. 3-2 Orioles

But here come the Fighting Showalters. Brian Roberts took another misplaced slider for a ride, and tucked a liner behind the foul pole in right field. 4-2 Orioles

Archer came back with a strike out of Machado, but Maddon wasn't pleased and lifted the rookie after 4 1/3 innings, nary a change up to be seen. 5 H, 4 ER, 7 K with two home runs.

Facing Chris Davis, the skipper turned to the most opposite pitcher possible: LOOGY Wesley Wright and his nasty, nasty change up took over for Archer. Unfortunately, his 3-1 pitch missed low, and he was immediately lifted for the suddenly-high-leverage reliever Brandon Gomes. He sat down Adam Jones on three pitches -- getting the whiff on an excellent splitter -- and (curiously) Maddon was at the hook again.

Two outs in the fifth, one on, Maddon brings in Alex Torres. The fastball was leaving his hand with action but elevating a bit much. Markakis laid off the pitch above the zone on the first two attempts, but whiffed to end the inning on a 2-2 count. Four pitchers, 59 pitches, and the game reaches the midpoint.

Returning to the mound after a lonnng wait, Chen's first pitch was very hittable. Sean Rodriguez got a pitch slightly above and away from center, doubling on a liner off the right field wall. Chen was able to catch Zorilla swinging outside on a pitch too low to reach, and then was lifted himself after 4 1/3.

Longoria gave Josh Stinson a ride to the warning track for the second out, and Myers grounded out to second.

Baltimore continued it's soft-hitting ways, getting another hit to land in the shallow outfield with a leading single by Wieters. No matter, Torres was able to leverage his fastball to get Nate McLouth on a full count liner caught in left field by Zobrist (who showed some arm, nearly gunning down Wieters returning to first base). Torres would finish the frame cleanly.

Stinson returned, and Delmon Young recorded his first out, wrongly looking for offspeed and getting fastball away. Escobar hit a first-pitch flyball to right, and Beckham grounded out. 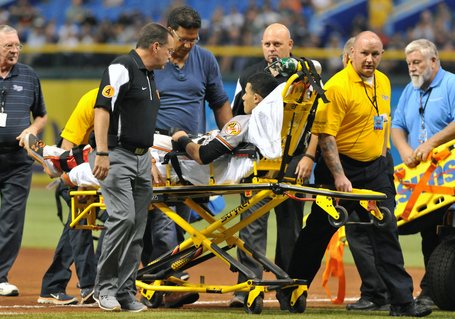 Running out a groundball, Manny Machado stomped on the back of first base, twisted his left knee, and crumpled on the dirt. Holding his leg, writhing and screaming, it was difficult to watch. Especially painful watching one of the young stars in the game.

Rays team surgeon Koko Eaton was immediately on the field, apparently stabilizing Machado's left knee, an air cast was placed on the leg, and he was carted away with tears in his eyes.

Alexi Casilla pinch ran for Machado, and took second on a wild pitch. McGee responded well by getting Chris Davis swinging on a 98 MPH fastball away. After intentionally walking Adam Jones to bring up Markakis, who lined into left field. Zobrist charged and sent the ball home, and Molina blocked the plate well. Casilla whiffed on his reach for home plate, and Molina was able to lay the tag after the slide for the dramatic out at home.

The play brought life back into the Trop, after the raucous crowd had been silent since the Machado injury.

Brian Matusz took the mound, and took care of business. Maddon pinch hit DeJesus and Lobaton (for Molina and Fuld), ending in a ground out and walk. Sean Rodriguez was called looking on a fastball off the plate, and Zobrist got a similar pitch higher in the zone in the next at bat, but Zorilla sent it to center, putting two men on and bringing Buck Showalter out of the dug out.

The Orioles brought in somewhat-submariner Darren O'Day for Evan Longoria --  two on, two out -- and team leader showed some patience after fouling and whiffing hard sliders away.  O'Day hung the next slider, and Longoria crushed it... cutting just left of the foul pole. Longoria fouled the next slider, and then laid off a fastball inside to walk the bases loaded.

O'Day got a generous first pitch strike a Myers' knees, and Myers was able to cut under a slider away. Alexi Casilla tracked the pitch to the middle of right field and came up short -- so he dove for the ball. It was nearly disaster again, my friends. Casilla's head made hard contact on Markakis's right quad, who was ready for the incoming flyball, and Alexi lost the ball he'd caught. [VIDEO]

At first, it seemed Casilla had lost consciousness, but the Orioles players came up without serious injury and stayed in the game. Two runs scored, and the Rays tied things up. 4-4 Ballgame

Casilla will remain in Tampa to undergo observation over night.

Runners on the corners, Delmon Young made an attempt at making it a lead, but the hard liner failed to drop in left-center, and the Orioles escaped the threat.

Jamey Wright took over (not the warmed up Jesse Crain). Zobrist had a difficult time tracking a Matt Wieters flyball to the left field wall, and it caromed to the visiting bullpen. Wieters made the attempt to stretch it into a triple, but Zobrist gunned him down well in front of the slide.

Nate McLouth saw the shift to the right side, and dropped the slowest of rollers on a bunt, splitting the defenders. Rodriguez left the bag to field the play, and Beckham broke for first, but the reverse might have been beneficial. The defenders stop to admire and McLouth was able to run through the confusion to second base.

No matter, Wright got a Hardy pop up to short, and a Flaherty groundout to Beckham (in the shift again) for the third out.

Tommy Hunter took over for Baltimore, and led with a walk of Yunel Escobar. Given the splits advantage, Maddon lifted Tim Beckham for Matt Joyce (3-for-8, HR vs Hunter). He worked a ten-pitch walk on a missed call low in the zone to put two on. DeJesus bounced into a difficult double play (the 50th DP in 44 games, according to the broadcast), and LOBaton grounded out meekly. The tie game persists.

Joe Maddon trusted Joel Peralta with the game locked at four runs apiece, and his faith was rewarded. Brian Roberts led with a fly ball to the right field warning track, a towering fly from Danny Valencia almost got lost in the lights by DeJesus, but he nabbed it in shallow center, and Chris Davis took strike three looking at a 91 MPH fastball low, but in the zone.

Tommy Hunter returned, and James Loney stepped in for S-Rod. After fouling a pitch inside, Loney gave a similarly located 96 MPH fastball a ride to the right field stands, and the Rays had themselves a WALKOFF. Rays win!

Loney got a dance party at home plate, the gatorade bath treatment from Yunel, and the Rays sweep the rival Orioles! 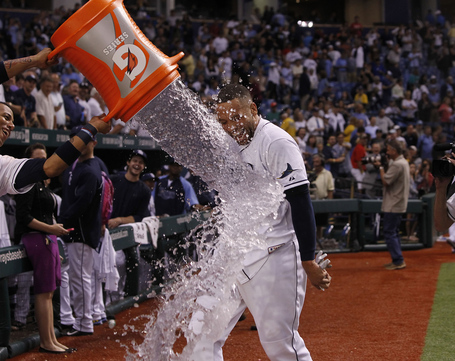 #Orioles Manny Machado carted off field with what appeared to be a meniscus tear based on injury mechanism.

If #Orioles Machado indeed has meniscus injury, surrounding ligaments esp. MCL can be suspect to injury. MRI would determine severity.

- Having pitched 4 of the last 5 games, including each game in the Baltimore series before today, Fernando Rodney was not available out of the pen.

- This was the Rays' 13th walkoff of the year, tying the franchise record. Something to keep in mind as the Rays seek the playoffs. One run games are quite the market inefficiency.

- Tim Beckham showed good instincts on the field at second base, despite some bobbles and missed communication in the infield throughout the game... Remember that he's 23.

- Joe Maddon made a ton of bullpen moves throughout the four game series, and it ended in success each night. Credit where credit's due, no?