Elimination game at the baseball cathedral

A report from the outer boroughs of Tampa Bay.

Share All sharing options for: Elimination game at the baseball cathedral

Let me start off with an apology, as I will likely seem a pill. Think of us Rays fans as small rodents. We're normally pretty cute, as long as we're kept clean and loved, but most of the time we aren't loved. Our ballpark is ridiculed and our quality is suspected, except in the cases where our very existence is doubted. Even a nice white rat will hiss and snap at fingers if it feels itself cornered.

First off, I arrived at the ballpark early, but entered late. The friend of a friend who had my ticket is a fine but notoriously tardy fellow. I'm not sure I can blame the Yankees organization for this particular mix-up, but I do. Upon entering, I bee-lined it to the beer, where I ordered a Goose Island IPA. Goose Island is a perfectly enjoyable brew, but it comes from Chicago. New York is full of great beers, but the Yankee Stadium has none of them (Citi Field does). Anyway, 2/3 through the pour, the Goose Island keg kicked. The bartender, rather than give me the already poured beer in addition to a full one, as is traditional when a keg kicks, poured it out and asked me what I would like instead. Note, as this comes into play later, that the sign clearly indicated "two beers per person," so it was not against regulations for me to walk away from the kiosk with two beers. Strike one.

Next I went to my seat in section 201. Note the view of left field. How far did Eduardo Nunez's third inning home run go? I have no idea, and my life is significantly worse for that fact. Strike two. 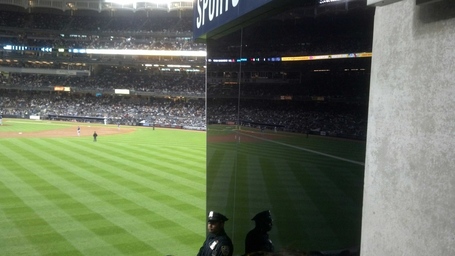 I sat down just in time for the start of the third inning, and one thing immediately became clear: Vernon Wells is a terrible fielder these days. UZR has ranked him as positive in the outfield this season, but based on my one evening of watching him in left field (since that was all I could see), I reject UZR as a defensive metric. He plays deep, charges balls slowly, goes back on balls poorly, and was generally awful. The Yankee fans around me were discontentedly muttering "He's lost out there," and "Put in Ichiro." I agreed.

Some time in the fourth inning, I overheard a middle-aged fan in front of me explain to his 12 or so year old daughter in reasonable and accurate terms why, despite the fact that David Price was a good pitcher, the Rays were unlikely to keep him for much longer. I was impressed.

A friend got a bucket of chicken tenders and fries. It was an large bucket, but there were only five tenders, and about two pounds of fries beneath. Similarly to The Trop (and unlike at Citi Field), I could not find any good, local fare. I was unimpressed.

The same friend and I went to buy second beers for the rest of our group, and we encountered a strange system. While the kiosks in the 100 level will sell two beers to one person, the kiosks in the 200 level limit it to "one beer, one person." I attempted to reason with the lady that I was paying for my ticket by buying other people's beer, and I didn't want to miss the game by walking downstairs (the sight lines aren't good). Unmoved, she repeated "one beer, one person." We attempted to solve the problem by taking our two beers, walking three paces away to transfer the beer, and the other guy getting back in line while I delivered them to our seats. We were told that we would not be served, and were not welcome back. Strike three.

The well-informed father and daughter left after the sixth inning. bringing down the baseball knowledge of my section by half.

In the eighth inning, with the Rays up 7-2, a chant started up in my area (near the bullpen) of "We want Mo!" Meanwhile, there was actually a game going on. The Yankees loaded the bases against Brandon Gomes, prompting Mariano Rivera to start warming up, and my entire section to crowd to the edge of the wall in a mad rush to take his picture. When Joel Peralta walked in a run, the tying run was at the plate; curiously, I saw the wave start on the other side of the stadium. One lady (Yankees fan) a few rows in front of me was paying enough attention to know to throw her hands up in triumph when Curtis Granderson hit a routine grounder directly to Kelly Johnson.

I decided to walk down to the area behind the Rays bullpen for the ninth inning. To get there, one has to pass through a long tunnel with no view of the field and no TVs. I legitimately didn't know that Evan Longoria had hit his second home run until I read Gareth's recap this morning. And like the Nunez homer, my life is now considerably worse than it might have been. Finally, I can report that Yankees ushers are very particular about not letting riff-raff squat on unoccupied lower level seats.

None of this is to say that I didn't have a good time, that the weather wasn't beautiful, or that my fellow attendees were discourteous. This is merely a reaction to every out-of-towner who has an unseemly love for discussing C-rings. I'd love to hear more stories from games seen at home and around the country, either in the comments or in Fanposts.