Rays vs. Angels GDT 2: How about today?

Mathematically speaking, it *is* possible for the Rays to lose out. But maybe today starts a win streak?

Share All sharing options for: Rays vs. Angels GDT 2: How about today?

This is a hard pill to swallow, but the Rays offense has not been terrible over the last 14 days: 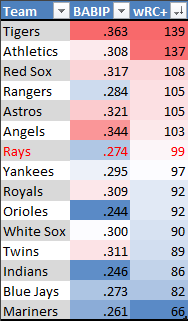 But when the bases get juiced? Lately that has been a death knell. Players have been pressing, yes, but at some point events are going to cluster in a favorable way, and the Rays will finally have a chance to lose a game not because the offense couldn't close, but rather the bullpen couldn't.