The majority of baseball research done on my end goes unpublished. I could spend hours pouring over MLBAM data, tracking flight paths of change ups, trying to decipher defensive zones, and all kinds of things and never have something to show for it. As someone who wishes to publish often, this is incredibly frustrating.

So I'm asking your permission to be wrong, or at least to speculate in this article.

Yesterday, I discussed Hellickson's performance with men on base last season, and how much of his difficulties seem tied to his in-play batting average. There are many other factors I did not discuss, however, such as Hellickson's delivery pitching from the stretch, which was helpfully pointed out by Jason Collette as a contributing factor.

Another un-discussed item were the pitches Hellickson uses, and one in particular I found to be discouraging as I was digging through the data.

Hellickson pitches with a knuckle-curve, already among the easier pitches for a batter to read, but Hellickson was not doing himself any favors last season. Compared to the rest of his pitches, the knuckle-curve has a much higher release point. 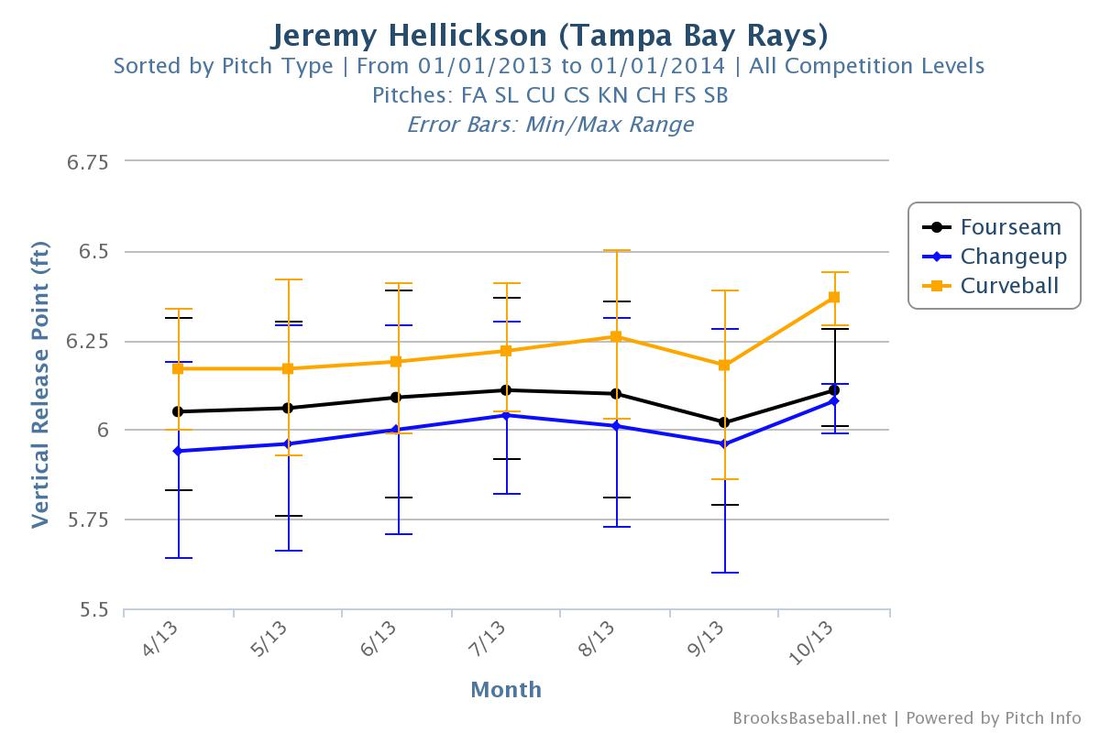 I'm worried that his knuckled grip might have, or will, become quite obvious to batters, and I would like to provide a base for discussion as to whether this is so.

Here is an example of Hellickson's knuckle-curve grip: 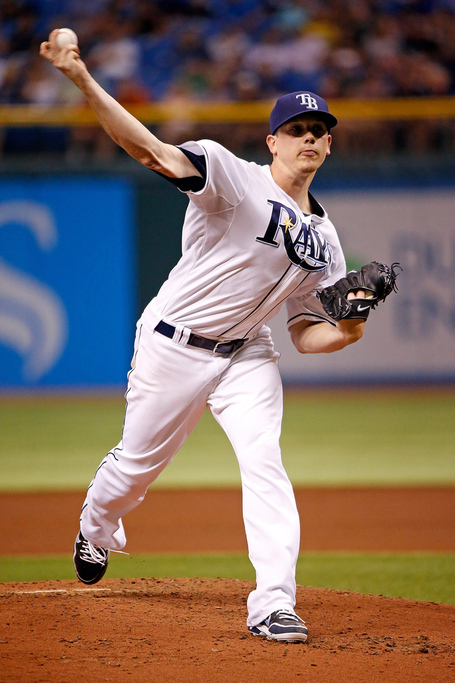 The curve is Hellickson's third-most used pitch (after the fastball and change) at a 20% frequency against both handed hitters, and normally employed once he's ahead in the count.

He began losing effectiveness of the pitch in May, and perhaps in an attempt to compensate, Hellickson started raising his arm more than usual, eventually reaching a release above 6.2 feet -- first featured against Miami on May 28. This adjustment clicked as Helly threw 12 curves for a .000 BAA.

The next game, on June 2 against Cleveland, Hellickson returned to his normal release point and got his old (bad) results, so in the following outing the release point was elevated again.

So he tried it again, and only four curves would be put into play in his final June start.

The trend was on.

Over the following four starts in the month of July (two before and two after an "injury" -- mentioned later), Hellickson threw 52 curves for a .000 BAA, all of them elevated above 6.2 feet.

Unfortunately, it would appear this did not make for a great process.

In August, the wheels fell off the curve once again, and Hellickson began toying with the release point between games without the desired effect.

Outside of one start against Toronto on Aug. 16 -- where Hellickson used 20 curves and not one fell for a hit -- the pitch would get shelled throughout the rest of the season. He would use the curve ten or more times in only three games to finish the year.

All of this raises the question of diversity in pitches. Say his curve has lost its effectiveness, and the trick of raising his release point has lost its charm. In this scenario, Hellickson would be limited to his fastball and change with no true other offering. Hellickson had previously dabbled with a cutter but the pitch has been mostly ignored.

Hellickson's curve has always been thrown about a quarter inch higher than his fastball, but if his arm slot continues to rise, he may lose his ability to hide the pitch from the batter's view.

And his arm slot is rising.

Normally I don't put much stock into release points, as they have the highest margin of error of PitchFX data, but we can observe that there was not only a shift toward a higher release point prior on the curve last season, but in general.

Most pitchers experience a decline in velocity over the course of each season, but not all. Hellickson has his struggles, but he hasn't had a dramatic loss of heat. 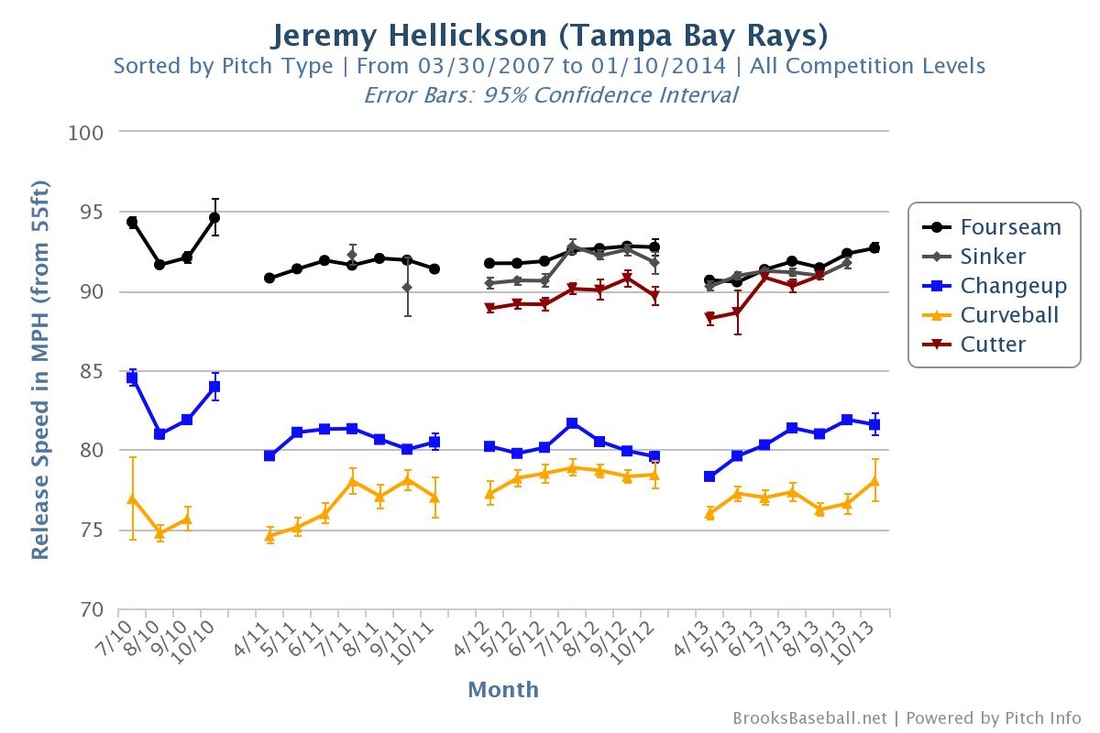 Hellickson has been able to maintain a relatively consistent speed by adjusting his vertical release point, thereby increasing his downward plane and putting more behind his stuff. At least, that is my impression: 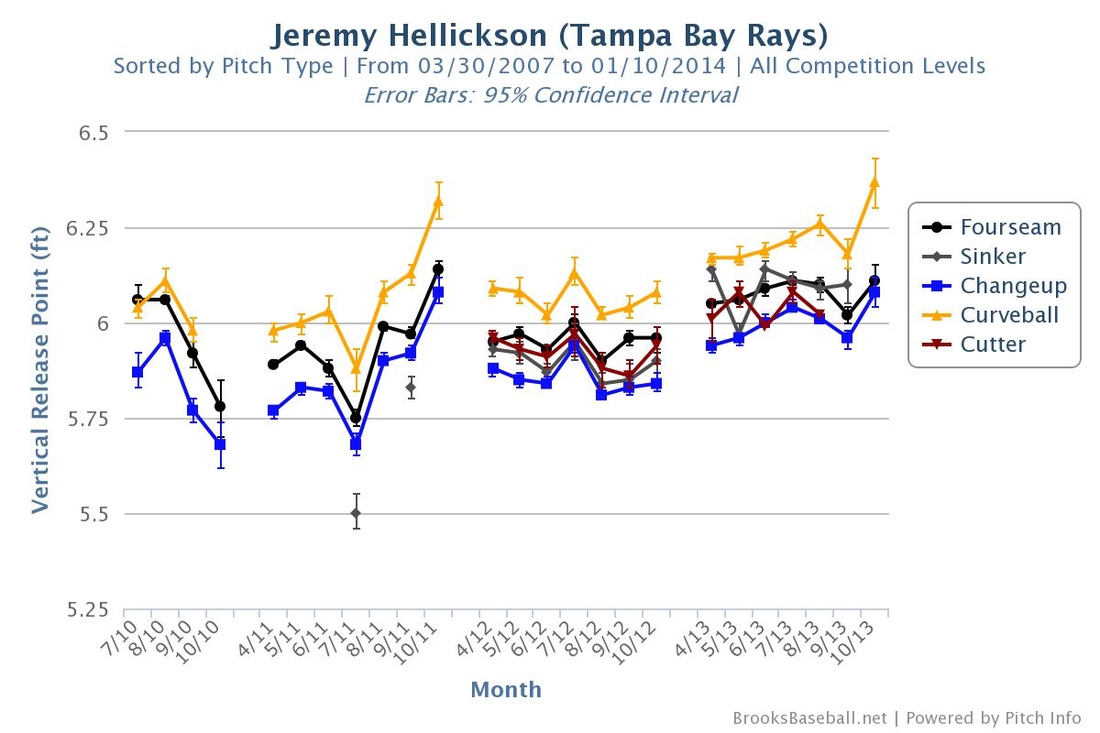 It's a normal adjustment that many pitchers make over the course of their careers. Fine and well, as long as you don't get hurt and your stuff stays effective.

Last season it became clear that Helly was over compensating when his velocity peaked over two games at the end of July. Shortly after the two game spike, Hellickson was injured enough that the Rays optioned him to Class-A so he could rest, missing one start. Could this have something to do with his vertical release point?

Hellickson's adjustments are inside a quarter inch, which is within the margins of game-to-game adjustments, but the change in 2013 was consistent throughout the year, before and after the injury.

Therefore, I would not conclude that Hellickson's mid-season injury was the result of release points.

I worry, however, that the increasing release point may spell the end of his knuckle-curve.

Maybe I'm making something out of nothing, but perhaps the pitch is losing its effectiveness because Hellickson has reached his limit on masking his grip and arm slot. What if he needs to increase leverage next year and raises his arm again?