The Rays Tank: MLBTR polls readers on David Price; Rocco gets some love

Share All sharing options for: The Rays Tank: MLBTR polls readers on David Price; Rocco gets some love

MLB Trade Rumors polled it's readers yesterday, asking when David Price would be traded. The majority thus far has been "Between Opening Day and the Trade Deadline" with 37.5% of the vote, while "After the 2014 Season (if at all)" has surged to second place at 31.3% of the vote.

Less than a quarter of readers, as of this publishing, think he will be traded before Spring Training, which in my opinion is a shocking change in the tide of public opinion. MLBTR has over 15,000 responses since 6 PM last night.

We here at DRaysBay have been long preaching that the Rays do not need to trade Price, financially or talent wise, and that they would not unless the return was better than the Shields-Myers trade and brought back a major league ready starter.

My personal thought is that the best suitors for Price in a trade (Cubs, Astros, Twins) are not ready to acquire a frontline starter, and I voted "After the 2014 Season (if at all)" in the poll.

What say you? I've duplicated the poll below.

Rocco Baldelli still holds a place in my heart. After the former top prospect battled and eventually backed away from the spotlight with Mitochondrial Channelopathy, which causes extreme muscle fatigue, Rocco joined the Rays front office, and we last saw him throwing out the first pitch for Game 4 of the ALDS against Boston last October.

To start the New Year, mlb.com's Bill Chastain profiled Rocco's transition to a front office role as a "special assistant" for baseball operations, which includes scouting and minor league coordination. I couldn't be prouder or more thrilled that Rocco has been able to overcome his difficulties and find a valuable place in the Rays front office. It's a reflection of how much the Rays care for their players, and the determination and spirit of the players they value most.

The other player to wear No. 5 for the Rays has been Sam Fuld, who is still on the free agent market. He's reportedly weighing offers from five teams, all of which appear to be minor league deals. Much like Baldelli, the Legend strikes me as the kind of guy who will stick around and help front office operations, is still an incredible defender, and has come to represent the Rays well in popular culture. Keep fingers crossed that he'll return.

In other news, the Rays signed Jordan Norberto to a minor league deal, as Marc Topkin had rumored a few weeks ago. Norberto is a 27-year old south paw, recovering from Tommy John surgery (performed last June), and still has a fifty game suspension to serve due to his link to the Biogenesis scandal.

A former A's reliever from the 2012 AL West champion team, Norberto did not pitch in the majors last season, and filed a grievance against the Athletics regarding his demotion, which occurred prior to being placed on the disabled list last year. According to Susan Slusser, Norberto will not be attending Spring Training, but will report straight to the minors when ready.

- Jamey Wright signed his fist major league deal in nearly a decade, agreeing to return to the Dodgers on a one year deal just shy of $2M. He was rumored to have narrowed his decision to LA or Tampa Bay. To reminisce, Mike Petriello looks at how Wright has improved with age.

- Jason Collette takes issue with Dan Shaughessy's HoF Ballot, and rightfully so. Meanwhile, Tango has been scoring the released ballots out of 100, of which five voters have received a perfect score. Tampa Bay Times' Marc Topkin scored a 93, while Shaughessy earned a 14.

- Diving into first base is always a terrible idea. No one has felt more strongly about this than my old roommate David. Back in the day, I would always dive into first base when we played MLB2K10 just to rile him up. Cool story, right? Anyway, the Hardball Times gave diving into first a deeper look, including physics! (Spoiler alert: It's still a bad idea.)

- In Tampa Bay news, the Buccaneers were able to land their next head coach in Lovie Smith, at the behest of the widely respected local figure Tony Dungy. As our friends at Bucs Nation write, "It's a great day in Tampa Bay."

- Time Machine, from 2011: Matt Klaassen on Rocco Baldelli and what could have been... 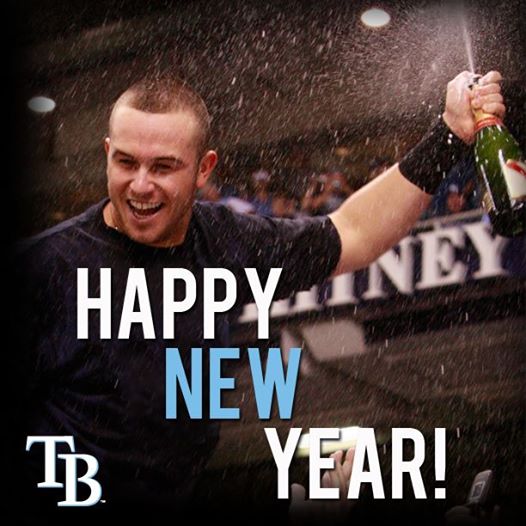