Share All sharing options for: On David Price and $14M

With a sky high asking price in the style of the Shields-Myers trade, the Rays have not been willing to trade David Price thus far in the off-season, and were approaching an court hearing with their former Cy Young winner to determine how much he should be paid. A hearing that would have pulled your ace from Spring Training.

So the team and player avoided arbitration last week at $14M -- nearly a million more than was projected.

Why would the Rays pay him more than expected? Heading to arbitration is risky business. As a franchise, the Rays have never lost an arbitration hearing in court -- with the judge consistently ruling in their favor as to how much a player should cost -- but with Price, there's much to consider.

So this year's payroll is the opposite of sustainable. According to Merriam-Webster, sustainable means:

: able to be used without being completely used up or destroyed

: involving methods that do not completely use up or destroy natural resources

In other words, the payroll can exist for this season, but likely not the next, less the Rays be depleted of their [monetary] resources. This is, of course, just an allocation on behalf of management.

The Rays are a team that is highly profitable. According to Forbes, the Rays grew in value by 40% last season when the rest of baseball great at a rate of 23%. If you think that is impressive: since the team was purchased by Sternberg and friends in 2005, the Rays have grown an extraordinary 251% in value.

And that's without the benefits of a monster television contract.

Tampa Mayor Buckhorn may believe that baseball in St. Petersburg is a "failed business model" when considering attendance, but given their growth over the last eight years, his remarks are somewhat a hollow perception.

Teams leave cities all the time for the sake of a new stadium and the promise of "more" revenue, but it's important to remember that the Rays front office are not an incapable bunch, that they bring in great money and great value every year, and that eventually things will get better.

This year, every team in baseball received an influx of $25M to be spent how they see fit. Down the road, the Rays will receive another influx of money with the restructuring of their television contract, which currently pays $20M per year through 2016.

It would appear that the Rays are more capable of keeping Price on the roster thanks to that $25M influx. To go to court would risk a judge saying Price is worth far more than what the Rays might have wanted, simply due to the obvious growth in resources.

How does that impact the Rays?

Contract details are not available on the $14M salary Price will earn this season, but last year the Rays deferred $4M of Price's $10.1M salary to this coming October. It's currently not clear that any portion of his new contract has been shifted to a future date, which means the Rays are on the hook for $18M in 2014.

Should the Rays hold on to Price, here's how his $18M of salary commitments in 2014 compare to his teammates': 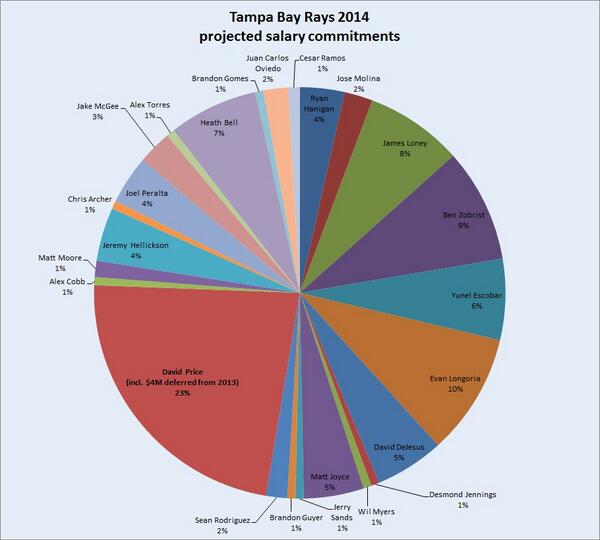 Price's $14M salary is already the largest one year contract in franchise history, but that 23% mark for salary commitments is astounding once all things are considered.

The highest payroll in team histroy was in 2010 at $72M, and with or without Price's deferred salary the Rays have already surpassed that number.

Of course, we are not supposed to get comfortable with such lofty payrolls. This is "unsustainable," but I would ask for how long? Until the Rays have broken free of their lease on Tropicana Field? Until the Rays new TV deal arrives in 2017? Until there is the revenue generated by a World Series? The question goes unanswered.

After the $14M contract was announced, Price acknowledged to reporters that evening that the market is stalled on the landing place of Tanaka, and because of the shortening time window, claims he will likely be with the Rays for 2014 should the team not trade him by Feb. 1.

On the conference call, Price was candid in his desire to not be traded, saying, "hopefully I can stay here for a while." Here being a team that has reached the post season in four of his six years of play.

WDAE asked him point blank if this was true this morning: "It sounds from everything we read and everything you say, you want to be here long term?" His response: "Absolutely."

Price credited familiarity with the players and staff, saying "this is all I know."

At a surface level, Price is saying all the right things about a championship caliber team he is likely to be a part of next season, but what if he really meant it.

What if David Price wants to stay a Ray?