Andrew Friedman took over as the Rays General Manager after the 2005 season at the ripe age of 28. Since 2006, only nine teams have more wins than the Rays. With their shoestring budget, how much of this success can be attributed to acquiring young talent through savvy drafting?

MLB.com recently came out with their Top-100 prospects list, which featured three Rays players, and the Baseball Prospectus Top-101 list is out today. Since it's that time of year where prospect lists can help kill a few days before baseball begins and lifts the spector of gloom that's been hanging around since October 30, 2013, I thought a rehashing of the Rays drafting successes and failures would be relevant.

The following is a year-by-year review of the Rays drafts during General Manager Andrew Friedman's tenure. For a MLB WAR-based comparison to other teams, check out community member rglass44's fanpost (with downloadable data), and Michael Valancius's similar study that incorporated projected WAR for players still in the minors.

2006 was Friedman's first draft, and unquestionably his most successful. With the third overall pick, the Rays nabbed Evan Longoria, who quickly became a franchise player. Besides Longo, this draft also yielded highschoolers Alex Cobb in the fourth round and Desmond Jennings in the 10th round. A franchise player, a solid starter/future ace, and a good centerfielder. Not a bad haul. They also selected Mike Minor in the 13th round, but he would honor his commitment to Vanderbilt and be selected 7th overall three years later.

2007 also saw Friedman strike gold with a top pick. This time, he tabbed David Price with the first overall pick. In addition, they got Matt Moore in the 7th round. Price was a no-brainer after a stellar career at Vanderbilt, and up to this point, he has been the most productive player from the 2007 Draft. Moore has shown flashes of greatness, but a balky elbow and control problems might prevent him from reaching ace status. Now, hindsight is 20-20, but the Rays second round pick, Will Kline, who was selected two slots ahead of Jordan Zimmermann, and 11 slots ahead of Giancarlo Stanton, played all of one year in the minors before arm injuries ended his career.

2008 was the unfortunate Tim Beckham draft, which has been nothing short of a disaster. To this point, Beckham's five game stint this September is the only major league action seen by any player from this draft class. I honestly didn't intend for this to come out on his birthday, but, Beckham looks like one of the worst top overall picks of the past 20 years. It doesn't help that Buster Posey, who would reach the Show the next season, was taken four picks later. 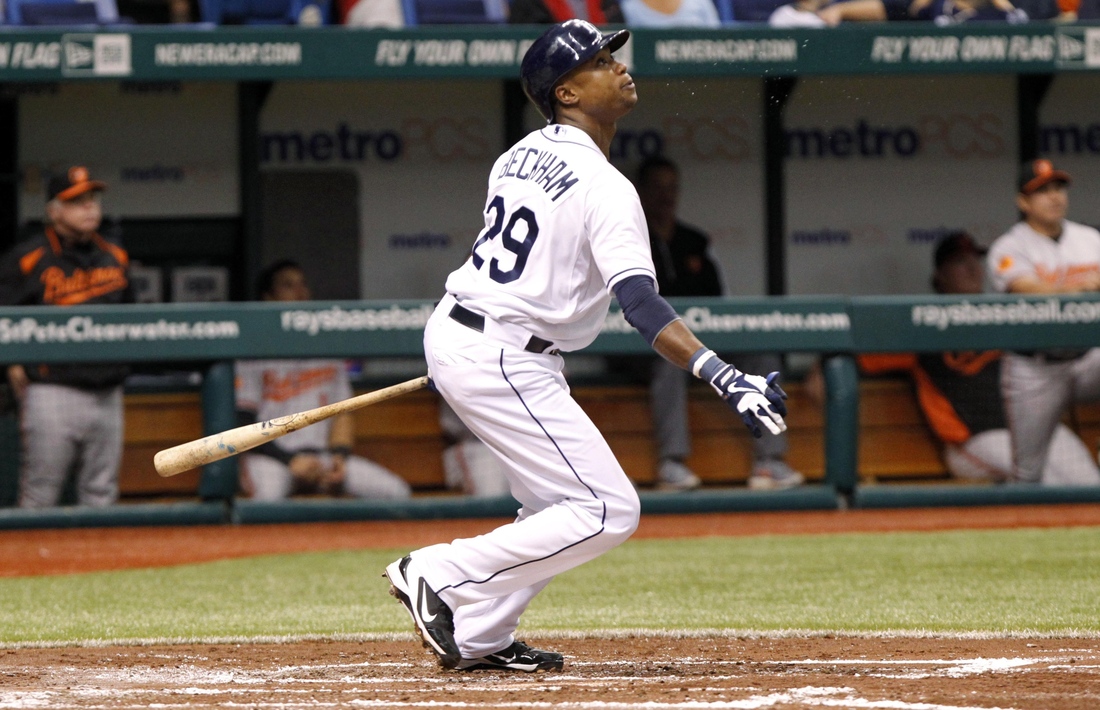 2009 saw the Rays receiving the 30th overall pick. Zac Rosscup, a 28th round selection who was sent to the Chicago Cubs in the Matt Garza deal, and received ten relief appearances for the Cubs this year, is the only player from this draft who has reached the major leagues. Their first two picks, LeVon Washington and Kenny Diekroger, did not sign. Nobody from this draft appears on any of the Rays top prospects lists. Continuing the hindsight theme, Patrick Corbin, a below-slot junior college signing, was selected by the Los Angeles Angels two picks after Diekroger.

2010 first round selection Josh Sale has largely been a disappointment, as he missed 50 games due to a failed drug test in 2012, and this embarrassing incident earned him a season-long suspension in 2013. He's reportedly cleaned up his act, and the 22 year-old has showed talent on the field though he has a lot of ground to make up. Supplemental second round pick Derek Dietrich was flipped for Yunel Escobar last offseason, a trade which has benefited the Rays significantly. Justin O'Connor a supplemental first-rounder and Ryan Brett, a third-rounder, are fringy prospects. 31st round pick Kevin Kiermaier will see playing time on the strength of his outfield defense, and 20th rounder C.J. Riefenhauser could play a bullpen role. Sixth-rounder Jesse Hahn was recently flipped to the Padres as part of the Logan Forsythe deal.

2011 featured an unprecedented seven first round selections for the Rays. Taylor Guerrieri, taken 24th overall, has impressive upside, and rates as the Rays best homegrown prospect. Twice he's received a 50 game suspension for marijuana use, a drug that is not tested for at the major league level. This most recent suspension is essentially meaningless, as Guerrieri will be recovering from Tommy John surgery. On the field, he's managed an impressive 1.59 ERA in over two professional seasons spent at Low-A and Single-A, with strikeout and walk rates of 20.9 percent and 3.7 percent, respectively. There hasn't been a whole lot of development from the other six first round selections, though Grayson Garvin pitched well in the Arizona Fall League after missing a good chunk of the season following Tommy John surgery in 2012.

2012 first round pick Richie Shaffer doesn't lack bat speed or raw power, but he struggled to make contact with High-A Charlotte in 2013, striking out 106 times in 119 games. Andrew Toles, their third round pick, had similar contact issues, with 105 strikeouts against 22 walks in 121 games at Single-A Bowling Green. He did manage a solid .326/.359/.466 line with 62 stolen bases. He's an intriguing prospect if he can improve his plate discipline.

2013 first round pick Nick Ciuffo has strong defensive chops. At 18, he's a long way from the majors, but could develop into a nice all-around backstop. Ryne Stanek, taken with the 29th overall pick, had labrum surgery and missed the 2013 season, and is expected to miss the first half of 2014 as well. His delivery will certainly have to be retooled, but arms like his don't usually last to the end of the first round.

With later selections the Rays have had less success in the Draft. They've yet to receive more than a cup of coffee from any player selected after 2007. While their division rivals the Yankees catch grief for their drafting struggles, the Rays haven't done any better since 2008.

Currently, their farm system has some depth, but is lacking in top-notch talent. They've had success in trading away young pitchers before they reach free agency, and have received Wil Myers, Jake Odorizzi, and Chris Archer, and Hak-Ju Lee through this method. International signings Alex Colome, and Enny Romero show promise. However, the development of recent draft picks and finding impact players in future drafts will be essential for the Rays long-term success.