The AL East is chock full with good centerfielders. How does Desmond Jennings stack up with the competition?

Share All sharing options for: Comparing Desmond Jennings with his AL East counterparts

Tampa Bay Rays centerfielder Desmond Jennings had himself another solid season in 2013. Jennings transitioned from left to fill the vacancy left by the departed B.J. Upton. The leadoff hitter trimmed his strikeout rate and boosted his walk rate, and by season's end he produced 3.2 fWAR. Midway through the season, Dave Cameron ranked Jennings #46 in his trade value series, one spot ahead of teammate David Price.

Shortly after Cameron's trade value ranking, Jennings play took a bit of a turn for the worse. After a first half in which he hit .267/.335/.449 with 11 home runs and a 121 wRC+, he produced a more pedestrian second half slash line of .222/.332/.339 for a 95 wRC+. The power disappeared, and he hit just three home runs. His frustration was best captured by his mother in this tweet.

My mama jus said to me you had 3 strikeouts tonight.. Do you even see the ball?

The AL East is chock-full of good centerfielders. in 2013, Jennings and his counterparts, Jacoby Ellsbury, Colby Rasmus, Adam Jones, and Brett Gardner, produced a total of 21.2 fWAR. With the exception of the NL Central no other division got that much production out of their primary centerfielders.

At 27, Jennings is the youngest of the bunch, beating out Rasmus by a couple of months. Also, as he doesn't hit free agency until after the 2017 season, he's the most affordable of the group. Gardner (who will move to a corner this year) and Rasmus will become free agents next winter. Jones signed a six year extension worth $85.5 million last season that keeps him under team control through 2018, and Ellsbury signed a seven year, $153 million dollar contract with the Yankees through at least 2020.

In addition, Jackie Bradley, who looks to take over the role previously held by Ellsbury as the Red Sox starting centerfielder, is controlled by Boston through the 2019 season. All in all, Jennings could be part of a top-notch group of centerfielders for several years to come, provided that the Blue Jays manage to retain Rasmus. 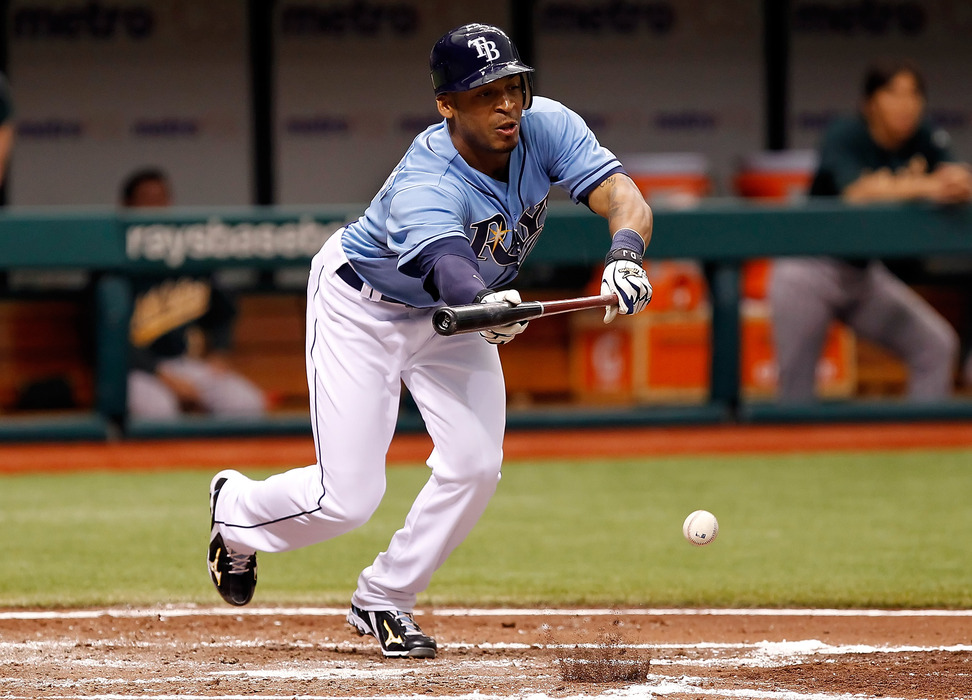 So, how does Jennings compare to the rest of the group?

First of all, let me point out that he's wearing Mizuno cleats in this picture. I made the mistake of wearing Mizunos at one time in my college career, and let me tell you, the team discount wasn't worth the feeling of running with cement in my cleats. Or maybe I was just very slow. Anyways, Jennings gets docked a point for wearing Mizunos. I digress.

In 2013, Jennings 3.2 fWAR was fourth among AL centerfielders, tied with Gardner. Jones totaled 4.2 fWAR, Rasmus had 4.8 fWAR, and Ellsbury topped them all with 5.8 fWAR. Bradley had -0.2 fWAR in his 107 plate appearances. While Jennings was good in 2013, the rest of the pack was just as good or better. However, the primary focus of this question is forward-looking.

Looking to 2014 and beyond, Jennings compares favorably with Ellsbury, Jones, Rasmus, and Bradley.

Jennings' Oliver projections tops any projection for all the other AL East centerfielders. However, it's based heavily on defensive value. According to UZR, his best defensive season was 2012, when he was +6 in left field. Last season, he was -3.7 in center. Of course he could improve with more experience in center, but expecting him to go from slightly below average to elite is asking too much.

Looking at the ZiPS and Steamer projections, Jennings is on par with Jones and Rasmus, and a little behind Ellsbury. Bradley looks like a decent option if less than spectacular option for the Sox. Jones gets a lot of love in the Gold Glove voting, but defensive metrics don't like him. He'll hit for a good average with power production, but he makes a lot of outs. Rasmus is a bit of a wild card, as he seems to alternate terrible seasons with excellent ones. Ellsbury has the highest ceiling of the group, but he's had trouble staying on the field. Overall, the projections lean more toward Jennings' career numbers instead of his excellent 2013 first-half numbers.

If he doesn't regain the power stroke, Jennings is still a solid player. He's very athletic, so the speed and defense shouldn't go anywhere over the next four years. Combine that with at least average production at the plate and you have a player with a high floor, albeit one that won't be featured in the trade value series next year.

Still, at age 27, Jennings might have some offensive upside left. Power is often the last tool to develop for young players. There's enough offensive ability to where he could conceivably be a poor man's version of Andrew McCutchen or Carlos Gomez, an up the middle player who contributes at a solid level in all aspects of the game. If he can do that, he'll be the best centerfielder in the AL East. But seriously Desmond, ditch the Mizuno cleats.