Dock of the Rays: Finding another catcher

Share All sharing options for: Dock of the Rays: Finding another catcher

The Rays may or may not need one more catcher come 2015, and that depends on how highly you value Curt Casali.

The Rays typically enjoy having three catchers in Triple-A to support two at the big league club, and this year's depth already has prospect Luke Maile and minor league signee Bobby Wilson in Durham. Recently acquired Rene Rivera profiles as a back up catcher, but the Rays haven't been shy to start non-conventional catchers in more prominent roles in the past. Then there's Curt Casali, a definite back up if he makes the club, and room for one more. 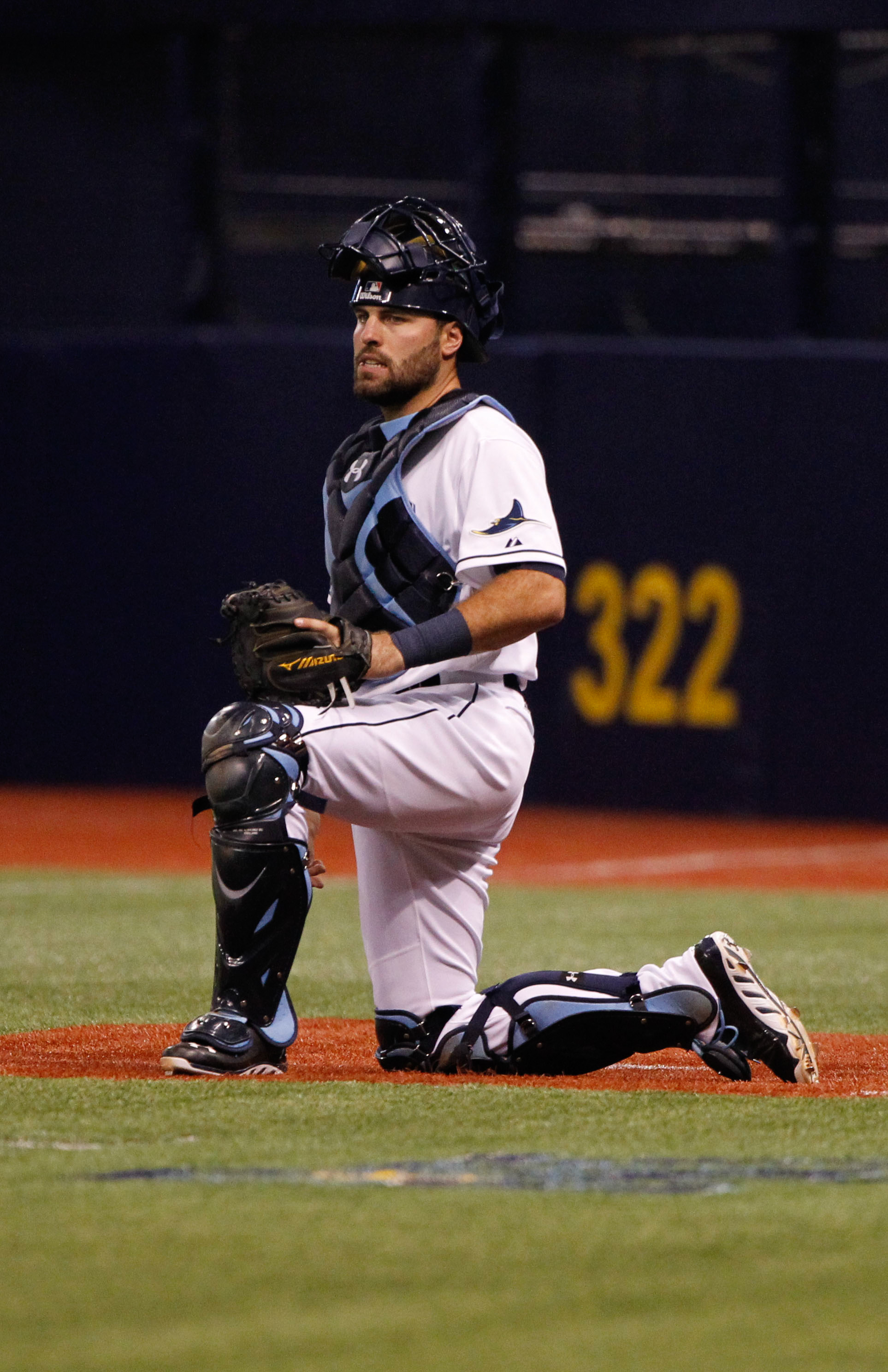 Casali entered last season as the third catcher on the depth chart. He was acquired through a trade with Detroit for Kyle Lobstein, and hit well on his way up through the minors before and after. Both players made major league debuts last season, and both players may or may not have what it takes to jump from Triple-A to MLB play.

So it's less of a question of whether the Rays sign one more receiver, and more of how good that catcher needs to be. Should he be the primary starter ahead of Rivera? Slot as Rivera's back up? Or maybe be the first one called out of Durham?

I don't believe the Rays are in the business of finding another catcher through trade (required disclaimer: anything is possible), so my interest is firmly held be free agency, and I have a name in mind for each of the situations listed above: a primary catcher who could play in front of Rivera, a secondary catcher who could play behind Rivera, or a possible minor league signee.

Over at Dock of the Rays, Jason gives us a full scope of the market for catchers to satisfy all three questions, and I'm fascinated to see if he named the guys I've had in mind. In full disclosure, I sent these names to Ian and Jason before the latter finished his analysis, and I'll list them at the bottom.

Back to Jason's analysis:

He begins with Rene Rivera, diving into his offense, his defense, his arm, and his framing ability, then uses a z-score analysis to score catchers league wide in the categories, ranking Rivera at 13th overall among catchers still active in 2014, using career-long data. 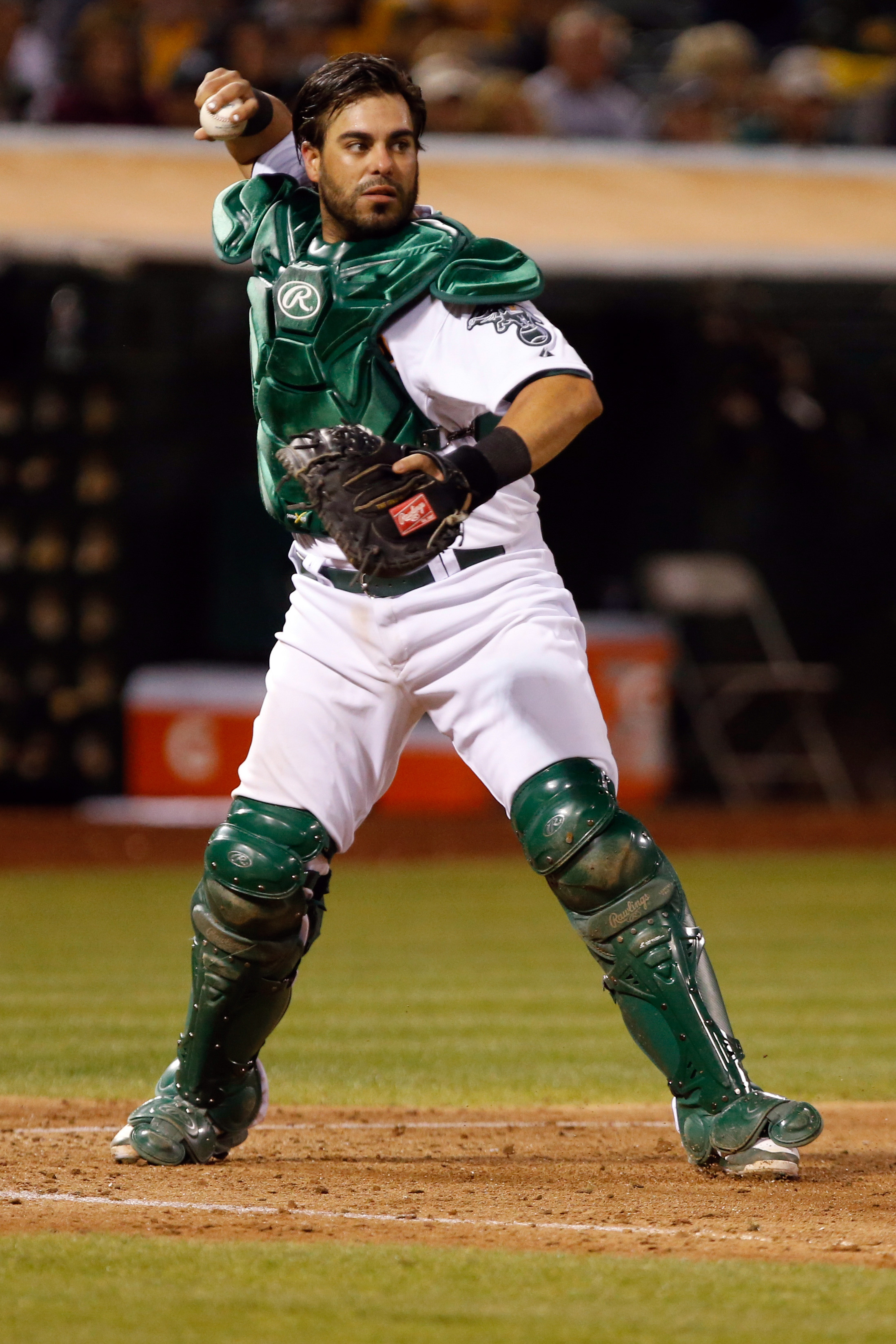 That's career data, so it needs a dose of skepticism. We know the Rays are probably not in the market for Pierzynski, given his terrible level of play over the past few years; however, it does bring other names to the forefront.

I'll highlight a couple gems here, but you should go read Jason's full write up. Then I'll respond below with where they would fit on the Rays roster in 2015.

Kratz is projected to be a slightly worse hitter than Rivera with smaller platoon splits. He makes up for it with the glove as he's above average throwing guys out and he's well above average in both framing and blocking. Salvador Perez doesn't take many days off so maybe they feel Kratz is redundant or that the third option, Francisco Pena is ready for more than 34 days this year. Either way this could be an opportunity for some arbitrage.

Geo Soto is a guy that I've been trumpeting for a while because he's probably the best option left in free agency, which isn't saying much. The upside is that he would not require prospects. The downside is that he's not especially good. The bat is similar to Kratz and Rivera, but the arm isn't as good, and the framing is more good than great. On the right deal (read: cheeeeeap) I think he makes a ton of sense. If he'd go for something like Hanigan's 2/8ish deal then maybe you get a guy that won't kill you because it's only money.

Dioner Navarro would represent the best overall bat in this group. He profiles above his peers against both types of pitchers with quite a bit of success against lefties. The issues come on the other side of the plate. He's league average at gunning runners, but well below in the other aspects, especially framing. If you're willing to roll the dice that Rivera can play 100+ games then maybe you live with it and let him DH against lefties for DeJesus, but that doesn't really seem like the Rays Way (TM) of doing things.

Andrew Susac is one of the best prospects in the game and unlike the other rookies found at the bottom of the table above he actually has some sample of performance. Steamer and the Matchup Tool really like him at the plate and in hiss very brief exposure he looked like a good arm, good framer, with some trouble on balls in the dirt. If he's ready to play now the Giants might see it as a chance to rest Posey at another position some more or maybe there's a chance they look to acquire a guy like Ben Zobrist for the rookie that's mostly blocked. If I'm the Rays I take that in a heartbeat, which means it's probably not a square deal.

These are all potentially great options for the Rays, if they really need one more. Jason covers many more in his analysis, so go take a look. The rest of this will still be here when you get back.

Up next I'll provide some thoughts on the guys I think the Rays should target.

As mentioned above, prior to Jason's analysis I put together a top target on the free agent catching market, given a perceived need for the roster. Here's the names I came up with, and how they compare to Jason's write up.

Soto popped up immediately in Jason's write up, and has been a clear favorite among catchers available on the market. If the Rays don't have a ton of confidence in Rivera to be the starting guy, I think they could lean on Soto to take up the mantle. That doesn't mean I think they should.

He was re-signed to Texas last season at $3 million, suffered knee and groin injuries, then was shipped to the A's for cash considerations. His bat isn't world beating, but he can be league average. If you call 2014 a lost season, he can walk pretty well, with four seasons since 2005 with a walk rate above 10%, and as recently as 2013.

Using the catcher metrics on Baseball Prospectus, Soto ranked 23rd among catchers in framing, totaling 5.1 framing runs with his receiving. Over on Stat Corner there isn't as much love, they did not like his 2014 season, but Soto has a glove that has at least displayed a tendency to be above average in framing, nearing five runs per season up to 2012 on their metrics.

Whether you are high or low on Soto's framing, it's not a skill that we've seen age with time. There's some potential that could come back into focus. If the Rays brought him with a chance to split time with Rivera evenly, I think they could get some value from an experienced catcher at a potentially low cost.

Jason is likewise high on Soto as a Rays option behind the dish, but I'll agree that the cost would need to be low for the Rays to bite. If anything the team isn't done cutting salary, so it's hard to envision them adding at this point.

Here's a name many have written off entirely, and his career has not shown well, as seen in Jason's score of 56 among active catchers. Why am I targeting him?

He still scores positive on Baseball Prospectus as well, who awarded him 3.2 runs with the glove in 2013, and 1.3 runs in 2014 in limited playing time - just 22 games behind the dish for Texas, who were also using him at first base.

He's not what the Rays are looking for in a starter, but in a back up to Rivera it's not foregone, particularly if he can be had for something in the $1 million range.

The former first round draft pick is still riding out his rookie status, despite his free agency. So like the contract with Ernesto Frieri, the Rays could sign Arencibia for 2015 and maintain control if they'd like to keep him for 2016 at a low cost. The bat projects poorly, though, so it's possible he could be had for a minor league deal, which is all the better.

This former Phillies back up has an even worse bat than Arencibia, with a non-existant walk rate (0.8% in 2014), and a .271 wOBA despite a .341 BAbip. It's laughable. It also screams minor league deal, and could be some nice insurance if Casali is the guy to roll with and/or nothing else pans out.

Baseball Prospectus awarded Nieves 3.6 framing runs in 2014 (good for 26th in baseball), and 1.4 the year before that. Stat Corner grades him exactly average in his receiving. You could do worse with a minor league depth option, so it's a real possibility.

With both Arencibia and Nieves, they were after thoughts in Jason's analysis, but on minor league deals I think they could be good gets. The former might even have a chance at making the roster if the Rays like what he offers enough in Spring Training.

Who did I miss?

I'm pretty comfortable with these targets among the free agents, so Jason was right to hone in on trade candidates, and among them Erik Kratz is clearly a contender.

Acquired from the Blue Jays mid-season by the Royals, 34-year old Kratz is still cost controlled through 2018, having not cracked the bigs until his age-30 season in 2010, and maintaining rookie status until 2012.

Kratz was a secondary piece in the swap of Danny Valencia and Liam Hendriks last July. Accordingly, he shouldn't cost more than a replacement-level player that the Royals might need as depth.

As noted by MLB Trade Rumors when he was acquired by Kansas City:

Kratz is a career .268/.342/.474 hitter in 1618 Triple-A plate appearances. He has consistently rated as a strong pitch-framer and pitch-blocker, and he's gunned down 32 percent of attempted base stealers in his big league career.

Minor league batting lines don't mean much for the majors, but Steamer at least projects Kratz to an 88 wRC+ next season, which is better than any of the three names I mentioned above, including Soto.

If Kratz can be had, he too would be a good get.

That's a lot of words about a lot of not-so-great catchers, but let us know your thoughts. Do the Rays need another guy in front of Casali? Behind him? Erik Kratz has a real possibility to be a very nice acquisition for the Rays, but at what cost?