Understanding the Approach of Rays Hitters

Share All sharing options for: Understanding the Approach of Rays Hitters

How well did you do with Ian's test on Monday? How well do you feel like you know the Rays hitters?

One of the draws for watching baseball is knowing the tendencies of your pitchers and hitters, and then seeing how they respond to their opponent. Or how their opponent responds to them. The deeper you go, the more interesting it becomes. Let's go down the rabbit hole.

The player cards at Brooks Baseball give a fantastic description for hitters at the plate, but the details can be deceiving. Here's an example of Ben Zobrist's profile:

Fastballs include Fourseam, Sinker, and Cutter. Breaking balls include Slider, Knuckle, and any kind of Curve. Off-speed pitches include the Change up, Splitter, and Screwball.

The majority of Rays hitters have a consistent approach to their hitting game: a steady approach toward fastballs -- not aggressive, but not gun shy either -- and are relatively patient toward everything else.

However, having a homogeneous approach does not guarantee that player is choosing to swing wisely. For instance: in 2013, Zobrist might have had a very patient approach toward braking pitches and off-speed pitches, but he did not swing at them in the same way.

But even that selectivity does not guarantee Zobrist did well with those pitches. Against the breaking ball, Zorilla swung and missed an average amount (27%), but against off-speed pitches he whiffed a below average amount (22%). With the breaking ball, pitchers used the entire zone, but with off-speed stuff pitchers left holes in his zone and did not try to expand his swing.

Going back one step, Zobrist would bat 21% of breaking balls for a line drive and 21% for a flyball during the season. Against off-speed, 23% went for line drives and 20% for a flyball. Balls in play seem to garner the same result. Having received all this information, which kind of pitch do you think Zobrist struggled against?

Zobrist finished the season with a .246 batting average against the breaking ball with a 6.9% walk rate, and .291 average against off-speed pitches with a 9.8% walk rate. And yet his approach is to be very patient toward both.

Pitchers only used off-speed 20% of the time against Zobrist last season, but primarily fed him breaking balls only when they were ahead in the count. Meanwhile, Zobrist saw fastballs 57% of the time. We're dealing with a little less than half his game.

So what does approach really tell us? How does it inform our understanding of watching Zobrist at the plate?

Approach is not just how often you swing either. It's about knowing when not to swing. When you do swing, you have to get great results.

Zobrist had the second lowest Swing% on the Rays last season at 40%, just behind David DeJesus, who might be the most patient hitter on the team. Other players with that kind of selectivity include Mike Trout, Matt Carpenter, Joey Votto, and Buster Posey. There's something to be said about not swinging the bat.

Then again, patience may be a virtue, but you can also have too much of a good thing. Patience needs to be supplemented by an ability to swing and not miss -- or at least a tendency to not chase the ball.

So as you peruse Brooks Baseball, remember, approach will tell you the player's strategy at the plate. It will not indicate success with that strategy. 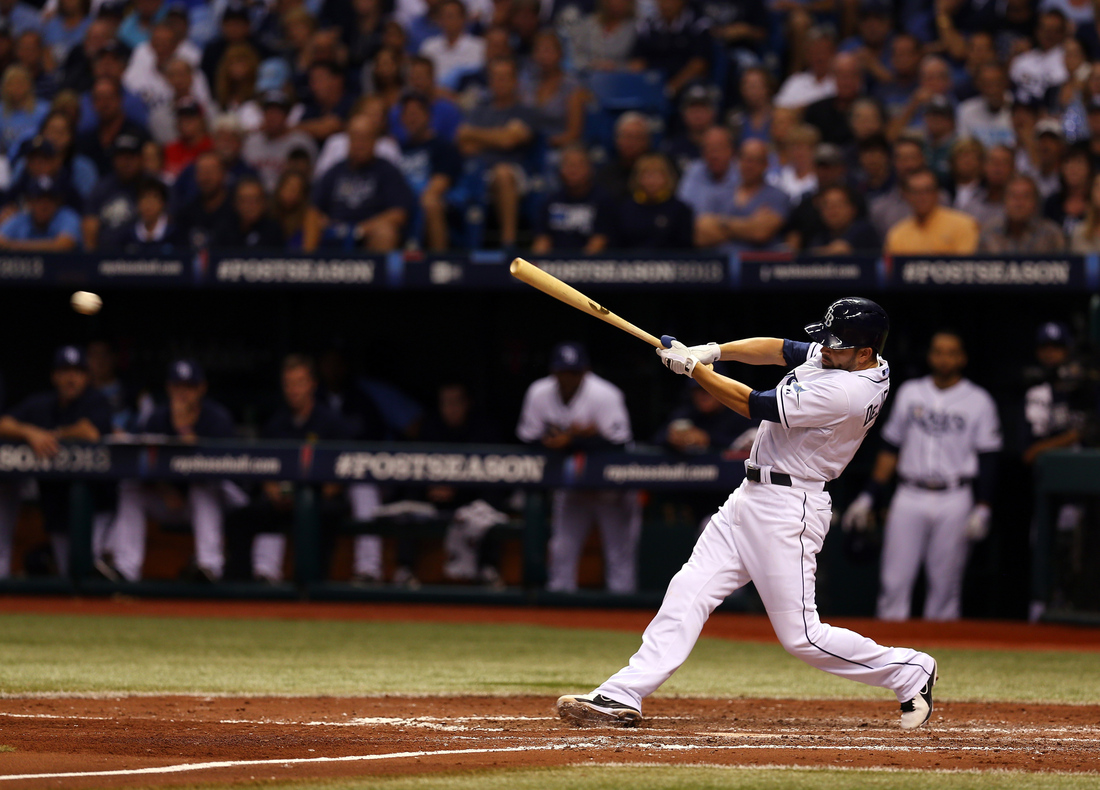 Before we launch into our preview series for the 2014 season, I thought it might be helpful to discuss which players deviate from the standard Rays hitter mentioned above.

Within the last few months the Rays have acquired and then signed to an extension two very patient hitters in their 30's. Both players have a career Swing% of ~40%, make contact on pitches in the zone ~95% of the time, and yet are marked as having a "league average" eye on Brooks, a rating based on ratios.

Another two players recently acquired, but with a different profile. Both of these players seem to have a steady approach at the plate, regardless of pitch category, and a league average likelihood to swing and miss as well. By comparison to other Rays hitters, whiff rates in the 30%'s when facing non-fastballs might seem ghastly, but it's in line with the majority of players.

Myers did show an above average likelihood to whiff on breaking balls (just so, at 37%), which meets the stereotype of a young hitter, but it wasn't out of line with expectations. In his half season of play, Myers was a little trigger happy against the fastball, chasing out of the zone 31%, but otherwise exhibited a good eye against the breaking ball and off-speed pitches.

Forsythe was even more limited in his appearances last season, and showed a league average profile in most every regard.

The only Rays hitter to register as aggressive in every category was Molina. He has a league average eye against each pitch type, in terms of in or out of zone, but very different tendencies to swing and miss. He's league average on fastballs for whiffs, and remarkably poor against braking balls (40% whiff), but reads off-speed well (25% whiff). All in all, he's after most of what's offered, and makes his contact at respectable rates. It's just not your standard player for Tampa Bay.

Escobar is only truly aggressive toward fastballs, and he has a below average likelihood to swing and miss on the pitch, so his approach has suited him well. He held a .286 batting average with a 10.9% walk rate against hard stuff last season, and that was a down year for him against the pitch type. Against the breaking ball, however, Yunel looks like David DeJesus. And against off-speed stuff, he looks more like Forsythe.

When you're watching Escobar, he'll be aggressive on the fastball, very patient on the breaking ball, and steady against off-speed. That's Yunel playing to his strengths in performance against each pitch type, which is not something we're use to seeing, but it's not unreasonable either.

Watching the game and knowing a player's approach can provide context to how each player might respond to the pitches he faces, and if anything, enhance your viewing experience.