Know your Rays: swinging at the fastball (Thursday)

Share All sharing options for: Know your Rays: swinging at the fastball (Thursday)

Here are the answers to the previous three days.

It's sort of interesting that he seems to like to attack the ball in on his hands more from the right side.

Tuesday: This player covers the zone pretty normally against lefties, with a slight preference for the high heat. He does a decent job letting fastballs below the zone against lefties go. Against righties, he shows a strong preference for the pitch in on his hands, and he lays off fastballs down and away. He is a righty, so that's likely a healthy respect for the threat of the breaking ball down and away (and anyway, same-handed breaking balls down and away are tough to hit, even without the possibility of it actually being a slider off the outside)

Wednesday: This player's heat map looks pretty dang similar to Longoria's. Unsurprisingly, he is also a righty. Also, unsurprisingly, his results are not quite as good as Longo's (few hitters' results are). Over his career, he's been .43 runs above average per 100 FF/FA, and exactly average against FT. This player is Desmond Jennings.

And here's the tally for the week so far:

In the lead with two: Andy Hellicksonstine (not surprising, since he's just finished up a series examining all the Rays' batters' tendencies, at Dock of the Rays) and LoL@MyLackOfSportsKnowledge (surprising, because of his name). 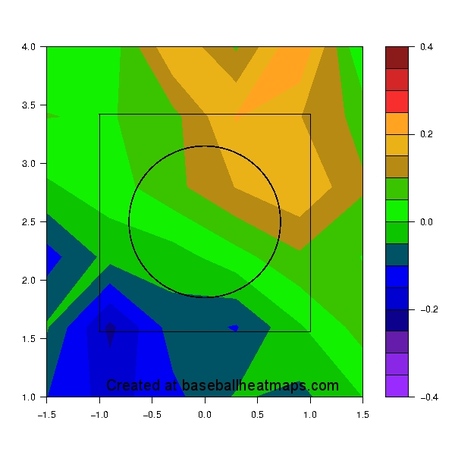 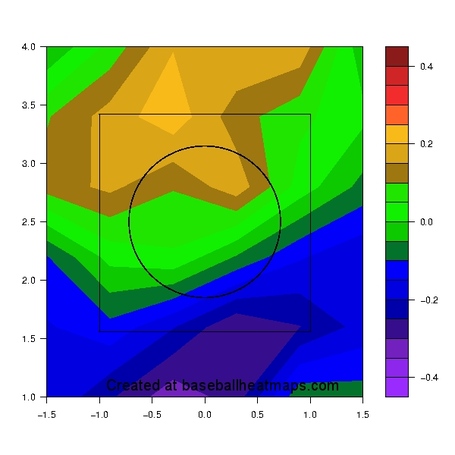