Know your Rays: swinging at the fastball (Saturday)

Share All sharing options for: Know your Rays: swinging at the fastball (Saturday)

Friday: All of the players we've seen previously follow the same pattern. They'd rather swing at elevated fastballs than ones low in or below the zone, and against same-handed pitching, they're aggressive up and in and passive down and away (Zobrist doesn't show this part of the pattern because he's a switch hitter). And with the exception of Zobrist, they all hit the ball pretty hard, but also strike out pretty often. Yesterday's player is different.

This Ray, a lefty, actually lays off the fastball up and in on his hands, and offers at it at an above average rate down and away, both in and out of the zone. I believe this is what's called "protecting the plate." Against opposite-handed pitchers, he also guards the outside of the plate, and unlike our previous examples, he wants nothing to do with the fastball up above the zone (this is probably why he's a ground ball and line drive hitter).

There's one interesting situation where this Ray does resemble our previous examples, though. They all had a "take spot" in a location where, if they had misidentified the pitch and it was a breaking ball instead of a fastball, it would have been out of the zone. This Ray has a similar "take spot" down and in on against righties. That's the location where a breaker would be in on his back foot, and -- like the same-handed curve down and away -- it's a common way that pitchers attack hitters. This Ray is James Loney.

Loney's more defensive approach doesn't work as well against the fastball as our previous examples. From FanGraphs, he's been slightly above average against four-seamers, and slightly below avearge against two-seamers. Do note, however, that Loney has been only a slightly above average hitter throughout his career overall, so his average-ish fastball results should be expected. Also, he hasn't fared about the same against all of the common pitch types, so his approach may be well-optimized for his abilities.

Correct answers: TBRaysfan009, don't let Andy get you down, you had this one right! Brickhaus had this right as well. 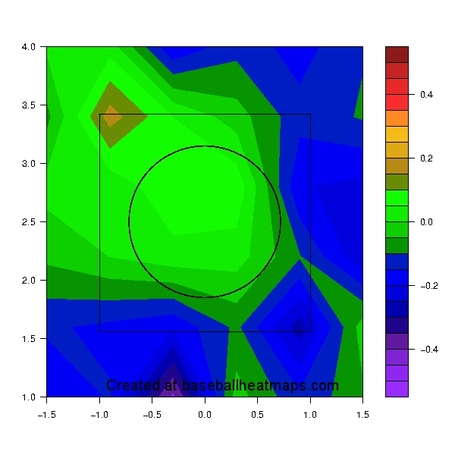 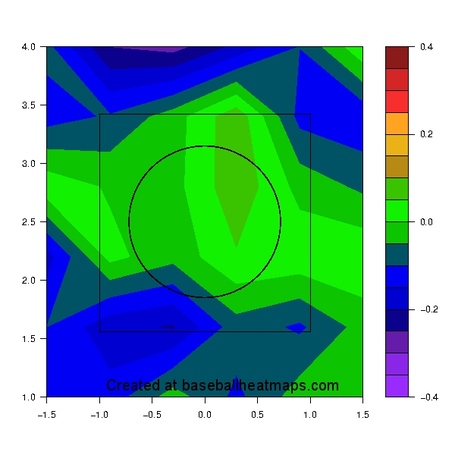 Who is this mystery Ray?