Know your Rays: swinging at the fastball (Sunday)

Share All sharing options for: Know your Rays: swinging at the fastball (Sunday)

SATURDAY: Two days ago we saw Loney, our first batter who makes his hay by not striking out. You can probably tell that yesterday's mystery Ray doesn't strike out a ton, either. I bet you had trouble figuring out his handedness, though (if I were playing the game, and if he were still on the team, I would have guessed Jose Lobaton). Against pitchers of each handedness, this player swings at pitches inside the zone at an average rate, and at pitches almost anywhere outside the zone less often than the league average.

So I'll tell you. This batter is a righty. That hot zone in the top graph is just a little bit of aggression on easy-to-hit, opposite-handed fastballs up by his hands. And rather than take pitches that could be breaking balls out of the zone, he trusts his swing, and protects the edges of the zone where breaking balls might come. Yesterday's mystery Ray is Yunel Escobar.

Like Loney before him, the run-value stats say that Escobar has been slightly above average against four-seam fastballs, and slightly below average against two-seam fastballs. Also like Loney, he's been about the same against all common pitch-counts. Here's the pattern I think we're seeing: players with potent swings (Longoria, Jennings, Joyce) all look for pitches they can drive, and take the rest. Players with less potent swings (Loney and Escobar) rely instead on their understanding of and ability to cover the whole strike zone. Now there's of course some question of which comes first. Did Loney adopt his approach because he can't often drive the ball deep, or does he not often drive the ball deep because of his approach? Can a player change? Not usually, but Ben Zobrist did.

Still, what can seem odd in a first-baseman is to be admired in a gold-glove caliber shortstop.

And here's the tally for the week so far: 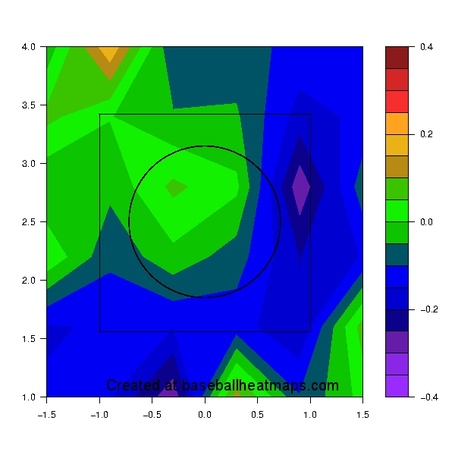 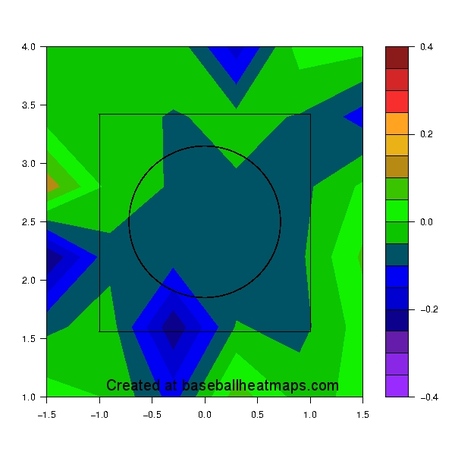