Who owns the best pitch on the Rays staff?

The title says it all. Which pitcher has the best pitch on the Rays staff?

Share All sharing options for: Who owns the best pitch on the Rays staff?

The question of course is quite subjective. Sure, there are pitch statistics that can be measured: whiff rates, chase rate, contact rates, movement, and batted ball production among others. These numbers surely help in evaluating how good a pitch is. But, pitches happen to exist in the context of repertoires. On a per pitch basis, R.A. Dickey has a better fastball than David Price.

That being said, here's a look at the best pitches on the Rays staff. Feel free to disagree. Surely, I've slighted some Rays hurler.

Price's cutter certainly belongs in the discussion. He started throwing the pitch in 2011 or 2012 depending on whether you consult Brooks Baseball or Fangraphs. In any case, he featured it more than 10 percent of the time for the first time in 2012, the year he won the CY Young award. When batters put the cutter in play, it resulted in a ground ball at a 59.6 percent rate. They fared a little better in 2013, but on balance it's his best secondary pitch. That might change in 2014, as he's learning to lean on his changeup more often.

Alex Cobb's split-change. Fangraphs labels it a changeup, Brooks Baseball calls it a splitter. Cobb appears to call it a splitter, and the velocity of the pitch is more like a splitter than a changeup. Whatever it is, it's nasty. Batters have chased it more than half the time when Cobb throws it out of the zone, and they whiff on about 45 percent of those swings. Overall, the pitch has a 16.5 percent swinging strike rate, and when hitters do make contact, they have a 63.9 percent groundball rate against the splitter. His knuckle curve isn't too bad either.

Beyond the Box Score: Alex Cobb has next

Beyond the Box Score: Alex Cobb has next Chris Moran: Is Alex Cobb the Rays ace?

Jake McGee has a fastball, and that's pretty much it. Fortunately for him, it's upper 90's heat with a whiff rate approximately twice the major league average. Nobody threw their fastball more frequently than McGee in 2013, and only six other pitchers could top his 96.3 average velocity. In the last two seasons, he has a strikeout rate of 31.4 percent, one of the highest marks in the game. Because he relies almost exclusively on his fastball, he hasn't demonstrated a platoon split. Unlike most left-handed relievers, he's faced more right-handed hitters, including a very big at bat against lefty masher Ryan Raburn in the Wild Card game.

Matt Moore has struggled with his control, but hitters have struggled even more with his curve. You might even say they have trouble with the curve. It's 12.5 percent swinging strike rate is high for a curve, which most hitters don't make an offer at. In terms of whiff per swing, hitters come up empty over 30 percent of the time. It's not Clayton Kershaw level, but hitters have a mere .052 ISO against the pitch, with a 58.3 percent ground ball rate. Moore's changeup is pretty good too, though he believes his elbow doesn't agree with it. Now if his elbow can hold up and he throws more strikes, he'll actually deserve CY Young votes this year. 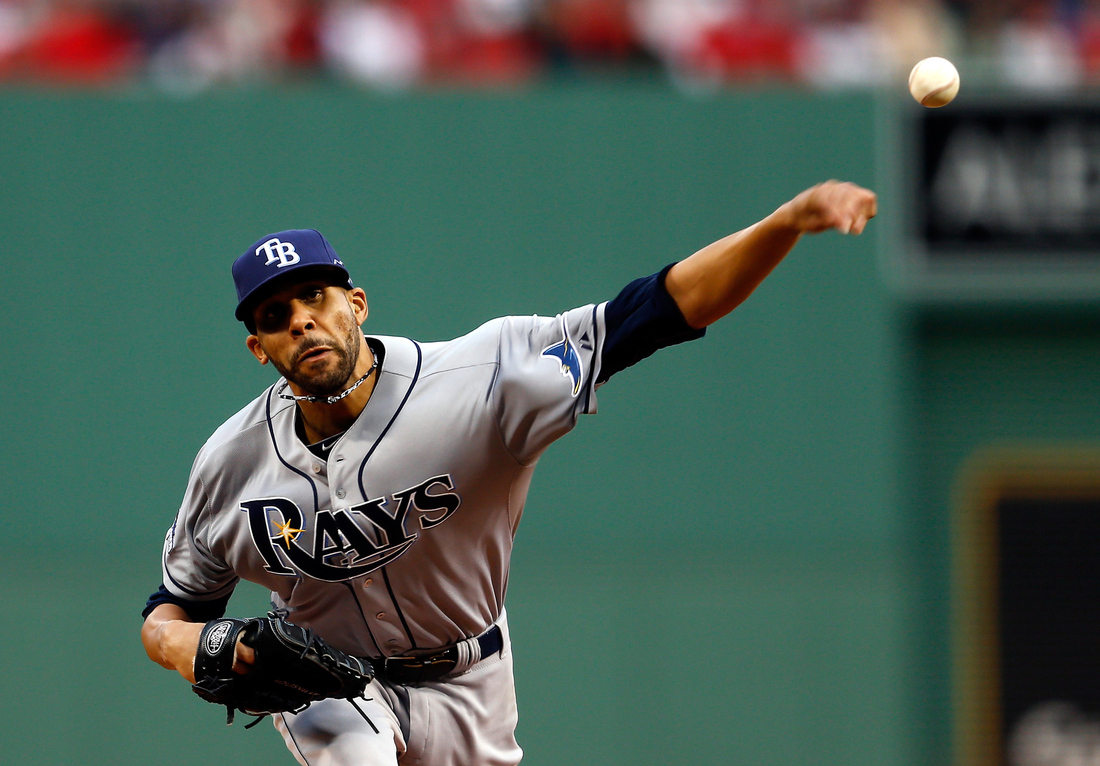 Jeremy Hellickson saw his streak of luck or uncanny skill or some combination of the two end in 2013, as his ERA shot to 5.22 despite improvement in his strikeout and walk rates. He left his changeup up in the zone more frequently, and hitters subsequently did more damage when they made contact. Still, it was often a nasty pitch, as shown by its 21.3 percent swinging strike rate. For his career, he's thrown the pitch for a strike 68 percent of the time, compared to 60 percent for all his other pitches. Unlike most pitchers, Hellickson throws his changeup as frequently to right-handed hitters as to lefties.

Chris Archer's slider has confounded hitters to the tune of a 14.7 percent swinging strike rate. Opposing hitters have chased the pitch over 40 percent of the time when Archer throws it outside of the zone. Also, it has a ground ball rate over 50 percent. Like Hellickson, Archer has thrown more strikes with his best secondary pitch than his fastball. His slider has a 70 percent strike rate, compared to 64 percent for his other pitches. Archer's heavy reliance on the pitch represents something of a health concern going forward, and it's not as effective when thrown to left-handed hitters, against which he has a 4.93 FIP, compared to 2.83 against righties.

I'm a sucker for a good splitter, and I'm very high on Cobb, so I'll say his split/change is the best pitch on the Rays staff.

Even after the departure of James Shields, the Rays staff threw the most changeups in baseball by a wide margin in 2014. Maybe Archer will figure out a changeup this year. That would be cool.