Share All sharing options for: Season Preview 2014: Jake McGee and the curveball

Rays southpaw Jake McGee is the oldest home-grown talent on the roster, a former fifth round draft pick from 2004. This will mark his tenth year of professional baseball, including rookie ball from the season he was drafted.

McGee has a storied history climbing the Rays ranks, including being listed in the Rays' Top-10 for five seasons between 2006-10, and reaching No. 15 as a starting prospect on BA's Top 100. His initial draft report from Baseball America described him as "slender" and notes that his fastball sat between 88-91 as a seventeen year old.

Things change, a blown elbow in 2008 leads to Tommy John and a new career path, and today McGee is known for being a large man with a lively fastball that can touch 99 mph, but one without a true secondary offering -- other than a slider that neither he nor his fans trust.

Movement is a strength with McGee's fastball, thanks to high velocity and excellent break. By contrast, the movement on his slider feels like it plays is in slow motion, allowing batters to easily read the pitch.

The slider can be effectively used on the outskirts of the strikezone, but it's a meatball when served over the plate.

At the time of his drafting in 2004, McGee's best attributes were his clean delivery and a sharp curveball with tight spin. As McGee filled out his frame, the curveball took on a slurvy nature and transformed into the slider he pairs with the fastball today. This is a common transition for prospects to make with the breaking ball, particularly when the curve won't bite, but that was never McGee's problem.

The trouble was that the spiked curve became a power curve due to his added velocity. After Tommy John, McGee seemed to dabble with both the slider and curve en route to the majors, but this may not have been an oscillation between two breaking balls. It may have simply been the same pitch with a stiffer wrist and added velocity.

Last season he used the pitch a mere 75 times over nearly 1,200 pitches, focused against 18 batters. In other words, McGee preferred to use his fastball 93.2% of the time. The slider is seldom used, while selectively used, and has not been very effective. So this off-season McGee is bringing the curve back into his arsenal, and might even flash a change up now and then. The former will be more important than the latter. 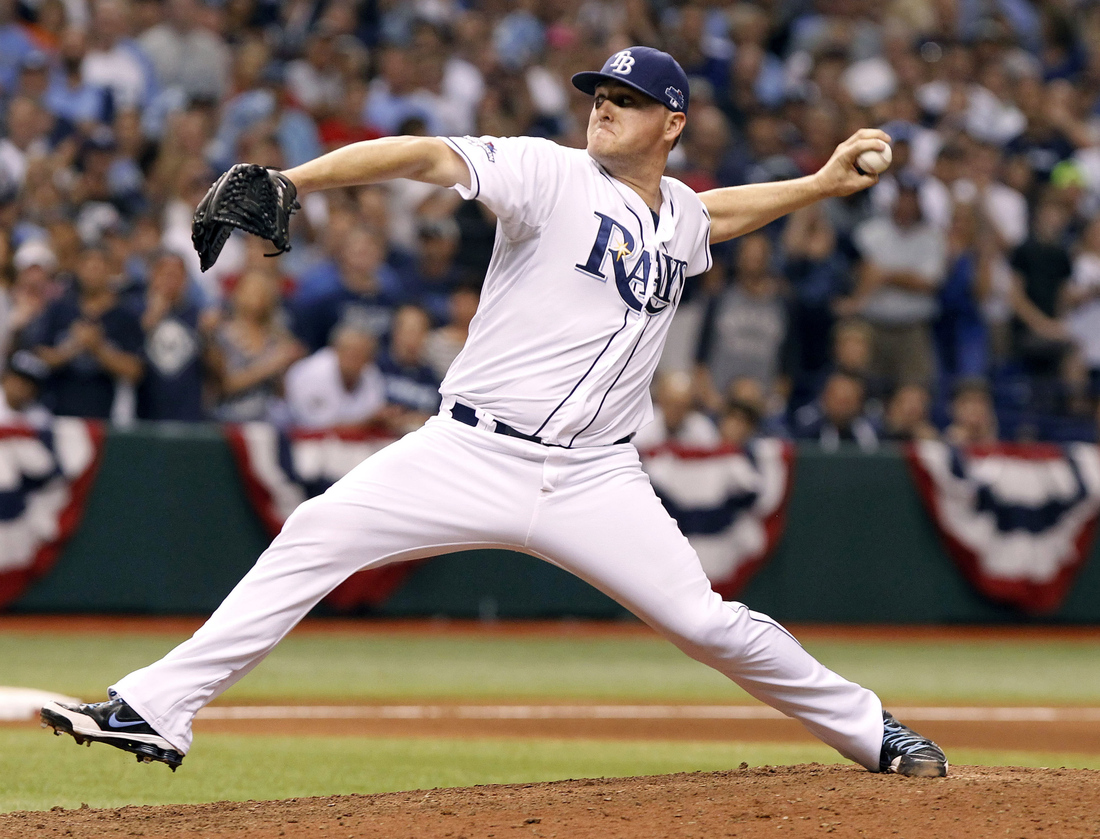 It's the curve McGee hopes gives the contrasting movement and the serious speed differential that provides success in a secondary offering. After depending on the curve for so many years as a starter, McGee expressed confidence in his ability to bring it back.

McGee told reporters that the curveball has given him "huge confidence", and spoke candidly with Rays PR after a live batting practice, who passed along their quotes:

"It's going really well. It's doing a little better than I thought at first. I started throwing the curveball and it's been doing really well, both the first time and today. ... I've faced maybe two or three righthanders total in both BPs, and they've said it's good every time. [I'm] throwing it for strikes, and in and out of the zone."

McGee noted that the transition back to the curve has been easier than he could have expected, but is pleased that he's gained a feel for the pitch after a three year hiatus. Even still, it will be a work in progress until the Spring is up:

"It's real encouraging to get it into games... I'd say by the middle of spring and towards the end of spring I'll probably get 10, 11 outings. By the end of that I'll have a good judge how I should use it and how it's working well and how it performs against hitters."

One of the advantages of the curve are what McGee noted as a two-point break.

The most exciting aspect to McGee's fastball arsenal are his spin rates, which according to MLBAM's data average better than 2,700 RPM (his fastballs classified as two-seamers average above 3,000 RPM). The high spin rates fool the batter both by making the ball run and by working against gravity. The higher the rate of spin, the slower the sink.

Meanwhile, McGee's slider tumbled at below half that rate of spin, but at a very similar angle (and 10 mph slower). A well-thrown slider, like Chris Archer's, will have dramatically less spin than a fastball, but that spin comes at a different angle.

Essentially, McGee's fastball is a cutter without the necessary velocity to make it play off of his regular fastball. It's the type of fastball you would expect from a knuckleball pitcher. It's easy to identify, and easy to hit.

McGee's slider has essentially allowed batters to treat the pitch like a poorly thrown fastball, in movement and approach, which is why the curve is so important.

McGee's curve is advertised as 12-6 with a hard break and ample spin -- meaning plenty of gyration with serious top-spin, the true foil of a fastball and a proper contrast for opposite handed hitters.

We will have to wait and see what kind of movement, break, and spin accompany the return of the curve until the pitch is sorted out at the end of Spring, but this will be one of my favorite stories to follow.

You can listen to more commentary on the pitch from McGee via Rays Radio:

For more about spin rates, which are predictable for fastballs and a pain in the neck for breaking balls, view Alan Nathan's research.