The once (and future?) strikeout king.

There was a time, not so very long ago, when the Rays were not a good baseball team. They played badly, and they lost a lot of games. There was very little to look forward to, and Rays fans were forced to find their enjoyment in odd places (I know of an otherwise respectable fellow who developed an unhealthy fascination with a 50 mph eephus). There was, though, a young lefty on those bad old Rays who was a legitimate source of pride. In 2007, he pitched over 200 innings and struck out 26% of the batters he faced. About once a week, we watched Scott Kazmir pitch, collected our free pizza, and were happy.

I wanted a superlative. I wanted to say that Scott Kazmir was the best strikeout pitcher in baseball. The only problem? He wasn't. That same year, Erik Bedard struck out 30% of the batters he faced. The following offseason Bedard was traded from Baltimore to Seattle for Adam Jones, Chris Tillman, George Sherrill, Kam Mickolio, and Tony Butler. He promptly hurt his shoulder, and never once pitched even 100 innings in a season for the team that bet their future on him being an ace.

There would be something elegant in getting the guy that long ago beat Kaz for the strikeout title, but the truth is that we're not getting that guy.

Now 35, Erik Bedard (with the help of many surgeons) seems to have overcome the shoulder problems that robbed him of his prime -- including the entire 2010 season -- but he's changed along the way.  His comeback campaign of 2011 was surprisingly effective (3.56 xFIP), but the two succeeding years were more in line with what you'd expect from a back-of-the-rotation starter (xFIPs of 4.05 and 4.61).

To understand what Bedard is now, you need to first know what he used to be.

He was the guy that I thought typified within our division, and it's why he's so good, because he was able to throw something other than a fastball in a fastball count for a strike. He was uncanny at that. That's why I thought he really ruled when he was with Baltimore. - Joe Maddon

There's only partial PITCHf/x data from 2007, but combined with the data from his partial seasons in 2008 and 2009, it's enough to get a sense of how Bedard worked. I'm using Brooks Baseball data because their classifications are much more consistent from year-to-year than the MLBAM algorithm (which has been changed and improved over time).

It was very simple, and Maddon had it right. Bedard really only threw two pitches (three if you separate two- and four-seam fastballs) -- a fastball and a curve -- but he still managed to surprise.

In Bedard's glory days, he was truly unpredictable against righties, throwing any of his three main pitches* at about the same rate, no matter the count. Against lefties, there was a little bit more of a pattern. Bedard would lean more on his two-seam fastball when he was ahead, and more on his curve when he was behind. That's strange, because usually a breaking ball is the ideal weapon to put away same-handed batters.**

*Bedard's two-seam fastball doesn't really act like a sinker. It's just as fast (slightly faster in most years) as his four-seam, and while it has slightly less rise, it has plenty more run. Think of it more as his "real good fastball." It's what he finds when he reaches back for that little extra to put a batter away.

**Note that throughout his career, Bedard has posted a reverse split, so his approach against RHB actually works better.

Pitching is tough though, and after missing the entire 2010 season to injury, Bedard, now 32, had lost something off his fastball. 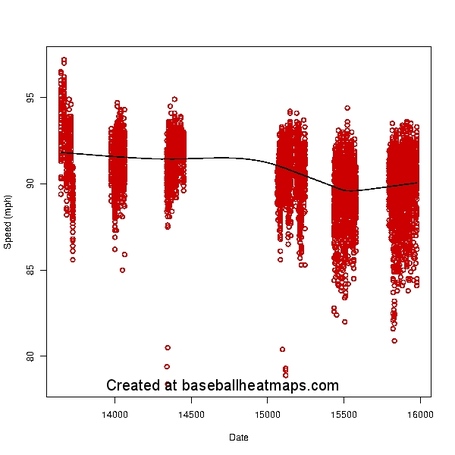 No one wants to go away from how they've found success, but I imagine Bedard decided he could no longer work as a two-and-a-half trick pony. He diversified.

Now Bedard has toned down his fastball/curveball a bit, in favor of throwing a bunch of pasta at the wall, and for one year it stuck.  In 2011, Bedard posted a 3.62 ERA with a 3.56 xFIP, but since then, his walks have risen while his strikeouts have stayed the same (an interesting note, though, is that in these years of his decline he's posted normal lefty splits).

It's tempting to compare Bedard to Roberto Hernandez, a recognizable name who's a reclamation project with designs on the number five starter slot, but I think that would misrepresent Bedard.

Hernandez was a pitcher with strange but high-quality stuff, who didn't quite know how to make his equation work. The Rays recognized his superior but underused changeup, and with a small tweak in approach, made him a better pitcher. This year, he signed a $4.5 million contract with Philly.

That will not happen with Bedard. I don't believe there's a hidden well of untapped potential. The better comparison is to reliever Joel Peralta. Bedard has maximized his potential already, and it's just a question of how much he can hang on to, and for how long.

This is what decline looks like, plain and simple. The pitcher doesn't throw as hard as he used to, so to get batters out, he mixes up his pitches and hugs the edges of the zone. He may succeed for awhile, but he can't always hit his spots, so he loses batters that he used to put away and the walk numbers rise. Bedard and Peralta both can make it work for a time -- and if you need to pick up strikes on the edge of the zone, you could do a lot worse than to throw to Ryan Hanigan and Jose Molina -- but all runs come to an end, and theirs will end soon.

If Erik Bedard wins the fifth-starter spot there will be times when we'll remember 2007, and the gullible among us (including myself) will believe. There will be other times when Bedard fails, and his struggles will be hard to watch. The Rays are in a very different position now than they were seven years ago. They don't need a Messiah; they just need someone competent enough to eat a few innings once every five games and give the rest of the team a chance to win. I'm not sure if that's Erik Bedard, Jake Odorizzi, or someone else, but I do know this: Every Bedard strikeout will bring back fond memories of the bad times when we believed in another lefty with a live fastball.