Diving into the mystery of Nate Karns.

Who is Nate Karns?

Not too many people in the Tampa Bay area know, I would assume. Karns, a 6-foot-3, 230-pound RHP from Texas, is one of the newest members of the Tampa Bay Rays after being acquired in the trade that sent Jose Lobaton, OF Drew Vettleson and LHP Felipe Rivero to the Washington Nationals just two weeks ago.

Because of a torn labrum, Karns didn't begin his professional career until the 2011 season in the Nationals farm system, but he rose quickly in their minor league ranks. He never touched the AAA level and accumulated record of 24-12, a 2.66 ERA and 10.7 K/9 over the course of two full years in the Minors. Karns was named the team's minor league Pitcher of the Year in 2012 and impressed in big league camp during Spring Training last year.

Thanks to an injury to RHP Ross Detwiler, Karns made his MLB debut on May 28 against the Baltimore Orioles, then went on to make two more additional starts. He posted less than stellar numbers throughout his three MLB appearances -- 12.0 IP, 7.50 ERA -- and he gave up five home runs. By comparison, his minor league 2012 HR/9 was 0.16 in A-ball, and 0.95 last season in Double-A.

It wasn't a bright start to his MLB career, perhaps he was rushed. Either way, that certainly isn't indicative of his potential for the big leagues.

Karns seems to have the appropriate mindset in his approach to pitching as evidenced by his statements in an interview with The Washington Times following his second major league start.

Karns relies heavily on two pitches: fastball and curveball. As mentioned above, Karns showed potentially dominating stuff by posting a 29.2% strikeout rate during his three years in the minors.

His fastball can touch 96 MPH, but his command of it needs work. Major league hitters can take advantage any fastball if it's elevated and over the plate. All five of the home runs he gave up in his three MLB starts came on a fastball.

Example A | Example B

On the other hand, when his control is at its best, he can use the good velocity and action on his fastball to ring up strikeouts. Combine that with a devastating overhand curve, and the 1-2 punch these pitches will be his calling card as he progresses throughout his major league career.

Shortly after the trade was announced, Ian broke down Karns' curveball a little more in-depth. In the comparison to other Rays' pitchers, Karns' curveball doesn't move as much as some of the staff's best, but it should make up for that with unusually high velocity: 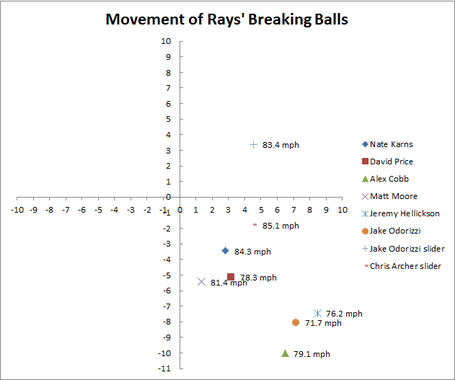 His arm is both loose and powerful, with a surprisingly repeatable delivery; however, a stiff front side and a lot of action in the lower half of his body -- particularly after the pitch with how he plants his leg and falls away from each throw -- can often lead to command issues.

According to a Baseball Prospectus report on Karns ($) from last August, there's very little life in his changeup and when his fastball dips to 92 (which it often can), he doesn't have the proper velocity separation to keep his third pitch effective. The lack of consistent arm speed and the disappointing movement cause the pitch to stay elevated and over the plate.

Karns's walk rate has improved as he's progressed through the minors, but he likely won't see serious improvement there until he can develop better consistency. Significant movement on both his fastball and curveball allow Karns to get by; but a future as a bullpen arm may be more realistic if he can only use two primary pitches and lacks control.

It is tough to predict what kind of impact Karns could have on the Rays in the 2014 season. He has MLB experience already, and he's already 26-years old, giving him a more mature outlook and approach than most Rays options in the minors.

However, acknowledging how slow the Rays like to work their pitching through the minor-league ranks, I believe Karns will spend a majority of time with the AAA club, working on his delivery and hopefully finding his changeup.

Karns has the look of a starting pitcher. After his acquisition, Andrew Friedman was quick to point out he thought the Rays could put 200 innings on his body on a yearly basis, but his future in the rotation depends on the development of his third pitch.

Any immediate impact in 2014 would likely come out of the bullpen, but even then arms like Enny Romero and Alex Colome could be promoted ahead of him. If injuries do plague the Rays' rotation in 2014, Karns could be a late season option to fill a gap in the rotation, but I tend to agree the most with Steamer's projections -- at most seven games started for Karns and a modest 4.24 ERA.

Approaching his age-26 season, his development in 2014 could be the defining year for his long-term projections in the majors. Nevertheless, Karns has two-plus pitches and ideal pitcher's body and the Rays' pitching development team is as good as that of any team in the majors. On the surface the match looks great, but it remains to be seen if Karns will be able to reach his ceiling of a mid-rotation starter.