Share All sharing options for: Season Preview 2014: Cameron Seitzer, 1B

The young Cameron Seitzer, 23, may find his way to Triple-A this season, and before yesterday you might not have known his name, even if it sounds familiar.

He is the son of Kevin Seitzer, a two time All-Star third baseman for the Royals and Brewers. Cameron has the same arm and build as his father, and even the same batting profile, but with one key difference: His defensive profile is completely limited to first base.

Seitzer was not ranked in the DRaysBay writers' Top-30 because he's an atypical prospect for his position, offering little to no power. He made my list of players to watch this season, but you might already be following him if you saw Fiday's Spring Training game.

Kevin Seitzer is with the Blue Jays this season as their hitting coach, and Rays manager Joe Maddon decided to bring Cameron along on the big league road trip to play for his dad. Cameron had played in a home game earlier last week, but is part of the minor league camp this Spring, making any appearance a rare occasion.

In the bottom of the fifth in the Rays' first televised game of the season, Cameron made his second appearance in a Tampa Bay jersey. Cameron had plenty of opportunities to show off early, fielding chopped groundballs well while covering the bag, laying out and showing great hustle when his chances came. His first at bat ended in a sharply hit ground ball up the first base line, but his second was a beaut, turning on an inside pitch and putting it well beyond the fence.

In this brief video clip of the home run, you can see Kevin Seitzer bury his face to hide his smile, ultimately tipping his cap multiple times as his son rounds the bases. It was a great moment.

Seitzer had been called up earlier this week from minor league camp in Bradenton, and hit a home run in that appearance as well. He may just have a place in big league camp, or if anything, at least another bus ride to Dunedin to face the Jays and his pops on Wednesday. 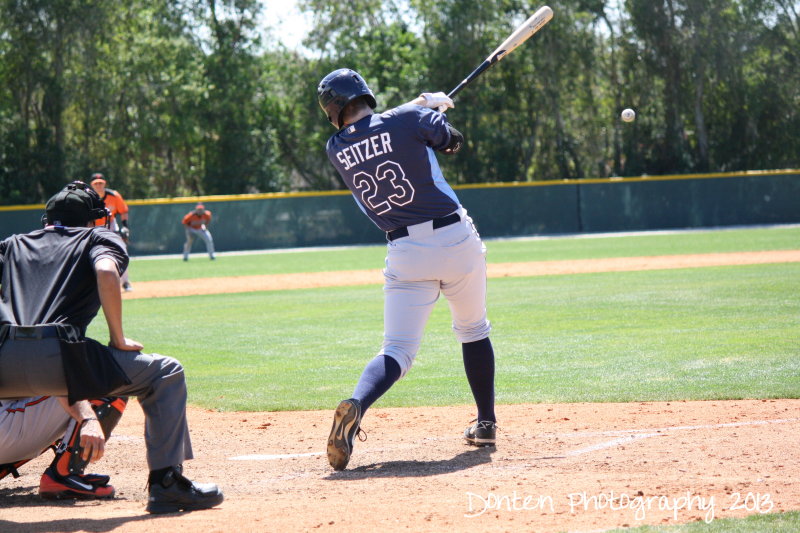 Seitzer may be atypical, but he's a first baseman in the mold of many other in team history not named Carlos Pena: a gap hitter with a building penchant for line drives (23.2% in 2013), but without the power that comes standard to the cold corner.

Selected in the 11th round of the 2011 draft, the Rays knew what they were getting in Seitzer. As a junior with Oklahoma, Seitzer held a .440 OBP with four homeruns, though he'd knocked 16 in the year before the bats were changed.

The new BBCOR bats effectively required non-wooden bats to produce batted ball speeds no greater than wooden ones. While it's true Seitzer had hit only four homers the season of the draft, his batting average had increased from .305 to .358 in a season where most averages were plummeting with the new bats. (Full study here.)

He answered the Rays draft choice with some solid pop for Princeton in the Appalachian League, then settled into his expected profile for Bowling Green. The Rays then made the surprising move of pushing him past Port Charlotte to Montgomery, and Seitzer did so without a significant dip in performance.

Seitzer has said that his dad taught him everything he knows, including weight training, and this off-season he's put on twelve pounds of muscle to continue the development of his power and speed. If he continues to respond well to upper-level pitching, perhaps this could be a break out year.

In terms of scouting Seitzer, there isn't much available in the way of video, but we do have the ground-level, off-center perspective from yesterday's game.

Seitzer has quick bat speed, but this off-season he worked to develop quicker hands. This separation frees up the elbows to move independently, and can be important for a player with a long swing to turn on pitches inside.

Seitzer has a long arms, so turning on inside pitches would often mean collapsing his back elbow against his side while swinging through the ball, as seen the mechanics of his college swing.

Having separation in movement between his wrists and the elbow allows Seitzer to drop his back elbow and get a better angle on the ball. In this case, that means lift this pitch and letting it sail.