Share All sharing options for: 2014 Season Preview: The Bullpen Depth

Several of these names however may be in a state of flux: Grant Balfour is dealing with a dead arm, which may or may not be standard for Spring, Joel Peralta is dealing with a stiff neck, Juan Carlos Oviedo was delayed weeks in returning to the States due to visa scrutiny (a product of his days as Leo Nunez) and hasn't pitched professionally since 2012 due to Tommy John recovery, Cesar Ramos is vying for a place in the starting rotation (a decision to come this weekend), and Josh Lueke just might not be the most effective option.

That's four or five slots to fill if everything goes wrong. The bullpen could be wide open.

Here's a look at some of the names vying for a place in the 'pen this off-season: 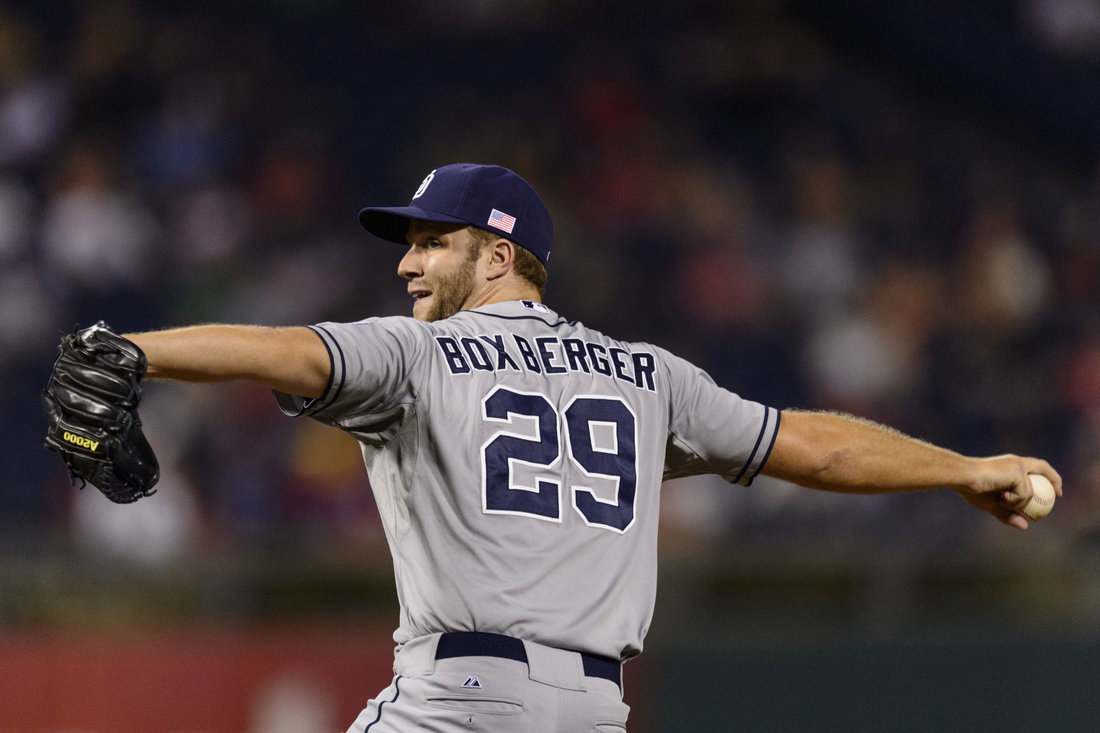 We all know the Rays love a good change up. Boxberger's old manager Bud Black labeled the change "swing-and-miss" for Boxy, a strikeout pitch, and we saw it in action often last night.

Both pitches have plenty of run, and each missed their spots but were incredibly effective. Boxberger had already used the change to strike out Chris Colabello swinging, and earned weak contact from the opposite-handed center fielder Aaron Hicks for a ground out.

The change is real, and it'll play to the major league pen, but having an option remaining likely means he'll have to wait. Oliver projects Boxberger to a 29.4% K-rate next season, with a 3.29 FIP, and ZiPS doesn't disagree. 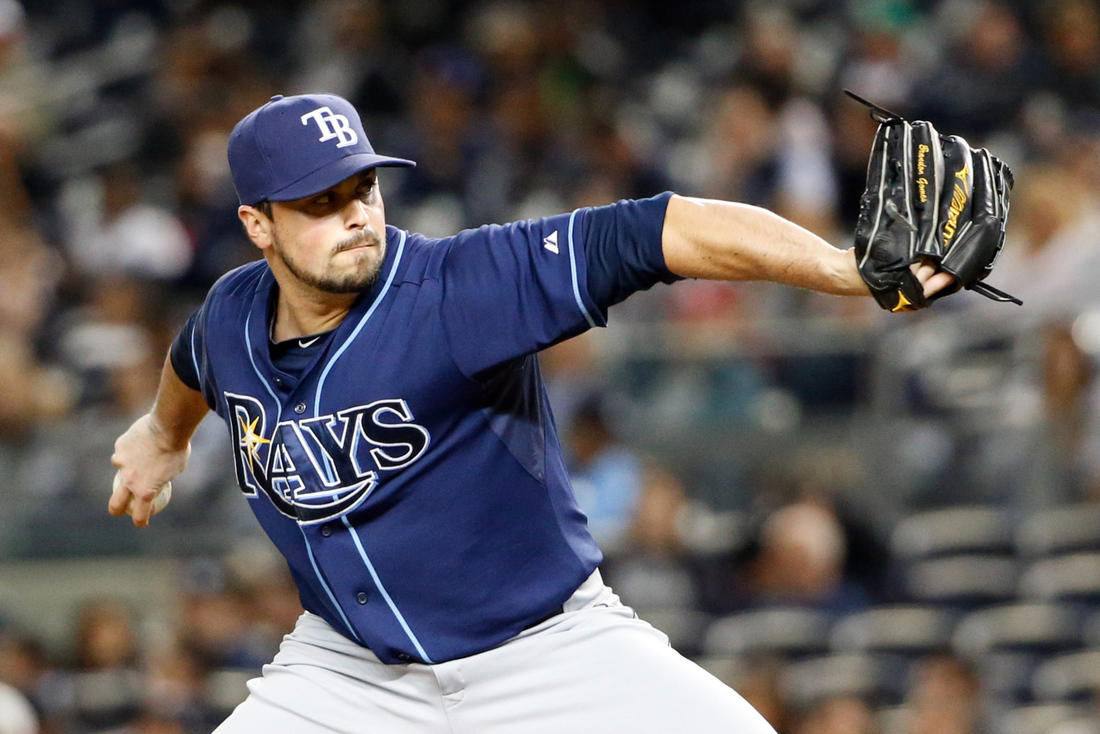 "How about Brandon Gomes? Nobody's even talking about this guy." - Joe Maddon

Clearly old Merlot Joe needs to spend more time in our comments section. Ian and I have been belligerent in our optimism for Brandon Gomes who we believe has the ability to become a high leverage arm for the Rays. Joe Maddon just might be on our side:

"... gosh, he can't throw the ball any better than he is right now. He cannot. He's made some adjustments in his delivery -- his command has gotten better, the sharpness on his pitches. Really fun to watch."

These quotes were captured by Bill Chastain, who struck a chord with Maddon when asking about Gomes's progress this winter. The reliever has not only added a cutter to his arsenal -- which he learned from Jamey Wright, who returned to the Dodgers this off-season -- but has added a slide-step motion to his game.

"My mechanics have been much more repeatable since then. I haven't lost any of my stuff. If anything, it's been better, and I'm quicker to home. So [there are] a lot of factors, it's just better overall." [mlb.com]

The slide-step became a "why not?" and led to a new confidence for the minor league reliever. Add this confidence and a bit more stuff to his cutter, which will help him against opposite handed pitching, and Gomes may be ready to fulfill the prophecy of Malinowski.

This is the closest I've come to finding the same angle from last year, while using 2014 spring training footage. On the left we see Brandon Gomes striking out Jordan Pacheco with the bases loaded on May 3, 2013. On the right, Gomes is landing a strike against Trevor Plouffe. The differences is in the leg lift to start his throwing motion. Both feature Gomes out of the stretch, but the effect is that Gomes doesn't lift his plant leg prior to swing-stepping into his delivery.

Simplification. The swing-step was built into his delivery without the leg lift. Minimizing his movements allows for better control as Gomes pitches across his body.

Gomes features a fastball/splitter combination that's death to righties, and the added cutter may give him some more usability at the major league level, but what's held him back has been injuries -- including back surgery in 2012, and a lat strain in 2013. Gomes pitches with a side-arm delivery, which adds deception, and I've wondered if his injury was related. This change in throwing motion may alleviate those concerns.

Thus far in Spring Training, Gomes has pitched seven full innings with a shiny 0.00 ERA over six games. He's allowed two hits and two walks, but more importantly struck out seven -- with two of those last night in Fort Myers. Gomes has options remaining, so he may not win a role in the 'pen out of camp, but he'll be back soon. 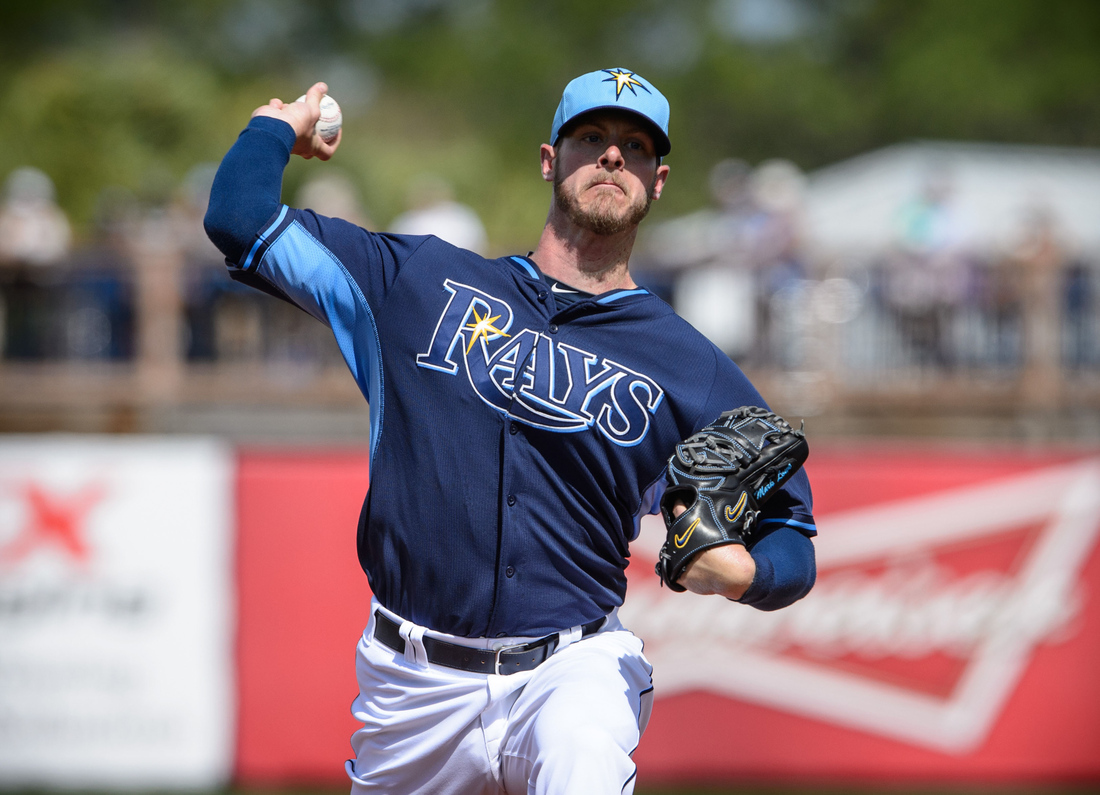 This was the second off-season the Rays pursued right hander Mark Lowe.

Joining the Rays on a minor league deal, Lowe brought with him the promise of high heat -- he consistently touches above 95 -- and a slider that's improved this Spring. Although that heat had abandoned him in 2012 due to mechanical issues, as Bill Chastain detailed for mlb.com, which translated into a mental issues as well.

Lowe struggled with his mechanics throughout 2012 and 2013 until some input from teammates at Triple-A Syracuse helped him along. After joining the Rays in November, Lowe added one last touch to his mechanics to help him "reset" on the mound:

"I found that when I come set, [if] I just get a little glove tap and put the ball back in my glove, it resets everything and gets me loaded powerfully again," Lowe said. "And so I'm able to just barely kick my leg up, and that glove tap gets me going. Instead of having to turn and waste a lot of time getting back around and uncoiling." [mlb.com]

This Spring, Lowe has a 1.50 ERA over six innings, along with five hits and one walk, as well as eight strikeouts.

Above is from this afternoon's game, a fastball at 92 and a slider to fool J.J. Hardy at 85. The breaking ball has been on this afternoon, and the slider has much more life than was expected when he came into camp. 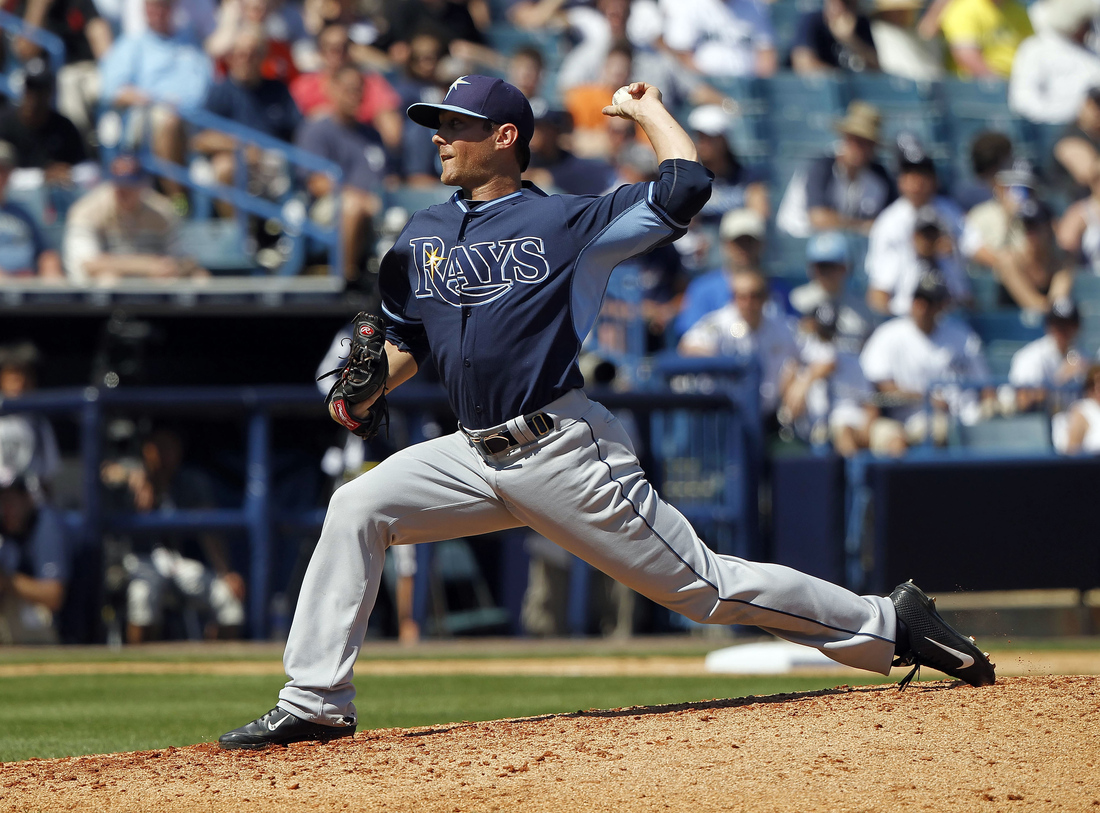 There are a slew of other relief options not covered above that we may see later in the season, and a great place to start is the 40-man roster. Known names include Mike Montgomery (L), a former blue chip prospect that seen the color run out of him, and Futures Game attendee C.J. Riefenhauser, but both are still being seasoned at Triple-A. Here's a few more to consider:

Pictured is Jeff Beliveau (L), a player effectively acquired from the Rangers for Robinson Chirinos (although each player was traded for "cash considerations" during a roster crunch in 2012). He posted a 38.2% K-rate with Triple-A Durham last season and was promoted four times (with only one appearance for the Rays). This is his last option year, and he should get a few more bus rides this season.

Kirby Yates was ranked 30th by the community voting for top-prospects, and rocked a 37.3% strikeout rate of his own. Known for mental toughness and a strange delivery, Yates picked up 20 saves for Durham with a 1.90 ERA. Yates has three option years remaining, but he might fight his way up the depth chart regardless.

Then there's the top Triple-A starting arms that some industry experts say have a bullpen trajectory: Alex Colome and Enny Romero. We will certainly see both arms at some point this season. The preference would be to keep them fresh in the rotation, but with the acquired depth of Nathan Karns and Matt Andriese this off-season, it would not be surprising to see a shift underway.

There's no shame in a future starter pitching in relief. The Rays have used this practice with young starters in the post-season, and other teams like the Cardinals are prolific in promoting their own top arms mid-season to the pen (Wacha and Rosenthal the most recent cases). This would be the argument for Romero.

For Colome, who was sidelined with elbow soreness last season, the argument is stronger. The wear and tear of his stutter-step then violent delivery is real, and a bullpen role may lighten the load. His mid-90's fastball could play up in velocity out of the 'pen, his newly developed cutter was incredibly effective last season, and he has a change and curve in his back pocket that can both be deadly.

When a high-leverage arm goes down this season, I wouldn't be surprised if Colome (in his last option year) was the first man up.

Finally, a few minor league names of intrigue: Steve Geltz, Adam Liberatore (L), and Juan Sandoval. Each have been getting their turns this Spring on the major league side, and although each would need added to the 40-man to make an appearance, it's not out of the question later in the year.