Share All sharing options for: Season Preview 2014: The Case for Cesar Ramos

The best man for the role of 5th starter is Jeremy Hellickson, let's make sure that is clear. The pitcher who takes on the fifth starter's role while Hellickson recovers from surgery (a routine procedure to remove bone spurs from his elbow) is only temporary.

Candidates for the job are down to rookie starter Jake Odorizzi (recently ranked the Rays top prospect on aggregate, and who recently added Cobb's split-change), recently acquired prospect Nathan Karns (stiff delivery, great stuff), veteran Erik Bedard (he of six pitches and nothing to do with them), and the pen's inconspicuous longman Cesar Ramos (who we turn our attention to now).

Erik Bedard: The once (and future?) Strikeout King

This morning was the deadline for that decision, given Bedard's contract (which includes and opt out, and a $100K bonus if he's on the roster March 25th), and a desire to get the rotation in order for the season, but Joe Maddon deferred:

Make what you will of that...

If I had to make a prediction, I'd lean towards Cesar Ramos winning out.

There's a lot to like about Cesar Ramos's game, and we have not done a proper job of giving him the credit he's due. Just as players like Ben Zobrist and Sean Rodriguez have played just about any role asked of them, Ramos has been a swiss army knife for the pitching staff. He's served as the long man for the back of the 'pen, the LOOGY when there was no one else effective enough for the role, and even made a start. 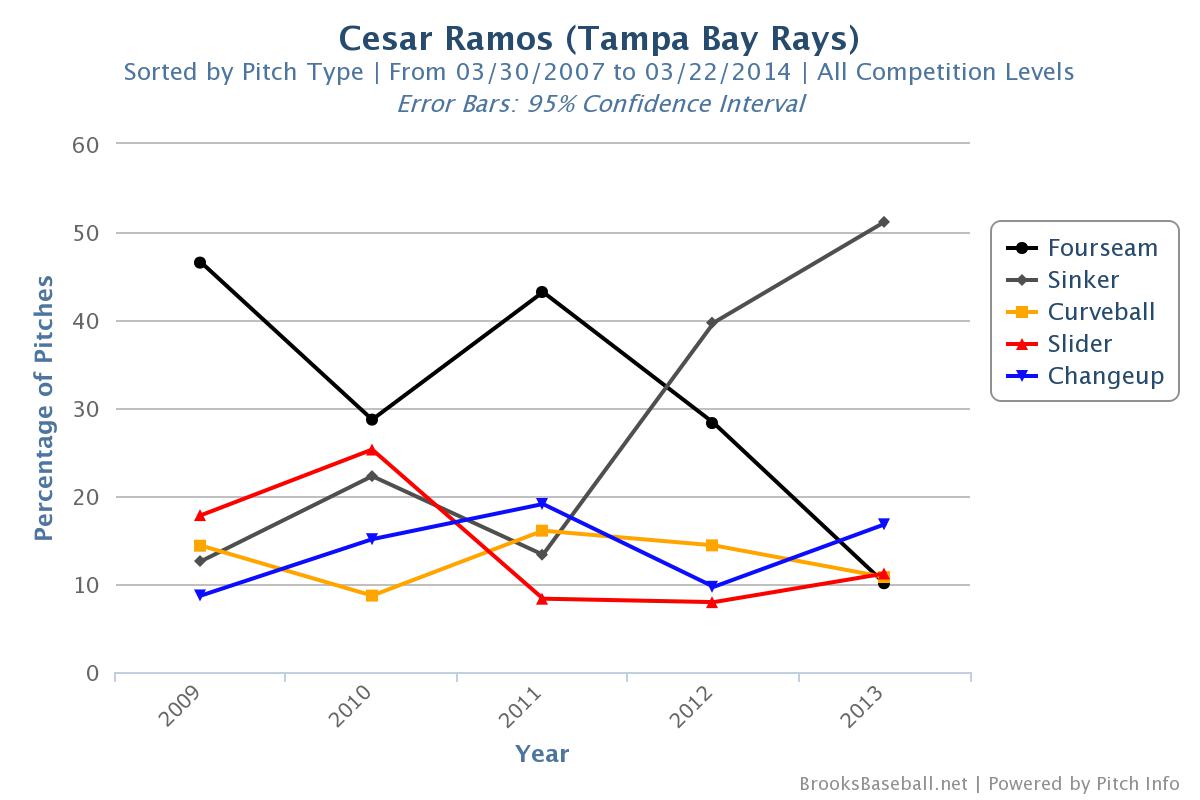 Ramos underwent a transformation in 2011 as he switched from a four-seam approach to his fastball to a two-seam. In 2012, the Rays even thought this would play into another go at starting, and sent him to Durham to try it out in July of that year. The transition never happened and Ramos was brought back to the majors in a relief role, though he did settle into a 6.0 IP performance of four base runners and six K's in his final attempt.

Last season, Ramos leaned more heavily on his two-seam fastball than ever before, using it more than 50%. Here's an example of the pitch sneaking in on a left handed hitter for a healthy called strike:

However, the fastball is not his darling.

Stuart Wallace identified Ramos's changeup as one of the best among relievers last season, using z-scores to parse data on linear weights. He averaged under 20% for its use, though that may change in a starting role, and it can be quite deadly.

Ramos gets about four more inches of horizontal run on his change up than his four-seam fastball, but it is nearly identical to his two-seam, with as much as a ten mile an hour gap in speed. He tends to throw it arm side against right handed hitters, and in effect can really make them look silly. 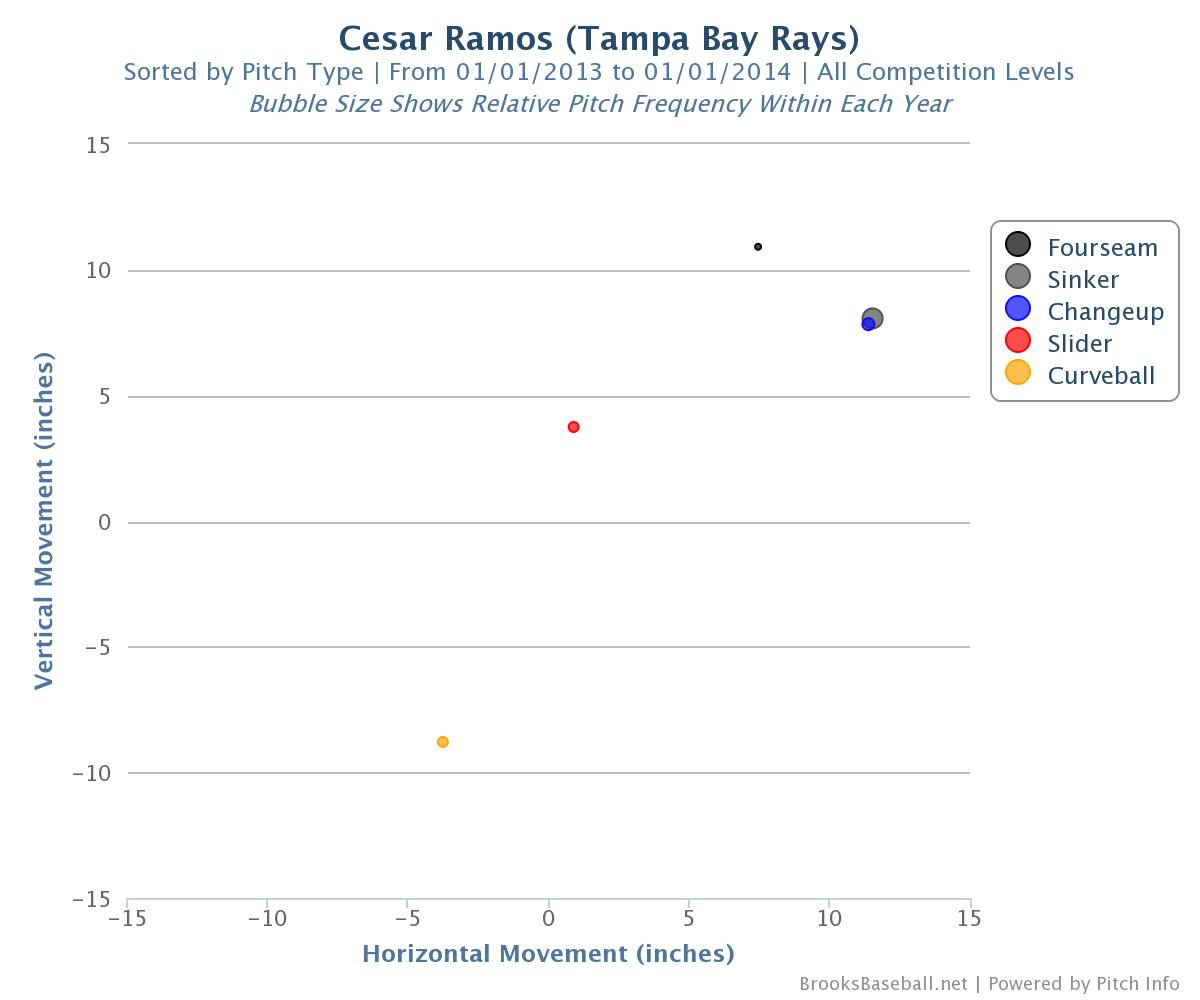 The change and slider each excelled last season, with 21% whiff rates overall, and all three of Ramos's non-fastball pitches had strong whiff rates per swing, each above 35%.

The curve plays best when Ramos's command is on, as seen here:

Although the main use of the curve is a hammer against righties. Ramos hit the zone with 70% of his curves last season, but concentrates his approach to the natural, glove side corner, also his preferred location of the slider. Contrariwise, Ramos with paint the arm side of the strikezone with his two-seam and change, but not afraid to round out the bottom of the zone either and expand hitters' approach.

Splits are fairly neutral for Ramos, with a .304 wOBA vs LHH and .291 vs RHH in 2013, partly because his approach hardly varies between hands by movement. If the batter is left handed, odds are he'll be facing two-seam inside and slider away. If the batter is right handed, Ramos switches to the curve and begins mixing in his changeup, particularly if the batter is ahead. If Ramos gets behind the batter, he'll ride the sinker until things even out. His process is to get the most out of his stuff, and let the batter sort the rest out.

Ramos is out of options, so he was already a lock for the major league roster. Moving him to the rotation makes room for other arms to join the 'pen, like Mark Lowe or Brandon Gomes, should the Rays feel Bedard or Odorizzi is not the right choice for the rotation.

He hasn't faced more than sixteen batters in a Rays uniform, and never pitched longer than four innings. Ramos has pitched into three innings fourteen times over the last two seasons, and in ten of those appearances he allowed two base runners or less. Overall, he struck out 23.8% of batters faced in appearances that reached a third inning. If he can continue that level of performance, Ramos should do fine as a stopgap to Hellickson.

It helps that Ramos has impressed over the last month. Spring Training stats be damned, it's worth mentioning that Ramos has held opponents to four earned runs in 13.2 innings pitched, with 11 K's, 12 hits, and one walk. Whether Ramos has the stamina to replicate that level of play over six innings (as opposed to three) has yet to be seen.