Jeremy Hellickson was on the mic at FanFest for Rays Radio, and was asked by Steve Carney and Tom Krasniqi about his recent elbow surgery.

The surgery, to remove loose bodies in the elbow, is one typically conducted in October but was put off until early February, shortly after he concluded salary negotiations to avoid arbitration with the Rays. This was Hellickson's first surgery of any kind.

Earlier reports seemed to indicate that Hellickson was aware of his arm injury, but was not aware of the severity. In his interview with WDAE he did not confirm or deny that he had felt there was an injury prior to last season ending, even when he was asked directly by the hosts, but he would say there was "tightness."

Some have speculated that Hellickson may have masked the injury in the off-season until his arbitration had been settled, thus avoiding October surgery and keeping the Rays from having ammunition against his case. He would then arrive at Tropicana Field, throw his first bullpen session, and find his elbow locking up.

Here's the problem with even mentioning that: we don't know that's how it played out. We don't know if that's true. We don't have good reason to believe this was all a Scott Boras conspiracy. We can only look at the facts and draw conclusions.

It is a reasonable conclusion, one member of our community have put forward in the comments, one that media members (and maybe even teammates) can easily pick up on. But it's still speculation.

All we know is that his injury timetable is now June 1, and whether that will include rehab starts in the minors has yet to be seen. 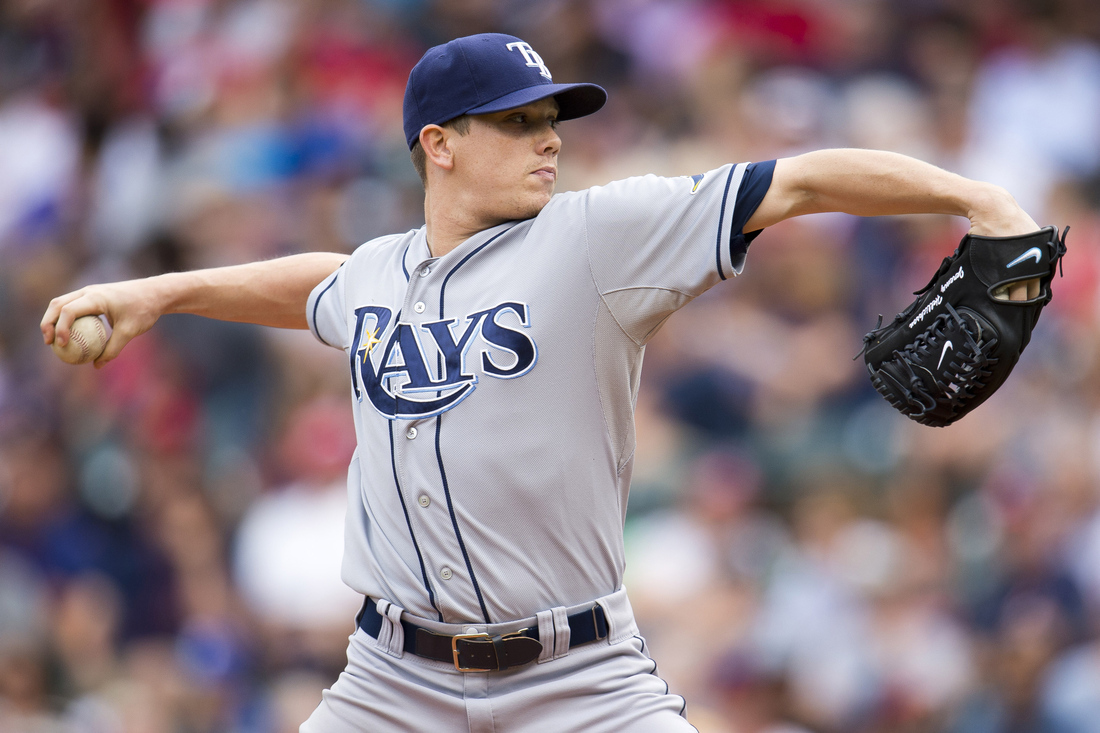 Where did this injury come from? During the season we saw a two-game performance of higher-than-usual velocity from Hellickson. That was followed by two games of severely diminished velocity, three games that were maybe-normal but with a lower average, and then a three inning stint that floundered. The latter five of these six starts comprised the month of August, where he allowed a .437 wOBA for a 5.56 FIP and 6.12 xFIP.

The next day, he was sent to Port Charlotte.

For the first time in four years, Hellickson was optioned to the minors. The goal was to avoid the disabled list -- though the Rays would claim there was no injury -- by giving him some ambiguous time to rest his arm. He traveled to Port Charlotte, and presumably left his glove in his suitcase, returning after ten days.

Two items stand out, and both are an illusion, distorting your view of Hellickson's talent with some unfortunate results.

First of all, the larger HR/FB% is exaggerated by the sample size of limiting our scope to men on base, as Hellickson's full season rate was in line with his mark for bases empty at 10.9%.

The other outlier here is BABIP...

That BABIP was largely influenced by three factors: "luck," which I disseminated in the linked article, and two topics smartly pointed out by Jason Collette -- an unwillingness to pitch inside, allowing for predictability in high leverage situations, and poor mechanics pitching out of the stretch (re: with men on base).

In terms of these mechanics, watch Hellickson's left leg in his delivery:

The first video is from May of 2012 and shows a full lift and easy delivery. The second video is from late July of 2013, and we see a nearly identical motion.

Now watch what happens with runners on:

You'll notice the leg doesn't lift at all in the second video, and instead features a quick slide out of his left foot before the rest of his throwing motion follows as it should. It's quick, but it lacks momentum, and could be a source of issues with men on base. 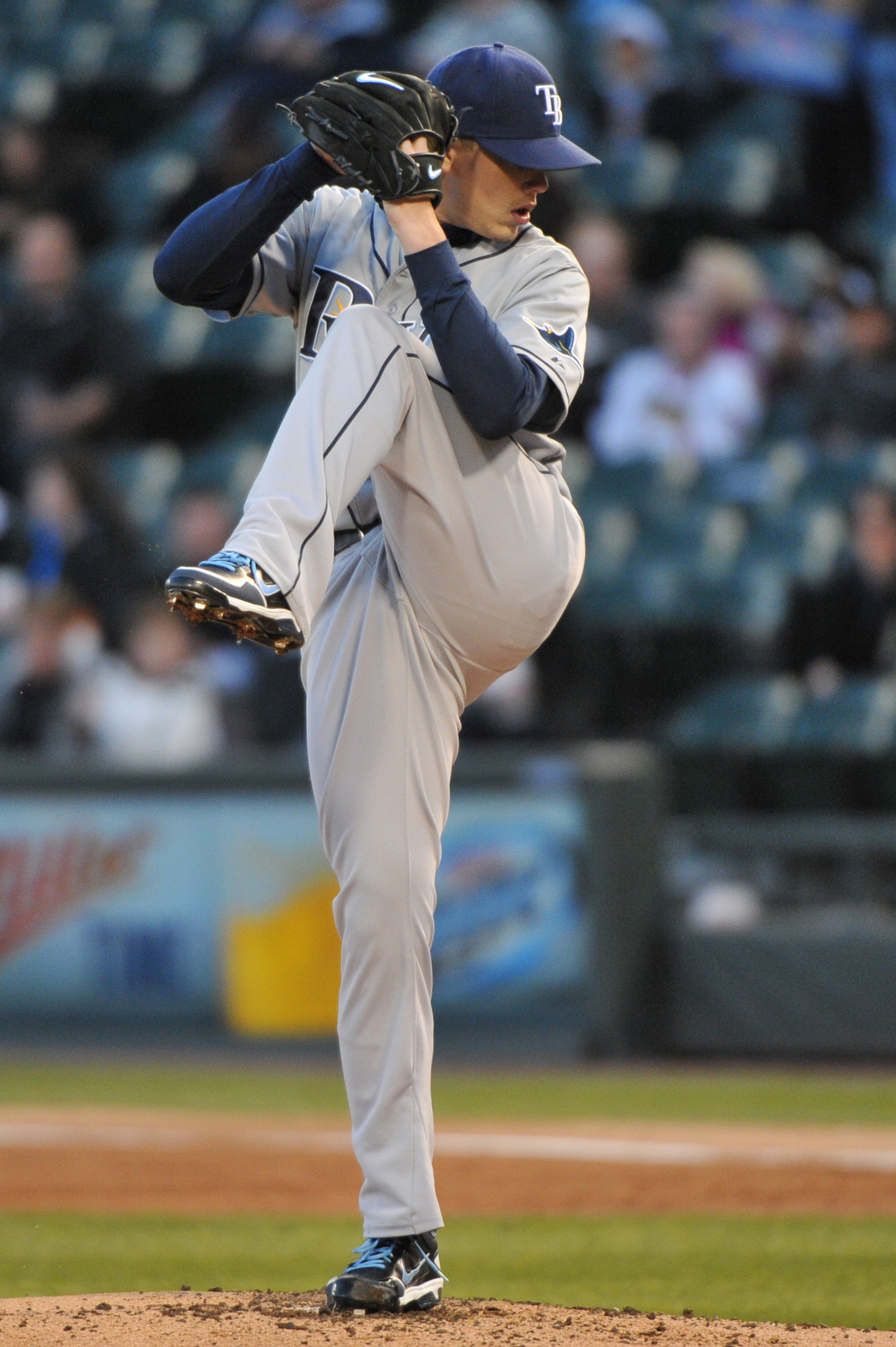 It's important to mention, however, that Hellickson's abbreviated mechanics with men on base is not new. For instance, compare this cutter to this curveball, both taken from the same game on July 18, 2012 with runners on base.

Likewise, compare this sinker from mid-September last season, to this fastball and this curveball, both from the same start the following week, and again all three have runners.

The fastball came in 2.6 mph slower than his sinker, and for good reason. Without the proper leg lift, he doesn't have the same stuff behind the pitch. Rightfully so, the latter was sent to beyond the outfield wall. Then there's the curveball, which had the proper leg lift and still had an unfortunate result.

The problem is not always there, and it's not the only issue in Hellickson's game, but it's an obvious one. 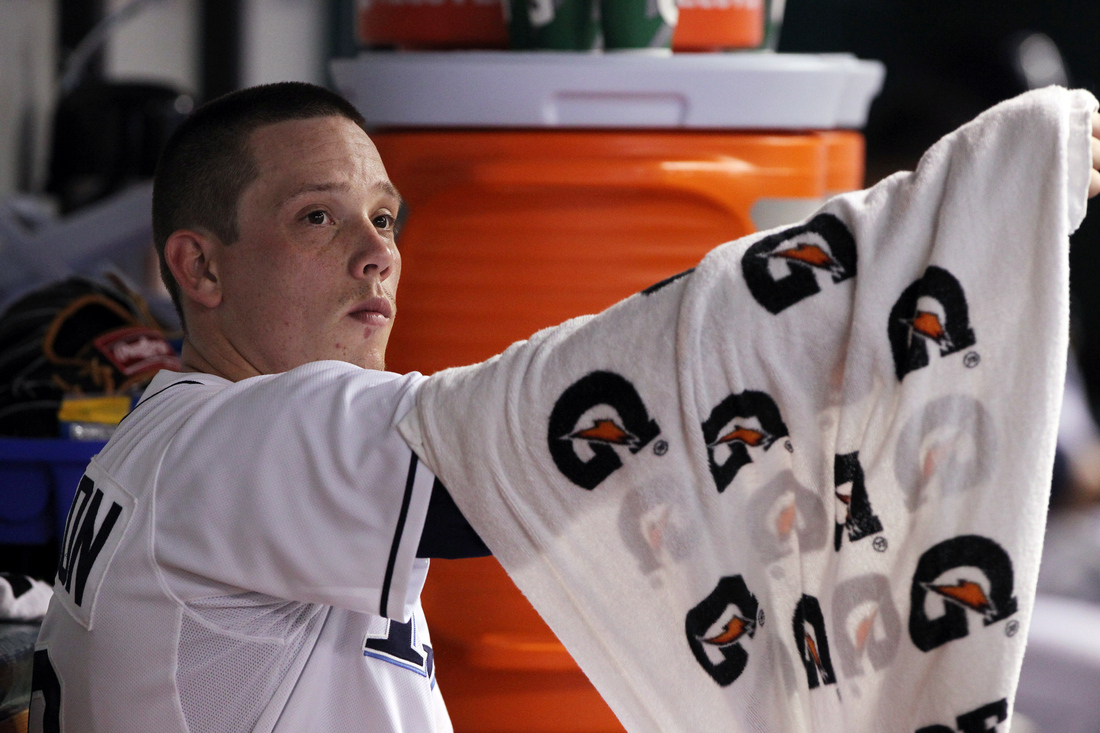 We won't be able to make much of Hellickson before he returns to pitching, but the questions for his 2014 season are clear:

Will he return to being effective?

Hellickson posted career bests in strikeout and walk rates, indicating his control of pitches was not lost, even if the command was lacking.

Will his delivery have consistency?

Hellickson tried to learn much from James Shields in regards to holding back runners on the base paths, but his condensed throwing motion is not one of them. Perhaps it's meant to confuse base runners on when to get their leads. Either way, it seems ill advised.

Is the velocity a problem?

Aging players see a decrease in velocity, and Hellickson had loose bodies (bone spurs, etc) in his elbow, so it's hard to tell what's up or down, but I'm leaning towards this being a lesser issue. As mentioned above, Helly has not lost control of his pitches and was earning his strikeouts better than ever last year. I do wonder if the quick step takes any edge off his fastball velocity mid-game, compounding the negative effect of batter performance with men on base by giving them an easier fastball to hit, but that's a different sort of issue.

Can Hellickson start pitching inside?

There's a new level of success to be found if he can expand the zone and maybe push back lefties with some gloveside action, but he just refuses to throw it. Even pitching from the first base side of the rubber doesn't get him to challenge on the left side on a consistent basis.

Will the pitch mix change again?

Each fo the last two off-seasons, the topic of conversation for Hellickson was looking for an out pitch, and he never found one. He added a sinker to his arsenal in 2012, and continued to used it around 10% against same handed pitching to differentiate from his fastball last season, but he dialed it down against lefties. Late in the year he started firing more first pitch fastballs and more change ups late in the count against righties, but that was the only shift; and it was against lefties that he posted a higher FIP by half a run.

Will he be traded?

There's a log jam in Triple-A that just keeps growing: Jake Odorizzi, Enny Romero, Alex Colome, Matt Andriese, Nate Karns, Mike Montgomery, and more, not to mention Erik Bedard likely subbing for Hellickson while he's away. Who knows if another plague of injuries will strike the Rays like last year, but there's not an unreasonable expectation that the Rays will rehab Hellickson's arm, showcase that he's his old self, and then flip him at the trade deadline.

With a contract nearing $4M this season, I think the always cash-strapped Rays can simply do better with one of the aforementioned rookies if Hellickson can't make the necessary adjustments to demand the salary of a player in late arbitration.

Even then, sometimes you throw with a proper motion, inside to a left handed hitter, with a decent sinker, and you still allow runs to score.