Framing the discussion on Ryan Hanigan and Jose Molina

Share All sharing options for: Framing the discussion on Ryan Hanigan and Jose Molina

Pitch framing is a common topic of conversation at DRaysBay, but it's not common knowledge for everyone. Whether you are new to the concept of quantifying a catcher's framing of the strikezone, or a seasoned sabermatrician, it's important to know where this research is coming from.

At first, catcher framing metrics were the diamonds in the rough at the bottom of the coal mine we call PITCHf/x data. The industry's best got hired, and there was a season in 2012 when we weren't sure what the numbers were. And the industry's best prospects responded. StatCorner began culling runs above average in regards to calls on the edge of the zone, which could be used to recalculate WAR for catchers on a casual basis. Then Baseball Savant added tools for identifying the ins and outs of particular performances in the zone, which you could match to catcher performances, but were still tied to the pitcher. Still, the topic was muddy water, a necessity to quantify catcher performance, but not easy to swallow; until Monday.

Before we trudge on to the new-present, though, we need to fully understand the past. For that, I will re-direct you to Brad's incredible deep dive on The State and Future of Pitch-Framing Research. It was a poignant article given what was to come a week later. Are you done reading? Great, but are you ready for the new normal?

Finally, there is clarity in what has been a murky topic for years. To borrow the phrase, it was a known unknown for many, even if the data existed in difficult to comb places. Vin Scully could discuss the topic on the airwaves, but that didn't mean his listeners could quantify the talent over a full season. Until now.

The future is here, and it's graphically represented for all to see.

Dan Brooks and Harry Pavlidis have done some hard work behind the scenes to bring easy summarization to the quality of catchers.

Their website now features a Catcher-at-a-Glance front page on each player to describe the player, as noted below, and delivers all pitch types recieved since 2007, as well as tallying their production in runs saved.

Currently under construction are sections on Blocking, a Composite representation, and strikezone Maps, so this is just the beginning.

Here's what you would currently find on the Rays catchers:

Here is the 2013 front page summary for Jose Molina, featured in the Catcher-at-a-Glance section:

In 2013, in 4,770 framing opportunities (i.e., taken pitches), he was an exceptionally good framer, which resulted in 178.95 extra strikes than would be expected from a league average catcher. This was tremedously valuable, resulting in 23.94 saved runs (worth approximately 16 million dollars).

As we covered in an earlier article on the approach of Rays hitters, the Brooks system provides descriptions for players based on their internal framework, which allows them to throw around phrases like "exceptionally good."

You can also visit the Framing tab, which features Extra Strikes in total and rate, as well as Runs Added in total, by rate (per pitch), and per 7,000 opportunities. This last one is helpful for a player like Molina who worked in a back-up role before 2012.

These are Molina's run saved totals since 2007: 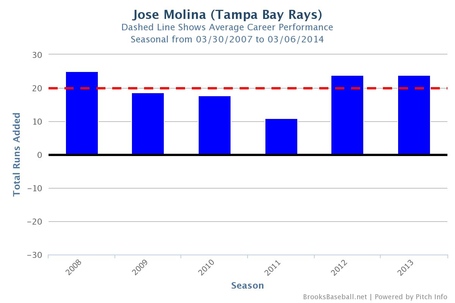 But, helpully, this is that same performance projected over 7,000 opportunities. 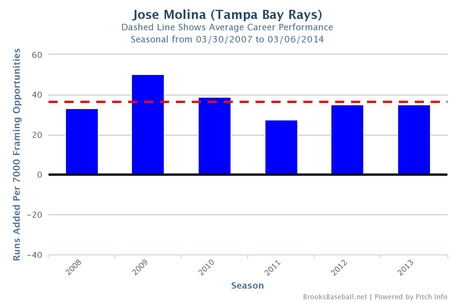 2009 stands out especially, when he was part of the World Series winning Yankees but in a back up role. Molina had fewer opportunities to showcase his talent that season, but his performance was significant.

Hanigan has received only 1,110 more pitches than Molina since 2007, so our comparison will not be far off in aggregate. What would be, however, is Hangian's 2013:

In 2013, in 3,573 framing opportunities (i.e., taken pitches), he was an above average framer, which resulted in 56.15 extra strikes than would be expected from a league average catcher. This was quite valuable, resulting in 9.23 saved runs (worth approximately 6 million dollars).

Though still a positive figure, you'll note how much less valuable Hanigan was than Molina. It's important to remember that Hanigan's playing time was hampered last season by injury, so the numbers would come out less.

Still, we can use the same per 7,000 opportunitites extrapolation to see Hangian's chart, and find numbers still averaging above 20 runs for that amount. 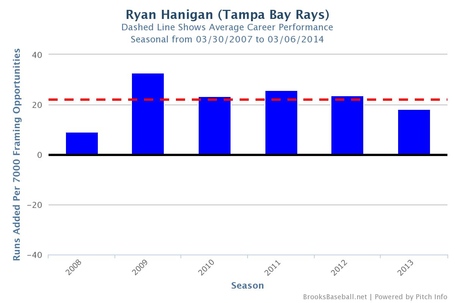 Hanigan approached 20 runs saved through his framing skills in his significant seasons as a starter in 2009, 2011, and 2012. In other seasons, he did not have the lion's share of games.

Already named the Rays' starting catcher in 2014, as the aging Molina shifts to his old role as a back up catcher over the next two season, it's not unreasonable to suspect Hanigan will reach 5,000 opportunities and save as many as 20 runs this year, presuming good health. 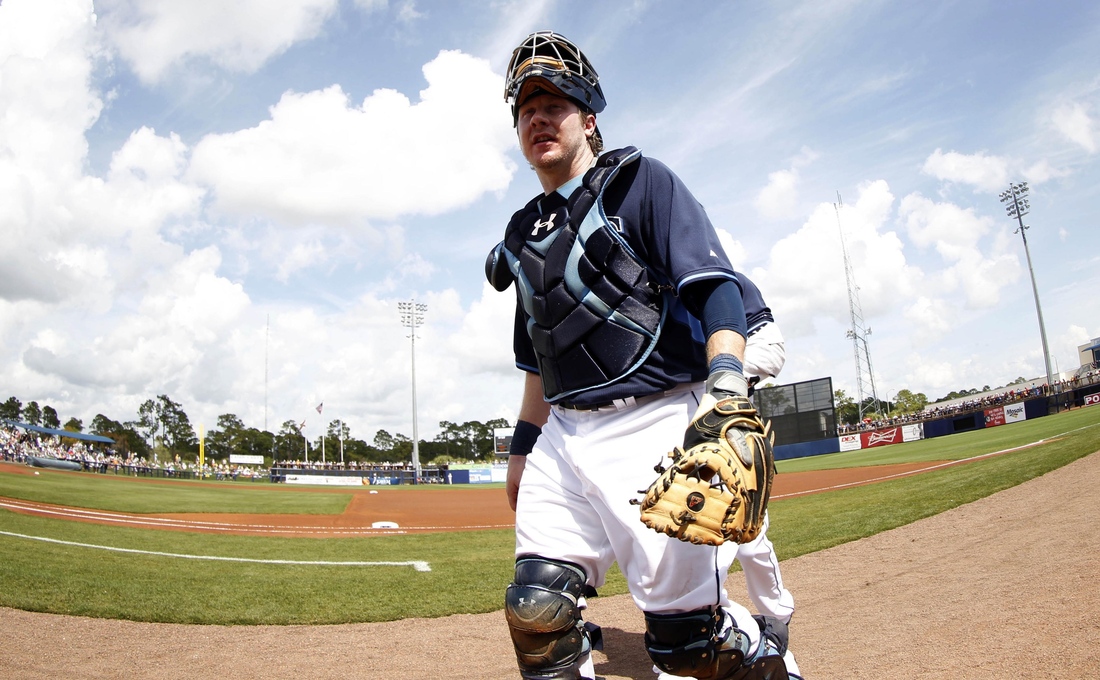 Pavladis and Brooks also help run the stats over at Baseball Prospectus so should you want to take advantage of the sortable charts and other features available at BP, the data will match what you find at Brooks Baseball.

In regards to context, there were only five players who saved more than 20 runs based on calls in 2013:

The Runs by Count columns indicate the number of runs assigned using a generic 0.14 runs per frame, but the Runs by Call columns use assigned contexts based on the batter's count and its influence on the game. The per 7,000 columns are simple projections based on the same rate.

For context, here is how Hanigan's most recent full season compares to the top five from 2013:

What we see is a glove not far off from the highly respected Chris Stewart, and what would have been the fourth best performance last season by count; sixth best by call.

The next closest Runs by Call performance in 2013 was Yadier Molina's 16 runs saved, and even with an injured season, Hanigan placed 12th overall in Runs by Count.

With their powers combined, the Rays might challenge the Pirates (who have Russell Martin and Chris Stewart) for the most framing runs in 2014.

For more on pitch framing, please check out the following links to work by Ben Lindbergh, who was the champion of framing metrics last year, and has a regular column at Baseball Prospectus titled "This Week in Catcher Framing" that is well worth your time.