The Rays and starting pitching depth

We all hope that the Rays can avoid the injury bug, but it's bite is all but inevitable. How well are the Rays equipped to handle an injury to one of their starting pitchers?

Share All sharing options for: The Rays and starting pitching depth

Sorry, this is something of a morbid subject. However, pitcher injuries are all but inevitable. Not every team is as fortunate as the Detroit Tigers were last year, who used just six starting pitchers the entire season, with Anibal Sanchez being the only one to make a DL trip.

For the most part, the five-man rotation is a myth. Most teams will use several starters, and give approximately 30 starts to pitchers who were not in the rotation on Opening Day. Last year the Rays gave starts to ten different pitchers, as David Price, Alex Cobb, and Matt Moore all spent time on the DL. Those replacement starters (Enny Romero, Alex Colome, Jake Odorizzi, and Jamey Wright) threw 42 innings, total 0.0 fWAR, and 0.4 bWAR. In a sense, their starting pitching depth has already been tested, as Jeremy Hellickson's elbow injury will keep him out till late May or early June.

Looking to the 2014 season, who are the most vulnerable pitchers on the Rays staff, and how well are the Rays prepared to handle pitching injuries?

Now, predicting pitcher injuries is far from a perfect science. In fact, it's basically educated guesswork, at least in the public sphere. However, Jeff Zimmerman has created a model to predict pitcher injuries that worked quite well in 2013. Here's a look at the data he's produced for 2014 as it applies to the Rays.

Price, who made his first DL trip last year, has a 35.6 percent chance of spending DL time according to Zimmerman's model. That might seem high, but 39 percent of starting pitchers who threw at least 120 innings in one year will end up on the DL the next year. While his velocity was down a full two miles per hour in 2013 from 2012, Price made a seamless transition after he returned from the DL, Also, he's throwing more changeups, a pitch that puts less stress on the arm.

At 42 percent, Cobb gets the highest DL chances of any Rays starter. Cobb has made two DL trips in the past three seasons. Of course, one of them was due to a line-drive which hit him in the head, and not an arm injury. The other was initially thought to be discomfort in his right hand, but it ended up being blockage in his rib which required season-ending surgery. Neither of these are arm or shoulder injuries, and Zimmerman's model doesn't differentiate between types of injuries. Still, it's probably worth noting that he's never thrown more than 177.2 innings in a season.

Moore, who missed time last season with a balky elbow, comes out at 35.1 percent. While Spring Training stats are basically worthless, Moore's 15 walks and 6 wild pitches in 17.1 innings might be a sign that his body isn't right. Or maybe that's unnecessary worrying. He still possesses excellent stuff, but his struggles last year make it look less likely that he'll be a No.1 starter. Throwing 200 innings seems unlikely, but despite a balky elbow, he's made 58 starts over the last two seasons. 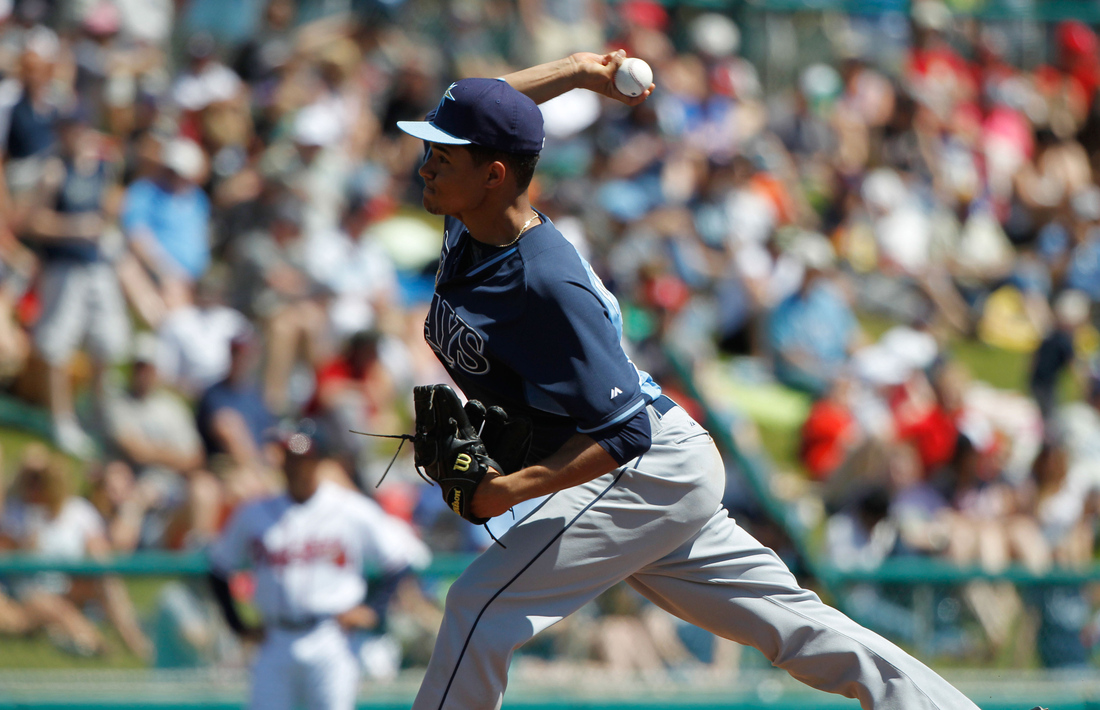 Archer has been quite durable in his young career, and his DL chances come out at 33 percent, a relatively low number. He hasn't made a DL trip yet, and dating back to his age-19 season, he's made at least 26 starts every season. All those sliders and that juiced-up velocity can't be easy on the arm, but maybe this is the year he starts working in the changeup regularly.

Odorizzi, who was pushed into No. 5 starter duty after Hellickson went down, didn't throw enough major league innings last year to get a projection. He's been injury-free in the minors, though he's also never thrown more than 154 innings in a season. No. 5 starters typically aren't asked to make 30 starts in a season, and Odorizzi might just be placeholder until Hellickson comes back. ZiPS and Steamer don't like him, but then they're not working with a ton of data either.

In the event of injuries to any of these five starters, the Rays are reasonably well-equipped, though they aren't swimming in depth. Colome, who made three starts last year, was recently suspended for 50 games for use of a banned substance. When he comes back, he could be a fill-in if needed, but given his control issues, he's probably around replacement level or below.

Nate Karns was plagued by dingeritis in his three starts for the Nationals last year. ZiPS and Steamer think he's decent enough, though the caveat for players with very little major league experience applies. It's more likely that the Rays would prefer to use him out of the bullpen, at least in 2014.

Erik Bedard is back with the Rays in Triple-A Durham. He was serviceable for the Astros in 2013, though he got battered in Spring Training. The 35 year-old left-hander is usable if need be, though prepare to be frustrated by walks. Matt Andriese might be an option as well, though he's further down the organizational depth chart.

Overall, the Rays are in better shape to handle injuries to their starting pitchers than teams such as the Seattle Mariners, though they aren't nearly as well off as the Cardinals or Red Sox, who have a bevy of arms ready to step in. Let's hope for a healthy 2014, and that Odorizzi will pitch well enough to keep his spot when Hellickson returns.