Is the MLB Draft unfair to low-revenue teams?

Rays principal owner Stuart Sternberg was quoted on the record as saying the current draft order in baseball is essentially hogwash. Here's the quote as captured by the great Howard Bryant:

"There's one issue that trumps everything, and we've been banging the table on it... It's all about the amateur draft. God bless everybody, but for the Cubs to pick second this year, and the Red Sox to pick sixth? Draft order should be based on revenue. We and others get penalized for success. We've had six years of not having a pick in the top 20. I'm not saying we need the No. 1 pick every year, but really?"

There's much to be said about inequality in baseball. There's something about the structure of the game and the gross disadvantages of teams like the A's and Rays that brings the best and brightest out of people. You could offer that such inequalities are the reason baseball has become so great to watch at a macro level, or you might even offer it as the reason you are a Rays fan. David and Goliath appeals to us all.

Still, baseball has made great strides toward equality. Revenue sharing, for instance, is a brilliant institution that kept the sport thriving and growing to 30 teams during the last fifty years. Without that system in place, it's arguable that the Rays never come to Tampa Bay.

Then again, there are other measures that hurt the Rays when they try to fly under the radar, like penalties for overspending internationally. Now the Rays can no longer spend as freely as they would wish, and an unwanted light has been shown on places strategies they'd rather keep in the dark. The Rays dropped a ton of cash overseas during the 2012-2013 season, and took penalties for doing. Teams took notice and followed suit when they thought the following draft class might be weak, and some even started trading for cap space on the international market. Now the Rays are once again the little guy, in an area where they were previously landing arms like Jose Mujica and Jose Castillo without much notice.

All of this is to say that MLB does a lot of good and some bad in leveling the playing field; but MLB tries, and that's important. So let's talk about the draft. Should draft order be based on something other than the previous year's record, like revenue?

The two leading organizations that provide details on team revenue are Forbes and Bloomberg. Those figures are graphed below, provided in millions for 2013: 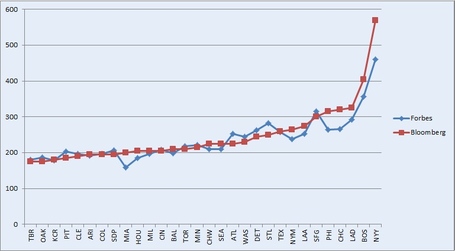 There are only five teams where the lists differ by more than $40M: The Yankees, whose revenue streams are the most difficult to publicly identify between concessions, merchandising, and international investments, the Cubs, the Phillies, the Red Sox, and curiously the Marlins.

To look at how revenue could impact draft order, I will use a simple draft order of listing teams by wins, from least to most. This will not account for situations where teams forfeited picks or added new ones, and will thus include all 30 teams.

This is the simple draft order as a result of wins and losses last season, and includes an average of the Forbes and Bloomberg reported revenue for 2013. If you were to average each team's 2013 simple draft order position with it's ranking in the revenue listing, you would get the following:

Using this perspective, where revenue and wins are weighted equally, the Rays rise 12 slots in the draft order this summer. Other high risers are the Athletics (11) and the Royals (10); meanwhile, the biggest drops belong to the Cubs (-12), Phillies (-11), and Giants (-11). Half of the teams moved more than five slots in either direction.

Here's that same logic applied to the infamous draft from last summer. As a reference point, I will continue to use the current year rankings in revenue:

In this situation, the Rays and Athletics have the most to gain, each rising 11 slots in the draft order, while the Red Sox and Cubs each fall heavily (-12). In this year, however, only twelve teams deviate by five or more slots.

When a certain team is having an outlier season, it's interesting to at least see a running average of draft position over a three year window.

This immediately causes a distortion of draft position for teams like Boston and Washington, but leaves the Rays and Cubs on opposite ends of the spectrum. If you equally weight current avg. revenue standings with the three year average of draft order positioning, is the list more "fair"?

Here we have an even starker contrast when comparing actual simple-draft order placement to what is the New Order* -- again, equally weighting average revenue performance with a three year average of draft order performance.

In this situation, the Red Sox now fall 18 slots in the draft order, while Oakland rises 16 slots. The Phillies fall 14, while Baltimore rises 14 slots, Washington and Cincinnati rise 10 slots, and the Rays rise 7 slots based on 2012.

By comparison, here are three year averages for 2013:

We already see some more telling averages for Pittsburgh, Philadelphia, and Boston. Here's what happens when you equally weight the 2013 three year average with the revenue listing:

Under this method for 2013, ten teams would change draft position by ten or more slots, and seventeen would move by five or more slots in either direction.

Does this double count success?

I've already acknowledged that this is an incredibly simplistic approach, and one that I think paints an accurate enough portrayal of disparity in the draft order, but there is a relationship between revenue and wins that I haven't discussed above.

Wins brings playoff runs, and the playoffs bring more revenue. It's a compounding factor for the biggest earners. When you order teams by revenue, you're catching some of the record, but only on the high end of the spectrum.

Even if the Rays win 95 games and win the World Series three years in a row, they still won't make as much money as an 85-win Yankees team. Only for teams with more similar revenue streams to New York will the "make money by winning" effect matter. That's why it's probably a good idea to factor in the three-year record.

It would be a shame to penalize teams for having one good year that they may not be able to sustain. To do so would provide an incentive not to make a playoff push. By looking at one-year revenue and three-year success, you're capturing two different things:

Combine the two, and I don't think anyone gets penalized too harshly. Then again, Mike Trout was drafted 25th overall in 2009, so picking near the end of the draft won't preclude teams from acquiring talent. (Trivia: 2009 was the third year in a row the Angels had finished in the top three in wins. Using a three year average, weighted equally with revenue, the Cubs would have picked 25th that season, and the Angels 28th.)

The best way to summarize this is to focus on four teams in particular: Boston, Chicago (NL), Oakland, and Tampa Bay.

What method is the most fair seems quite subjective, but when as many teams seem to have something to lose as they do something to gain by incorporating revenue even at the most simplistic levels, it's doubtful owners would ever be able to vote through a change in the draft order.

A decision would have to be made by the Commissioner's Office, to be sure, and there is no clear winner for a method by which that would be accomplished.