Votto we 'gonna do in game three?

Share All sharing options for: Series Preview: Rays at Reds

The Rays will start inter-league play today as they take on the 3-6 Cincinnati Reds. The Reds have yet to win a series, so they're probably a bad team. Or maybe they're due. Although Kevin Kiermaier is with the Rays now, the absence of a DH makes it doubtful he'll get a start during his time here.

Here is an interactive graph of batter-pitcher matchup projections for every game of the series. The matchup projections come from a tool I made with Jason Hanselman (Dock of the Rays) that incorporates Bojan Koprivica's research on regressing platoon splits and ZiPS projections. The grey line is at an average wOBA.

Remember that these projections are wOBA (not park-neutral) so the overall marks will underrate the Rays and overrate the Reds. Matchup projections will even out a bit.

Joey Votto, a lefty, is a subllime hitter. He very well might be the best bat in the league right now. David Price is one of the toughest matchups for a lefty though, and on paper he makes Votto into a below average hitter. I'm not sure I buy that, but whatever you believe, this is a matchup worth paying attention to.

So, this is a matchup that shows just how weird the Reds offense is. They have one unbelievable lefty (Votto) and one other really good lefty (Jay Bruce), but after that there are a bunch of average to below average righties. Opposing right-handed starters will face two very dangerous moments, but should then be able to cruise through the rest of the lineup. I imagine this offense will be frustrating for Reds fans to watch when the output from their two best hitters too-often gets squandered by unproductive sequencing.

Cingrani is an interesting pitcher. He's very fastball heavy, and his fastball is really good. As you might expect from a pitcher without a deep repertoire, he's got a wide split. This could be another one of those days to give James Loney a bit of rest.

We don't know yet who's going to pitch on Sunday for the Rays. It could be Erik Bedard or Cesar Ramos, or the Rays could bump Archer up a day, which would actually put him at normal rest. If the Rays went with Archer against the Reds, that would mean Moore's replacement would take his turn during the Baltimore series, and then really could be anyone from the Durham rotation.

Everything I said in the Alex Cobb facing the Red righties holds even more true for Chris Archer. If Archer can survive the projected .451 wOBA from Joey Votto and .365 wOBA from Bruce, his plus-plus fastball/slider should cruise through the rest of the lineup.

If the starter is Archer:

Of course, the other side of starting Archer on Sunday is that someone else has to play the Orioles. They're a reasonably balanced lineup, with the best hitter being a lefty (Chris Davis), but with a higher overall expected performance against left-handed pitching. I'm really not certain who I'd rather have face them, between Cesar Ramos, Erik Bedard, Nate Karns, and Enny Romero. For what it's worth, Steamer expects Karns, a righty, to be 17% below average, and Romero, a lefty, to be 23% below average. 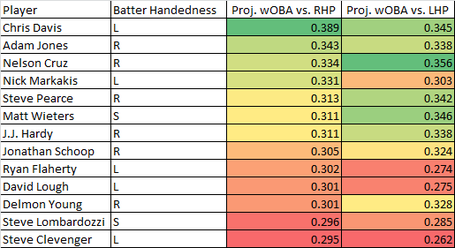 If Joe Maddon wants to leave Archer in his scheduled start, then TBD will be either Cesar Ramos or Erik Bedard. These projections are for Ramos as a reliever, so tack on a few more points of wOBA. Depending on how much you think Erik Bedard has declined, you can also tack on some runs for him, too. Neither option is ideal. Ramos has the higher expected split of the two.

If the starter is Ramos:

If the starter is Bedard: