Matt Joyce wasn't too bad, either

Share All sharing options for: Rays vs. Reds, game one preview: David Price welcomes Cincinnati to the AL East

With Cesar Ramos slated to move from the bullpen to the starting rotation on Sunday, David Price had an extra imperative: pitch deep into the game and save the bullpen for what might turn into a matchups game. He delivered in style. The Cincinnati lineup, which hasn't seen Price since 2011, clearly didn't know what to do with his fastball, which he commanded to all corners of the zone. And once they were keyed up for his fastball, Price calmly sat them down with his changeup instead. Of the 33 changeups Price threw, Reds batters whiffed at 12 of them (according to Brooks Baseball). His changeup was worth -2.39 runs alone this game by linear weights -- which you may notice is one less run than the Reds scored. Price's final line for the day comes to 114 pitches over 8.1 innings pitched. One run given up (a solo home run) on four hits, one walk, and ten strikeouts.

That's not to say that the entire game was smooth sailing for David Price. In the first inning, Brandon Phillips hit the ball long and hard to right-center, but Desmond Jennings tracked it down and made a leaping grab against the wall. In the third inning, Devin Mesoraco lead off with a double into the left-field alley, and then Zack Cozart lined the ball hard to the right of second base, but Ben Zobrist made a diving catch that almost surely saved a run. And in the fourth inning, Brandon Phillips and Joey Votto both got on base with no outs, but Price visibly upped his game and struck out the next two batters before getting a fly ball for the third out.

Let's talk about Joey Votto for a second. The handedness matchup projections I generated before the series claimed that facing Price would make Votto into a below average hitter, which is frankly difficult to believe. Let's look at how each of those at bats played out. 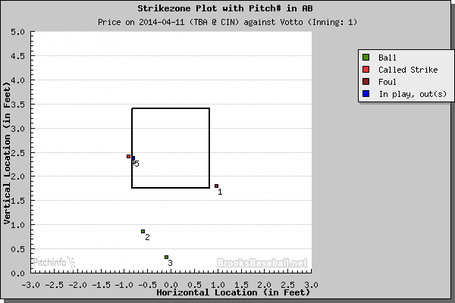 Price started Votto off with a fastball down and in. Votto began to swing, but then decided to hold up. It was a close pitch that could have gone either way, but it ended up hitting Votto's bat, so it counted as a strike. The next two pitches were low changeups that Votto took for balls. Price went back to his fastball and got a strike called on the outside edge. He replicated the pitch and drew a weak swing from Votto and a groundout to shortstop. 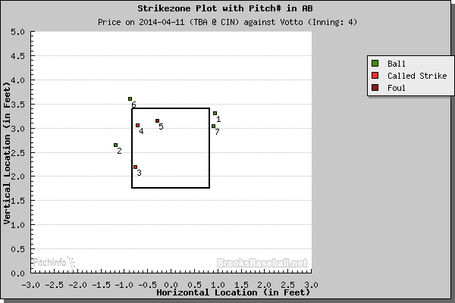 The first pitch was a fastball up and in for a ball, but close. The next was a fastball off the edge and clearly a ball. Price then pulled it in to get strike one on the outside edge. He put another fastball on the outside edge (but elevated) to even the count. Price's fifth pitch was a 95 mph fastball up in the zone that Joey Votto fought off, just trying to stay alive. Price countered by taking his next fastball higher up in the zone but Votto successfully checked his swing to bring the count full. The seventh pitch was the first changeup of the at bat, and it painted the upper inside corner. I'm not convinced it's a pitch Votto should take, but he did. There was a tight zone today, so rather than Votto being rung up, the result was a walk. Amazing discipline by Votto, but this at bat was very close to being a strikeout. 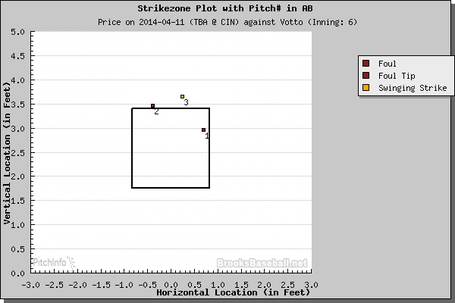 David Price definitely won this at bat, but there was something funny about it. Again he started Votto off with a fastball up and in. Votto took a big swing, but was only able to foul the pitch off. Next, Jose Molina set up low and away, but the pitch missed up, and was fouled. Once more Molina set up low and the pitch was up. Votto swung but couldn't catch up to it, and was sat down on three pitches. It was a very nice sequence, and it's fair to say that David Price overpowered Joey Votto, but it wasn't what Price and Molina were trying to do at all. In fact, the next pitch Price threw to Ryan Ludwick was also a fastball that missed its spot high, which prompted Molina to saunter out the the mound to calm his pitcher down. 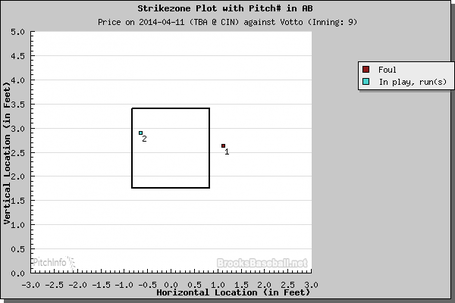 Eventually, Joey Votto got his. Price started him off the way he had all game, by busting him inside and collecting a foul ball. His next pitch was on the outside portion of the plate but elevated. It was a pitch Price had made without incident before in the game, but Joey Votto was ready for it this time. He extended his arms, gave an opposite field swing, and drove the ball out of the park. The conclusion from these sequences is very easy to draw.

I should probably mention that the Rays did score two runs. I don't think Johnny Cueto was especially sharp (he gave up nine base-runners in his seven innings, although he also struck out six Rays), but he did manage to keep the game within reach. The damage began in the first inning when Desmond Jennings, batting in the second spot, worked a walk, and then was advanced to second by Matt Joyce's walk. Evan Longoria bounced a grounder just between the shortstop and the third baseman, and Jennings, running aggressively, was able to score. Longo's grounder wasn't hit very hard, but it found the hole.

The other run came off of a hanging cutter to Matt Joyce leading off the third inning. It was hit very hard. According to the broadcast, it left Joyce's bat at 106 mph and traveled 452 feet. It was impressive.