Since 2010, Rays pitchers have thrown more changeups than any other team in baseball. It's been more of the same this year. How is that game plan working in 2014?

It's been more of the same for Rays pitchers in 2014. The changeup, which has been a staple in the repertoires of Rays hurlers has been featured early and often thus far. David Price is throwing it more than he ever has, Alex Cobb continues to use his split-change one out of every three pitches, but unfortunately it looks like it will be 4-6 weeks before he's throwing it again. Jake Odorizzi has fallen in love with his new offering. Chris Archer didn't use it his first time out, but he sprinkled it in against the Royals. I'm crossing my fingers that Matt Moore can throw a bunch more this season and that Jeremy Hellickson will also be able to contribute sooner rather than later. 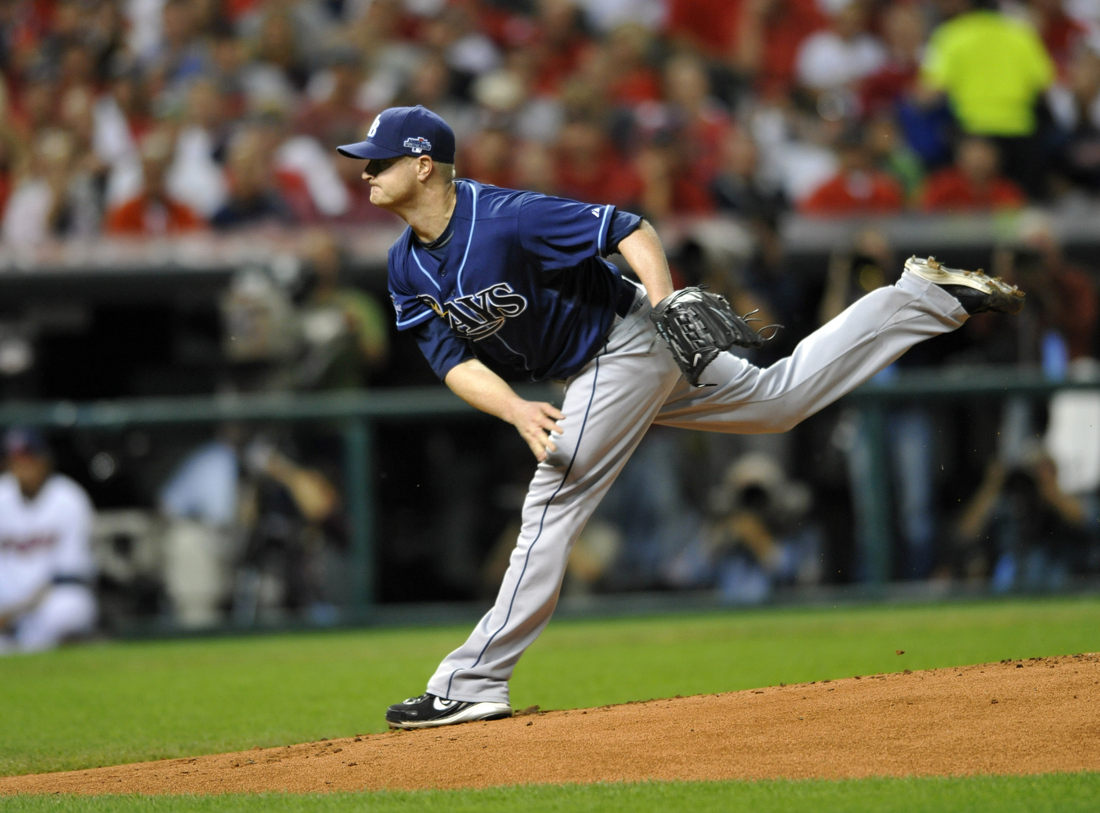 How has the changeup been working thus far for Rays pitchers? Who is throwing it the most effectively?

Price has steadily been using his changeup more and more often. Here's a look at his yearly changeup usage.

It's been steadily getting better as well.

Granted, Price is just three starts into the 2014 season, but he's throwing more two-seamers and more changeups, and thus far both pitches have been excellent. The velocity on his fastball is down from where it was at this time last year, but the improving changeup and almost complete abandonment of the walk should offset that it.

Cobb's split-change has been just as good as Price's. It's been his go-to pitch since his minor league days, and I've written plenty about it here at DraysBay. Though he tallied just 14 strikeouts in his first three starts, Cobb has a 12.2 percent swinging strike rate, and his split-change has a swinging strike rate of 23.6 percent and with 40.4 percent of swings coming up empty. Even his usually mediocre fastball was showing a little more giddyup his last time out.

Odorizzi's new split-change is now his favorite pitch. He's throwing it almost as frequently as his fastball. While two starts (one pretty good, one pretty bad) aren't much to go off of, it looks like the split-change will give him a strikeout pitch. Last year he had a problem with putting hitters away with two strikes, and if his new toy can help boost his swinging strike rate to the 8-9 percent range, he should be a decent starting pitcher (though hopefully he's not the No.3 for long).

Moore's changeup seems to be giving his elbow problems, but he can't ditch it. When he comes back, he might start throwing the change with a different grip. Whether on a per pitch basis or a per swing basis, the change is Moore's whiffiest pitch. Also, he throws it for a strike more than any of his other pitches. Though the changeup has been just fine, nothing else has looked too good about Moore in 2014, whether it's been the bevy of walks in Spring Training, or the diminishing fastball velocity. At this point he's in limbo, but his elbow has been barking for quite some time.

There's not a whole lot to say about Archer's changeup, at least not yet. He didn't use it against the Toronto Blue Jays, and he threw it only seven times against the Kansas City Royals. Four times the change was taken for a ball, and the other three times it was taken for a strike. In other news, his slider has been as nasty as ever, and to state the obvious, he throws really hard. As long as he can do that, he can be pretty good throwing just two pitches, but it would be pretty awesome if he starts throwing a good change.

In the bullpen, the split is about the only thing that has worked for Joel Peralta thus far. Heath Bell's foray into throwing a splitter has been erratic, as 11 of the 14 pitches have been out of the strike zone. Brandon Gomes befuddled Jays hitters with his splitter, while Josh Lueke wasn't so fortunate with Jose Bautista.

Notwithstanding Sunday's shellacking, the Rays pitching staff has done a fine job in the early goings of 2014, and the changeup has been a big reason why. Now if only Wil Myers could figure out how to hit a changeup...

Chris Moran is a former college baseball player and current law student at Washington University in St. Louis. He's also an assistant baseball coach at Wash U. In addition to DraysBay, he contributes to Beyond The Box Score and Gammons Daily. He went to his first baseball game at age two. Follow him on Twitter @hangingslurves