When does he lose "ace" status?

All Rays fans will by now be familiar with CC Sabathia's stuff. The movement chart looks much the same as it has in previous seasons -- four-seam, sinker, changeup, slider.

You would have to be living under a rock, though, to think that Sabathia is actually the same pitcher he's been in the past. The big lefty has lost his oomph. 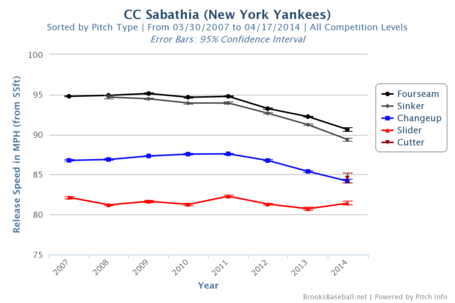 Less famously, but also probably of some import, Sabathia's slider has shown less drop to it than it had in previous years. The result has been a lot of home runs. A full 38.5% of the fly balls that Sabathia's given up have left the park, and while he's racked up strikeouts (25.9%) and avoided walks (3.7%), that level of gopheritis can turn any statline ugly. Consider these ridiculous numbers: 2.26 xFIP; 4.73 FIP; 6.63 ERA.

Now, make a prediction. On the one hand, we have a pitcher who has failed to prevent runs. Yes it's over a small sample size, but that failure is backed up by tangible and easily identifiable erosion of his skills. On the other hand, this is a pitcher with a long history of success, and while he's allowed runs, he's excelled in the aspect of the game that's most predictive over small sample sizes: strikeouts and walks.

Here's mine. I have no doubt that CC has pitched badly this season. Pitching in the major leagues is a tough job, and when you make a mistake, you get hurt. His healthy peripherals, though, mean that he still has the ability to get batters out. His equation can work, and it's just a matter of the veteran figuring out the adjustment that will make it work. I see no reason to expect him not to figure it out tonight. There's no reason to be overconfident.