The bullpen and the bats overcome an early horror show.

For the first three and a half innings, it really seemed like this was going to be just another lost game in a soon-to-be-lost season, where nothing went right for the Rays and everything went wrong. In the bottom of the first inning, Ben Zobrist hit the ball reasonably hard the other way but Brett Gardner was able to run it down on the warning track. Next, Matt Joyce smacked a grounder very hard and up the middle, but of course Derek Jeter was shifted that way, and he barely had to move on what would have been a sure hit just a few years ago (before the shift ruined the game).

In the top of the second inning, the pitching and defense failed. After two singles to lead off, Kelly Johnson grounded hard to James Loney, who went to the dirt to field. Now sitting on the infield, Loney decided to try for the middle runner at second, and threw softly and straight into the back of Yangervis Solarte. I wasn't sure that Erik Bedard would have beaten Johnson to first, so second base may have been Loney's only play, but still, it was not a good throw. Bases loaded. Next, Bedard left a curve too high in the middle of the zone. and Scott Sizemore flied it into the left-center gap. David DeJesus, tried to make a diving play, but it came off his glove and three runs scored.

On the next pitch, Ichiro Suzuki laid a bunt down the third base line, and while Evan Longoria made a good play, and while it was called an out originally, replay correctly reversed the call. Gardner hit a double play ball, hard to second base, but it got caught a bit in Zobrist's body, perhaps throwing off the timing, and some weird footwork by Yunel Escobar lead to one of the slowest turns I've ever seen from him. The speedy Gardner beat it out. Jeter grounded to third, and the Rays got the double play on their second attempt, but four runs had already scored. Four has been a nearly insurmountable number for the Rays this year.

Now trying to work out of the hole, Longoria lead off the bottom of the second with a line drive up the middle for a single. That was followed up by a Loney ground ball up the middle, but once again the Yankee defense was positioned perfectly, and the result was -- you could have guessed -- a double play. In the bottom of the third, Logan Forsythe worked a walk, But Escobar immediately erased him with another double play.

When the Rays defense got another double play opportunity in the top of the fourth, though, they botched it. Zobrist had some trouble handling the grounder, and then his throw was a little bit low. Escobar failed to catch it. For my money, both middle infielders were at fault, but the error was applied to Escobar. Erik Bedard struck out the next batter, but rather than let him face Jeter once more, Maddon pulled Bedard after 73 pitches.

Then, in the bottom of the fourth, with one out, this happened.

Don't worry. That's the low point. It gets better from here.

At this point, I was upset. Were I not supposed to write a recap, I might have turned the game off. The Rays, however, did not panic. They worked their process. For Joyce, that meant taking pitches and accepting a walk.  For Longoria, that meant pulling a hard ground ball past third base. And for Loney that meant lining an outside fastball the other way, and this time finding the gap. Two runs scored.

Brad Boxburger and Jake McGee kept the Yankees off the board until the sixth, when the Rays offense chipped into the New York lead once more. Joyce grounded an outside pitch to the left of and under the glove of Jeter, and the Rays continued their opposite field ways with a Longoria line drive single. After Loney let Kuroda off the hook by swinging at ball four, Myers pulled a ground ball past Jeter to score another, ending Kuroda's day.

All that hitting was dandy, but the Rays hadn't quite exorcized the Devil yet. Jacoby Ellsbury singled, stole second, and then scored from second on a Soriano single, to nudge the deficit back to two, and while the Rays bats continued to hit, their luck seemed to have left them. Escobar singled, but while Ryan Hanigan lined the ball hard up the middle, he hit new pitcher David Phelps in the side, and was thrown out at first.

Phelps was forced to leave the game with what I'm sure had turned into a nasty welt, and Matt Thornton entered, so Maddon called on Sean Rodriguez to hit for DeJesus. S-Rod grounded to shortstop, but Escobar had to hold up to let the grounder pass in front of him, and by the time he started running again, he was easy pickings at third base. The lead runner was erased.

Once again, though, no panic. Ben Zobrist singled, and Maddon sent in Desmond Jennings (on the bench with a mysterious ailment -- seriously, I don't know what it is; has anyone heard?) to hit for Matt Joyce. Joe Girardi swapped his pitchers for the righty Adam Warren. Now, Warren has a fairly nasty hard slider (or big cutter), so this was a tough job for for Jennings. He watched one slider nick the bottom of the zone for a strike, and then sat on that pitch. When he got the same pitch again, he went down with it, and flipped it over Jeter's head to score the run. Brandon Guyer immediately pinch ran for Jennings.

Longoria hung tough against Warren, and won himself a walk, bringing up the lefty, Loney. Warren presented him with a fastball over the middle of the plate, and Loney said "Thank you," lining over the second baseman's head to score two runs and put the Rays ahead for the first time all night.

One inning later, they would tack on, and put the game beyond doubt.

Much of the hand-wringing going into this game centered on how injury-replacement Erik Bedard would fare. He had his lively, moving fastball working. He collected a whiff on 25% the swings against his fastball, an impressive number. Bedard's curve was working too, and it was easy to squint and see the strikeout machine he once was. On the other hand, it's tough to blow major league hitters away at 89 mph, and his command of his fastball was inconsistent. Many times during the game, he would miss up and arm-side, when Hanigan was calling for the ball low and gloveside. While the vaunted Rays defense did Bedard no favors, if a few of those misses were to have caught more of the plate rather than being off or above it, defense wouldn't have been an issue. In the final accounting, I think that six hits, one walk, and three strikeouts over 3.2 innings is a reasonably fair assessment of Bedard's work last night. In his next appearance, he may perform better, or he may perform worse.

Baseball is rarely a sport of absolutes. If you think Bedard is horrible and will get shelled every time he pitches, you'll probably end up wrong. If you think he's an acceptable starting pitcher on a playoff-bound team, you'll almost surely be disappointed.  He's not going to give either of us -- the haters or the fans -- much satisfaction. Rather, he'll give us a few innings, a few too many runs, and a chance for the offense and bullpen to make something out of it. 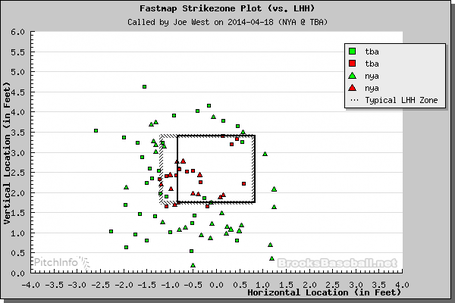