Rays fall to the Jays 4-2, but the bullpen put up four scoreless innings.

The Rays have scheduled an announcement for noon! Could it be the annual contract extension? Chris Archer, Alex Cobb, and Wil Myers all come to mind.

The first loss of the 2014 season. It’s done, it’s over with, it’s out of their systems. Alex Cobb had an off night, and the offense couldn’t get anything done against the Blue Jays’ starting pitcher, Drew Hutchison. The team was one for eleven with runners in scoring position throughout the night as the Rays fell to the Jays 4-2.

The Rays bullpen looked great last night, though! Rays’ relievers combined for four innings pitched, allowing only one hit (Ramos) and a walk (Lueke), while striking out four.

As mentioned in Erik’s recap, Heath Bell was sharp in his Rays debut. Per BrooksBaseball, Bell threw seventeen pitches, eleven for strikes, and was using his curveball primarily (nine pitches), but also mixed in his fastball and changeup (four pitches each). There wasn’t much going for Bell’s velocity, as he only reached 92.3 MPH max on his fastball. Bell did manage to induce two groundouts and a flyout to first base against the three batters he faced. 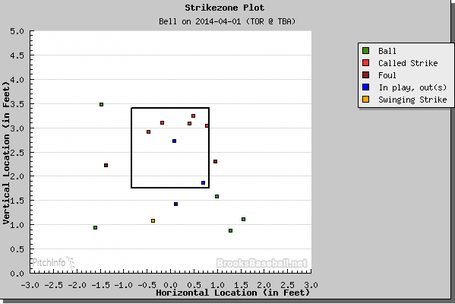 For your webgem viewing pleasure, here’s Longoria making the play of the night to rob the Melkman of a hit.

The play was one of two reviewed of the night and the players had no idea what to do while it was being reviewed since it was the third out of the inning.

#Rays players not sure what to do; umps waved them back out of dugout but they were just milling about.

Tonight, Matt Moore takes the mound against Mark Buehrle at 7:10 PM for game three of the series.

Kim DeJesus tried pulling off an April Fools Day joke yesterday, and if you weren’t paying attention to why David wasn’t in the lineup, or what day it was, you may have believed her for a split second.

Wow that was a short run in Tampa! Dave just got traded to the Dodgers">@Dodgers ... thankfully I can show him where all the juice bars are here

The Durham Bulls had their photo day yesterday and posted a behind the scenes vine of some of their players.

The Bulls starting rotation was announced yesterday and it will be Karns, Romero, Andriese, Montgomery and Erik Bedard, per @TBTimes_Rays.

Sean-Rod and Heath Bell, along with Raymond, visited the twelve lucky babies who were born on March 31st at Bayfront. Their families will all be receiving four rays tickets to each future Rays opening day as part of the Rays promotion with Bayfront. So awesome!

- From MiLB.com, a look at some of the Rays prospects to keep an eye on.

- It was announced yesterday that Clayton Kershaw will begin a 2-3 week rehab regimen before being re-examined by the Dodgers to determine a timetable for his return. Jonathan Bernhardt of Sports on Earth takes a look at some injuries from the spring that will be hurting teams the most.

- Spring Training attendance for all of MLB was up 7.3% in 2014 from the previous year.

- After losing Bobby Parnell to an elbow injury, the Mets signed our old friend Kyle Farnsworth.

-The Red Sox met with President Obama yesterday and Jonny Gomes had quite the outfit (if you haven’t already seen it, not sure how you could miss it, but JONNY GOMES)

I leave you with this picture of Maddon deep in thought, per @WillVrag of the Tampa Bay Times.