Share All sharing options for: Matt Joyce, lead off hitter

With David DeJesus nursing a bruised foot after a hit by pitch in the opening game, Matt Joyce got bumped up to lead off in last night's line up. That's not such a bad idea.

Lead off hitters tend to face a lot of fastballs*, the very category of pitch Matt Joyce excels against:

This is even more evident against the fourseam variety:

And for the visual learner, here's Joyce in his career against hard pitches: 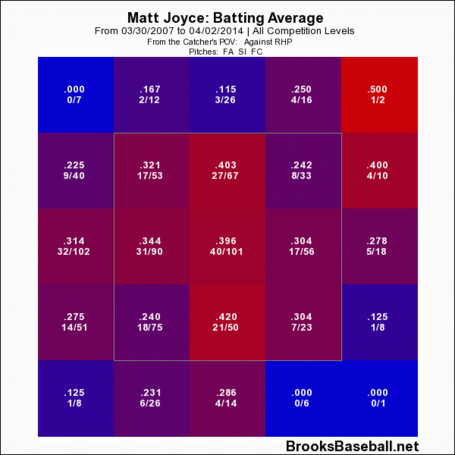 And here's his career heat map against breaking and offspeed pitches: 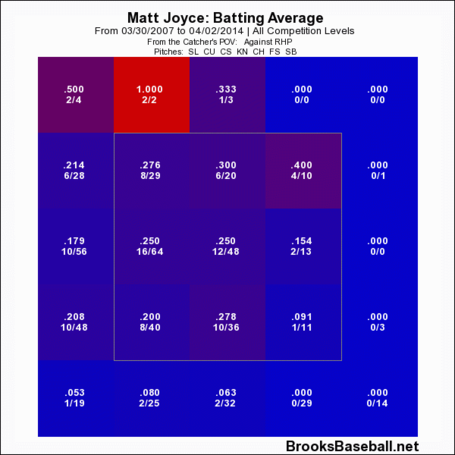 He'll get after it well enough high in the zone, and over the middle, but that's just doing your job.

Fastball smacking has long been the go-to reason to bat possibly frustrating players at the top of the order (Yasiel Puig, for example). Joyce can be hot and cold. Why not harness the best of his ability by batting him where his is more likely to succeed?

The other uber-important attribute needed at the top of the order? Joyce has plenty of speed too. Since 2011, he's notched the second highest BsR for the Rays, trailing only Desmond Jennings. (Neither Joyce or DeJesus is expected to swipe more than ten bags a season, if you're worried about the box score.)

Also in Joyce's favor: When I looked into the batting order last week, I was impressed by how favorably our ZiPS regression considered his upcoming season. Joyce was projected to have the second-highest wOBA vs RHP at .343, just four points shy of Longoria.

At the time, I suggested the Rays bat Joyce second in the order against righties, but in the first two games that slot has belonged to Myers. In that case, why not bump Joyce into lead off? Besides, I'm overjoyed every time the lineup card reads Joyce-Myers.

We won't see him in lead off tonight, with southpaw Mark Buehrle on the mound, but the Rays will have decision to make if DeJesus is healthy by Thursday for Brandon Morrow.

*batting slots 1, 2, and 9 tend to face nearly two-thirds fastballs, which is advantageous when fastball use has been steadily decreasing over the past decade.