Tampa Bay is a baseball town

And here's the data to prove it.

Share All sharing options for: Tampa Bay is a baseball town

While attendance is, as always, a topic of conversation for the Rays this season (21,869 per game, according to Tampa Bay Baseball Market), I don't think there's anyone here who would contend that the Ray aren't popular within the Tampa Bay area. Andrew Powell-Morse just published on some interesting and nicely-visualized data that helps back that up. Powell-Morse looked at Google search statistics, and categorized athletes by the number of times they were searched for each month globally, their team, their league, their position, and their state of residence.

You won't find much on the Rays in his article, but he shared his data as a downloadable excel file, and invited everyone to slice it for themselves. Here's what I've come up so far.

The top of the Florida list is dominated by Miami Heat players. Also up high, is Teddy Bridgewater (a presumed top NFL draft pick, for those who really do live under a baseball rock) who currently lives in Miami, Victor Oladipo, the Orlando Magic's budding star, and Mike Wallace, the MIami receiver. Next in Florida? David Price.

Clearly some of this has to do with whether or not there is news about the player, and not just with their popularity, so take it how you will.

Next, I compared the number of google searches for players on each team in the AL East to the searches for teams from other sports in the same area. For cities with multiple teams, I combined them, so the total here for New York baseball is the Yankees and the Mets combined. 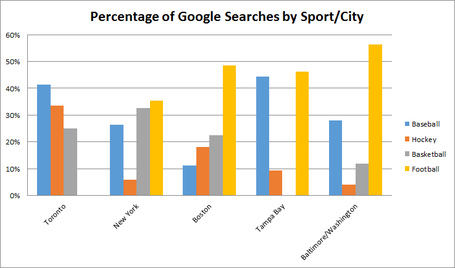 Be aware that I have apples and oranges here. Some cities have four sports, some only have three, so don't compare cities directly to each other. Rather, compare the relationship between two sports.

This is just the tip of what you could do with this data. Thanks a bunch for Powell-Morse for collecting and organizing it into a very usable format. Take a gander at it yourself, and drop it either in the comments or in a fanpost if you do something interesting.