And also in Tallahassee.

Share All sharing options for: The Tampa Bay Rays are the most popular baseball team in Tampa Bay

The interactive mapmakers at the New York Times do consistently great work, and their latest creation focuses on baseball. They took Facebook likes by baseball team and portrayed them as a percentage of the total team likes in each county and, drilling down even further, zip code. 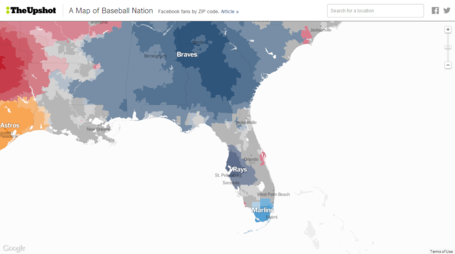 It's a map you should probably spend the next couple hours exploring for yourself, but let me give you some highlights:

All joking aside, The Trop does seem to fill up with Yankee and Red Sox fans when those teams come to town, so I wondered how the Rays 56% fandom rate compared to other major league clubs. Here is a list for each team with the number from the county in which their current stadium is located.

Unsurprisingly, the Best Fans In Baseball top the list. That's why they're The Best Fans In Baseball. The Rays rank 18 of 29 (Toronoto is not included in this list). That's on the low side of the middle of the list, but not actually at the bottom, and it seems to indicate that while, yes, attendance is low, it's not low because there are no Rays fans in the Tampa Bay area. Anyone looking to write about Rays attendance will need to look deeper (I'm confident that most national writers won't).

Of course, I'm sure there are other conclusions one could and should draw from this. I'd be happy to hear them. There's also some question of whether Facebook likes is a good way of measuring the fan base of a team. You're all Rays fans here, do you like them on Facebook?

There is no question, however, that liking DRaysBay on Facebook is an excellent way to be a fan of the team, and would be an awesome representation of said fandom.