Rays 6, White Sox 9: Leaving Men On Base and Losing on a Walk-Off Grand Slam

The Rays fall to the White Sox 9-6 in the bottom of the ninth inning off the bat of a Jose Abreu grand slam.

Share All sharing options for: Rays 6, White Sox 9: Leaving Men On Base and Losing on a Walk-Off Grand Slam

In game one of this four game series, we saw Chris Archer take the mound against Erik Johnson of the White Sox as the Rays lost 9-6 on a walk off grand slam off the bat of Jose Abreu. While Johnson only lasted 1.2 innings, Archer would go six, throwing 101 pitches and allowing nine hits and four earned runs, while striking out four with no walks given up. For a majority of the game, the Rays and White Sox maintained a 4-4 score, up until Evan Longoria homered in the top of the ninth. Balfour loaded the bases and blew the save in the bottom of the ninth for the Rays.

Ben Zobrist started out the game for the Rays by working a full count and then grounding out to White Sox first baseman Jose Abreu. Desmond Jennings followed by grounding out to shortstop Alexei Ramirez. In the third spot in tonight’s lineup, Matt Joyce walked to give the Rays their first baserunner. Evan Longoria, batting cleanup tonight, quickly fell behind 0-2, worked the count to 3-2, but Joyce got caught stealing by a mile, so Longo will lead off the second inning for the Rays.

Chris Archer opened the bottom of the first by allowing a lead-off single to Adam Eaton. According to MLB.com’s Gameday, Archer didn’t stick to the scouting report by throwing him a two-seam fastball in that location. Womp womp womp. 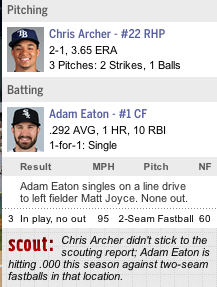 Archer followed up by striking out Marcus Semien, while Eaton stole second. Jose Abreu was up next and hit a first-pitch slider to left-center for a single, scoring Eaton as the White Sox took a 1-0 lead. Adam Dunn went down swinging for the second out. The inning ended with Dayan Viciedo grounding out to Zobrist.

Longo started off the inning swinging at the first pitch and singling to right field. Johnson’s first pitch to Loney was around the ankles and got away from the catcher, which allowed Evan to advance to second. James Loney popped up the fifth pitch of his at-bat to Ramirez in shallow left-centerfield, as Longoria remained on second. Wil Myers then struck out on three straight pitches. David DeJesus walked to give the Rays runners on first and second with two outs to bring Escobar to the plate. Yunel singled to left field, scoring Longoria and moving DeJesus to second, while tying the game up 1-1. Hanigan followed suit with a single to left field, and the Rays once again tested the weak arm of De Aza, as DeJesus scored, giving the Rays a 2-1 lead. Zobrist then took an 0-1 fastball and lined it to right field for a double, scoring Escobar and moving Hanigan to third to put the Rays up 3-1. Jennings took a walk, loading the bases for Matt Joyce. The White Sox bullpen begins to warm as Johnson is nearing 60 pitches through the first two innings. Joyce worked an eight-pitch at bat, walking to score Hanigan and Robin Ventura pulled Erik Johnson immediately afterwards, with Longoria coming up to the plate. Jake Petricka took over for the White Sox and got Longoria to ground out to the short stop on the first pitch, stranding three baserunners. Productive inning for the Rays as they batted around and took a 4-1 lead.

Archer gave up another lead-off single in the bottom of the second. De Aza then flew out to center and Tyler Flowers grounded out to second based. Gordon Beckham ended the inning by popping up to Zobrist, stranding the baserunner.

Loney started off the inning with a walk, the fifth of the game for White Sox pitchers. Myers followed suit with a walk of his own, to give the Rays runners on first and second with DeJesus at the plate. DeJesus hit a soft liner to second baseman, Beckham, and luckily the runners stayed close to the bags, avoiding a double play. Escobar had some terrible swings and struck out, while Hanigan ended the inning by grounding out to Beckham.

Archer started the third at 33 pitches, and struck out the first batter, Adam Eaton, on a 96 MPH fastball over the plate.  He then froze Semien with another 96 MPH fastball for the second strikeout of the inning. Unfortunately, Archer left a breaking ball over the plate for Jose Abreu who hit a towering homerun to dead center, cutting the Rays lead to two. The ball came off Abreu’s bat at 100.3 MPH according to the Sunsports broadcast. Adam Dunn ended the inning with a groundout, so the Rays remain up 4-2.

No leadoff man aboard this inning for the Rays as Zobrist struck out swinging. Desmond Jennings then saw eight pitches in his at-bat and singled back up the middle. Jennings would steal a base off a wild pitch to Matt Joyce, who wound up walking. Evan Longoria chased a fastball and grounded into a double play to end the threat and the inning.

The White Sox began the inning by loading the bases against Archer on three straight singles. Tyler Flowers then singled up the middle on the first pitch, scoring two to tie the game. Four straight pitches, four straight hits given up. Beckham then hit a long fly ball to right field, with Wil Myers catching it right at the wall for the first out of the inning. Adam Eaton then hit a little comebacker to Archer who started an unconventional double play (1-5-2-4-6), first catching De Aza between home and third, and then nabbing Flowers between second and third to end the inning. Phew, no further damage.

James Loney singled to center to start the inning. Myers could not advance him, as he hit a soft fly ball into left-center for the first out. DeJesus singled under the glove of Jose Abreu, with Loney going from first to third on the play. Ventura removed Petricka from the game after going 2.2 innings. He was replaced by Zach Putnam. The fans in the stands seem to be more interested in the wave at this point as opposed to what’s happening on the field. Putnam walked the first batter he faced, Yunel Escobar, which loaded the bases for Ryan Hanigan. Hanigan chopped the first pitch he saw and the White Sox turn a 5-2-3 double play to end the inning and end the Rays threat. Roger Mooney mentioned via Twitter that at this point through the game, the Rays have had eight walks on the night and only one of those has scored.

In the first 1-2-3 inning of the game, Archer needed just nine pitches to get through Semien, Abreu and Dunn. Semien and Dunn grounded out, while Abreu flew out to shallow center.

To lead off the inning, Zobrist hit a soft grounder and hustled down the line to beat out Ramirez’s throw. Jennings hit a chopper to third base, and Semien threw to second to get the force out for the first out of the inning. In Joyce’s fourth at bat of the game, he drew his fourth walk of the game, moving Jennings over to second with Longoria coming to the plate. Evan struck out on a ball in the dirt in the third pitch of the at-bat. Loney strands the runners, yet again, with a fly ball to left field. Up to this point, the Rays have left ten men on base.

The White Sox went down 1-2-3 again in the bottom of the six, but some extended at bats raised Archer’s pitch count to 96.

Once again, the Rays leadoff man gets on base as Wil Myers lined a ball past a diving Alexei Ramirez into left-center. DeJesus followed by grounding into a double play and then Escobar flew out to centerfield. So, no stranded base-runners that inning for the Rays.

Archer started the seventh for the Rays, with Jake McGee warming in the bullpen. He started off 0-2 against Tyler Flowers, but the White Sox catcher worked his way back into the count 2-2 and then doubled to right center. Joe Maddon would remove Archer from the game at 101 pitches. McGee came right into the game, fastballs a blazing, throwing four straight at 96 MPH to Gordon Beckham and getting him to pop out softly to Zobrist on the fourth pitch. McGee dialed in a little more, throwing 98 MPH heaters to Adam Eaton before Eaton grounded out to short, advancing the runner to third. To end the inning, McGee struck out Semien swinging on a 98 MPH fastball.

The White Sox brought in their fourth pitcher of the game, Ronald Belisario, who managed a 1-2-3 inning, with a liner and two ground outs all going to Gordon Beckham off the bats of Hanigan, Zobrist and Jennings.

After a solid inning of work from McGee, the Rays put Joel Peralta in for the eighth. Although I definitely would not have been opposed to Peralta walking Jose Abreu, Joel sat Abreu down with an 82 MPH splitter. Adam Dunn managed to hit a check-swing bloop into left field, but Dayan Viciedo grounded into a double play on the first pitch of his at-bat, ending the inning and keeping the score tied at four a piece heading into the ninth.

The White Sox bring in their closer, Matt Lindstrom, to start the ninth. Matt Joyce, who was still 0-0 on the night with his four walks, drew a fifth walk, which is a Rays club record. You can put it in the board….YES! Evan Longoria with a two-run homerun to dead-center to give the Rays a 6-4 lead!

Loney and Myers followed with strikeouts, and like Kanye sang, DeJesus walks. Escobar would strike out to end the inning, but the damage had been done. The Rays took a two-run lead.

Grant Balfour entered the game for the Rays to close the game out. Alexei Ramirez led off for the White Sox, popping up the second pitch of the at-bat to center field. De Aza would try and get something started for Chicago as he doubled to the gap in left-center. For the first time tonight, a White Sox batter would walk as Tyler Flowers saw five sliders from Balfour, all of which were down and away. Now, the White Sox had men at first and second, and Paul Konerko entered the game, pinch hitting for Gordon Beckham. Balfour would get a full count on Konerko, but threw ball four a tad bit high in the zone to walk Konerko. Apparently Paulie didn’t like the pitch, as he and Balfour exchanged words while walking to first. Adam Eaton would ground into a force out and barely beat the throw to first, also scoring a run so that brings it to a one-run ballgame. Maddon would challenge the play at first, and why not? You can’t carry over challenges, so might as well use it just to make sure that Eaton did in fact beat the throw. The call was confirmed after a review. Marcus Semien would walk for the White Sox to load the bases again with two outs. Jose Abreu stepped to the plate for Chicago, and promptly hit a grand slam into the right field bullpen. So, the White Sox walk it off with a 9-6 win as Balfour blows his first save of the season.

Tomorrow, or rather later today, the Rays send Cesar Ramos to the mound to face John Danks of the White Sox. That game will be at 7:10 PM ET.