State of the Rays: Approaching Oblivion

Share All sharing options for: State of the Rays: Approaching Oblivion

There is much I want to say and more, particularly after missing the last week on vacation, but let me start here:

The Rays stand with an 11-15 record, four games below break even and last in the division. The Yankees lead with a 15-10 record and will welcome the Rays to New York this weekend, but not before the Rays face the fourth place team, Boston (12-14).

The entire division is separated by less than five wins after ~25 games played, and the entire division is still projected as a coin flip toward the playoffs; that is to say, around 50% odds of making the postseason. It's still wide open, but only one of these teams is treading water while in a crisis of depth. 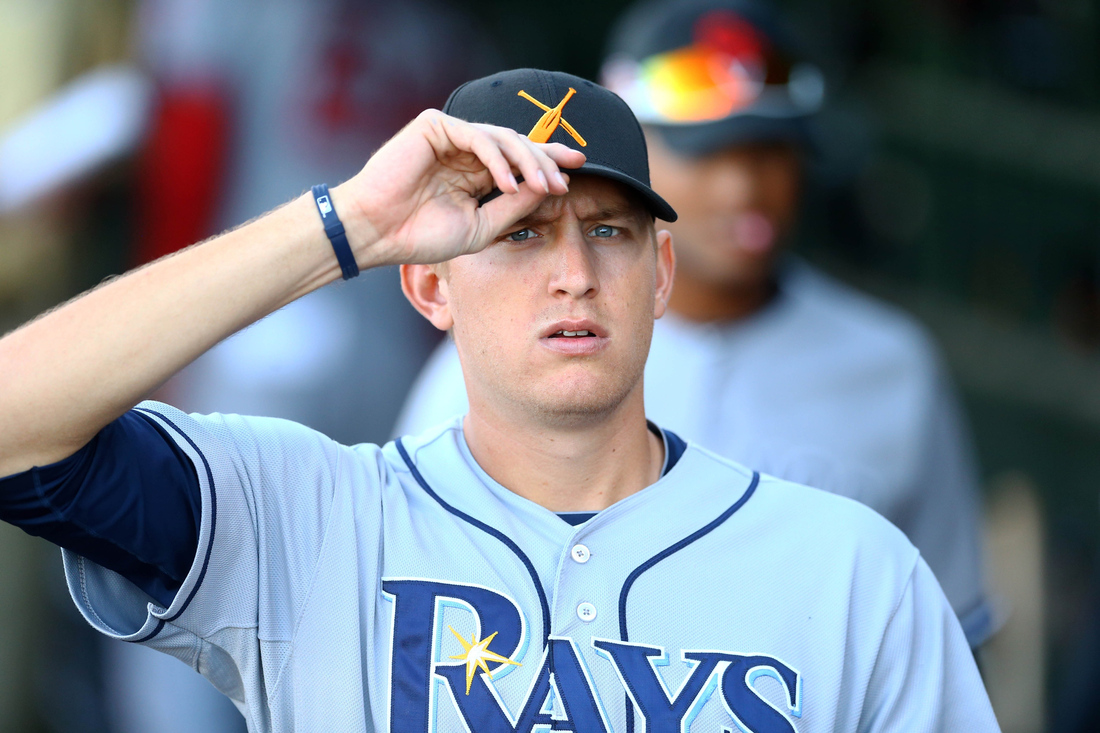 State of the Rotation

Tampa Bay started the off-season with the expectation of trading front line starter David Price, but the team never found a deal they liked and held on to the growing salary of their ace. Shortly thereafter, the Rays lost four pitchers on the depth chart: Jeremy Hellickson (loose bodies in the elbow), Alex Cobb (strained oblique while batting in NL game), Matt Moore (Tommy John surgery), and Alex Colome (50 game suspension during elbow recovery).

Now the Rays are faced with starting what was likely the 5th, 7th, and 8th starters on the depth chart in Jake Odorizzi, Cesar Ramos, and Erik Bedard. Following from there would be rookie starters still marinating in the minors: Nate Karns, Enny Romero, Matt Andriese, Mike Montgomery, and Merrill Kelly.

The first two mentioned are considered top prospects in the system and have experience at the major league level, but the Rays choice to hold them down in a situation like this is indicative of their progress in development, likely due to their deliveries (one rigid, the other wild). Matt Andriese is a groundball specialist with much to prove.

Mike Montgomery is a wildcard who recently pitched all but two outs of a no-hitter, but has seen his prospect ranking drop off the board twice in his minor league career, and Merrill Kelly is another rigid starter not expected to succeed above Triple-A. I mention Merrill because there aren't many names the Rays could vault from Double-A either.

Should the Rays promote Montgomery? He's been the most consistent starter in Triple-A through five turns in the rotation, and earned unsolicited praise from Jim Hickey during spring training, but bringing him up now could just ruin everything. He's gone from top-5 prospect, to blue chip trade piece, to probable reliever, and now back to solid starter when no one was looking? I don't buy it just yet, or if he's finally putting his mechanics together I'm not sure facing MLB hitters would help just yet, but if he continues to show he can hold his own we might be approaching a "why not" situation.

The scouting report on Montgomery is simple enough, and was confirmed by Bernie Pleskoff this winter:

Of the three pitches I saw Montgomery throw, I felt his fastball was average in movement and efficiency, the curve had nice tilt and deceptive movement, and the changeup was a plus pitch. The changeup did what was intended. It consistently changed the balance and eye level of the hitters.

Montgomery effectively kept the ball away from hitters. It will help if he busts some pitches inside, but working away was his general game plan

Montgomery has had a barking shoulder at times, and it's something he has monitor. There were times when Montgomery looked very comfortable and in rhythm on the mound in the AFL. Other times, it looked as if he was struggling to find a consistent release point and arm slot.

If Montgomery can keep the ball low in the zone, he will be most effective. With his height -- and pitching downhill -- he can induce groundouts by keeping the ball down. I saw him do that with good results.

Montgomery has upside and a bright future as either a starting pitcher or a situational or late-inning reliever. I project him as a starter. Montgomery has the repertoire, the mound presence and fairly efficient mechanics to give his team innings from the rotation.

Smart use of the change and curve is enough to get by at the major league level, and if his command has improved then ground balls should follow in a well-called game. Sure enough, through his five games thus far, Montgomery has a 50% GB-rate (up five percent) and a sparkling 26.4% K-rate (up nearly ten percent). It's hard to know much more or what is sustainable. When I saw Montgomery pitch in the AFL he looked horrible, but as Pleskoff notes, Monty would fluctuate from good to bad. I saw the bad. In Durham he's shown the good. What's real?

Alex Cobb is still a month away from joining the Rays and currently throwing at 90 feet, and Hellickson recently had his first session on the mound but is eyeing a return in early June. Their replacements have yet to pitch into the fifth inning.

The Rays need one more month of Bedard and Ramos to hold up, and the bigger question mark there is Bedard. I'll have more on him later today, but with his innings limit lifted, he'll have tonight to prove he can command the strike zone this time around. If he doesn't, I wouldn't mind seeing a few minor league arms getting the nod. With Ramos I'm comfortable with the Rays sending him out there through May, but Bedard is less of a solid bet. 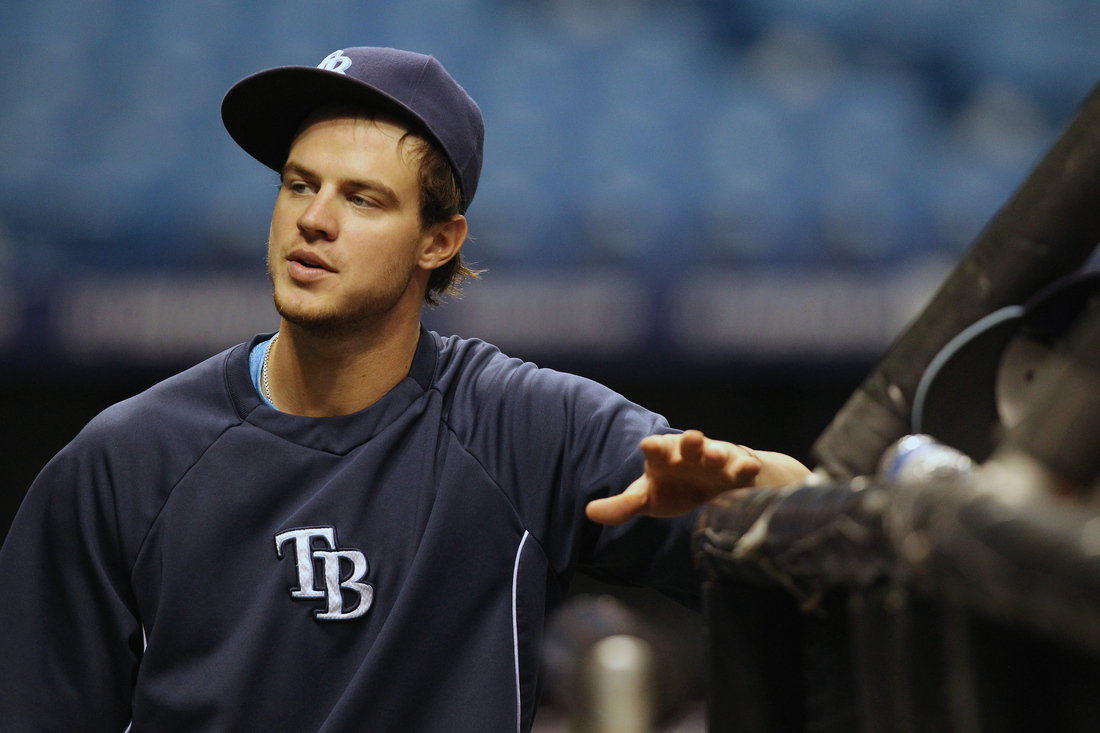 State of the Offense

For wOBA performances, turn to Dock of the Rays, where we see Matt Joyce has been tearing the cover off the ball, with Loney and Hanigan also exceeding expectations. Follow the link, Jason's quality of analysis is a primary influence on who I am today as a writer and thinker, and the article is worth your time if you're interested in comparing your feelings on the offensive performances thus far to what expectations are for those players.

Overall the Rays rank fourth in WAR for positional players at 5.3, the second best mark in the American League, trailing the Angels with a decent mix of offense and defense. The Rays had a surge of errors in Chicago this week, but that was uncharacteristic for an otherwise solid field.

The outfield is an a strange place, as Matt Joyce* has taken the field while David DeJesus has been hitting from DH due to a sore shoulder after an awkward crash on April 18th. In this situation it helps that Joyce is an adequate defender. DeJesus may return in Fenway, thanks to the limited grass in left field and the expectation of shorter throws, but why push it?

*Currently with the third highest OBP in baseball.

Meanwhile, we recently learned that Wil Myers was battling his own sore shoulder last season, which explains why he was so hesitant to make throws from the outfield. He recently unleashed a throw that would have had a runner dead to rights at second base, had Yunel Escobar not dropped the throw, and I was floored. Myers is a converted catcher and I've always presumed he would have a great arm if the Rays let him air it out. We're starting to see that this season. 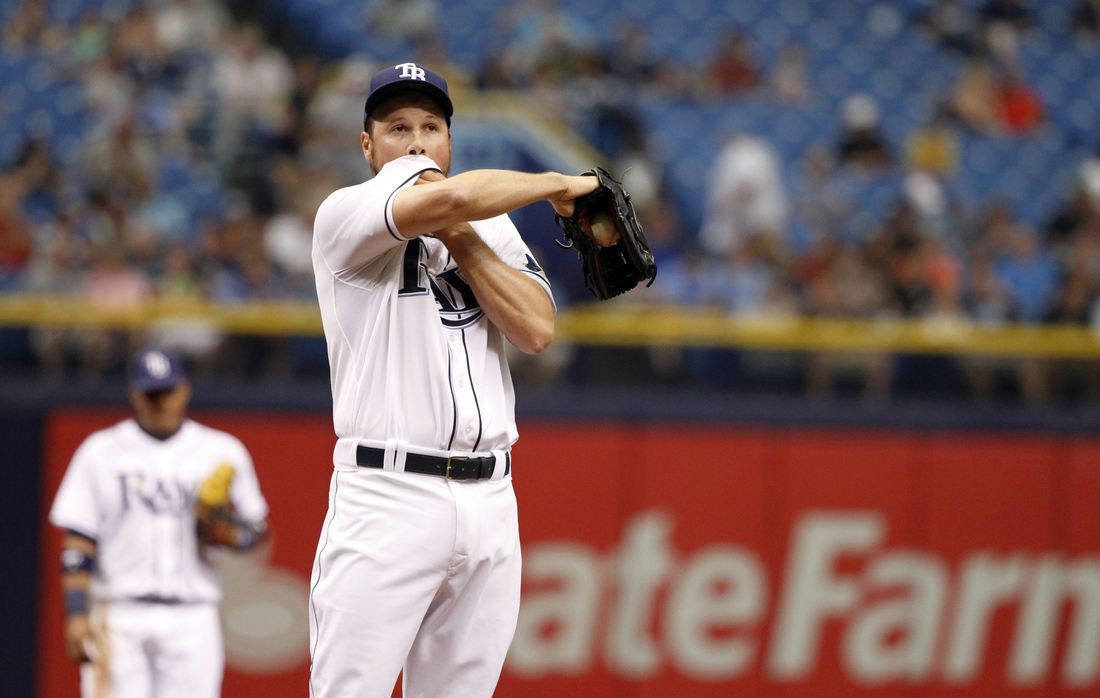 Beyond the Box Score had a great read on playoff odds based on early records, between 20 and 60 games played, but I would encourage that this barely applies to this year's AL East.

Tampa Bay, Boston, and New York each have 40% or better odds to make the playoffs, according to Baseball Prospectus's current percentage standings, with all three teams between 30-50% on making the divisional round. From there, the Rays and Red Sox have 5% odds of the World Series, and the Yankees a 6.5% -- though that may nor properly reflect Ivan Nova's recent Tommy John surgery assignment.

The Rays have lost 12% in the standings to New York over the past week thanks to the current losing streak, but this week could change everything.

Here are the expected match ups over the next six games:

Jason from Dock of the Rays ran quick wOBA projections on the match ups and found advantages toward the Rays in the first, second, and fourth start listed, with close results for Odorizzi and Bedard in starts five and six. Meanwhile, Ramos remains a strong candidate to stare down lefties, which Boston has plenty of.

All of that is to say, the coming week will test the Rays endurance after some difficult and high-scoring losses, but are each winnable games. If the Rays can take four of these games, the division race is even slimmer than the current 4.5 game spread, and easily obtainable. However, surviving a chilly and rainy road trip through New England is no easy task.