An exercise in projecting without data.

The Texas Rangers come to St. Petersburg today after losing a wild home opener to the Phillies, and then managing two consecutive walkoff wins. The Texas rotation has been battered by injuries in the Spring, so the Rays will get to face Nick Martinez, who should probably be starting the year in double-A. On the other hand, Yu Darvish will make it back for the third game of the series.

Here is an interactive graph of batter-pitcher matchup projections for every game of the series. The matchup projections come from a tool I made with Jason Hanselman (Dock of the Rays) that incorporates Bojan Koprivica's research on regressing platoon splits and ZiPS projections. The grey line is at an average wOBA.

Remember that these projections are wOBA (not park-neutral)* so the overall marks will underrate the Rays and overrate the Rangers. Matchup projections will even out a bit.

*Note to self: Ian, you really should start adjusting them, rather than saying this every time. 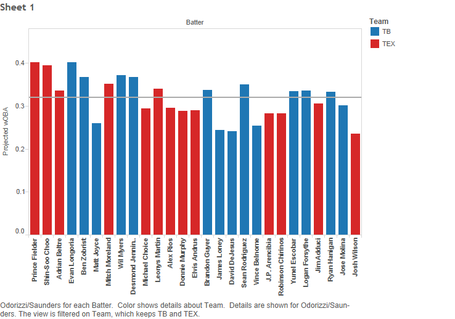 Saunders, despite being a starting pitcher, has a pretty big left-handed split. It's lucky for the Rays that Sean Rodriguez's baby was born yesterday and that he's back today. This is a game that David DeJesus and Matt Joyce should sit, and that two of S-Rod, Brandon Guyer, and Logan Forsythe should play (or all three, if Maddon feels like giving James Loney a break). 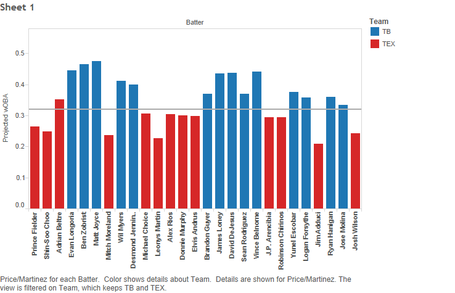 Okay, this game should be fun. The two best (and three of the four/four of the five best) Texas hitters are lefties, and David Price is very tough on lefties. On the other side is Nick Martinez. Now, understand that I'm not saying anything bad about Martinez. He may turn out to be an excellent pitcher, but he's not a guy who would be anywhere near the major leagues right now under normal circumstances. The 23-year old has only pitched 32 innings in double-A.

Let me explain how I arrived at the matchup projections for Martinez, because there's a lot of assuming going on. First off, I know nothing about his split tendencies, so I assigned him an average right-handed split. Now normally, the pitcher wOBA projections in this tool come from taking career numbers and regressing them against a league average, but in this case that would be clearly wrong. It would call Martinez a league-average major league pitcher, which he is obviously not (he's a minor-league pitcher being rushed to the majors because of multiple injuries in front of him). Instead, I used his Steamer FIP projection, which projects him to be 35% worse than the major league average.

Note: The Oliver projection system thinks he'll only be 8% worse than average. I chose Steamer because it's more fun to look at. Oliver evaluates the strength of a level compared directly to the major leagues, but no one ever moves from A-ball straight to the majors (or if they do, they're likely a very special case). The point is that neither projection system knows much of anything about the young Texas righty, so find your shaker of salt.

The other point is that with David Price pitching, the Rays should be ashamed if they don't win on Saturday. 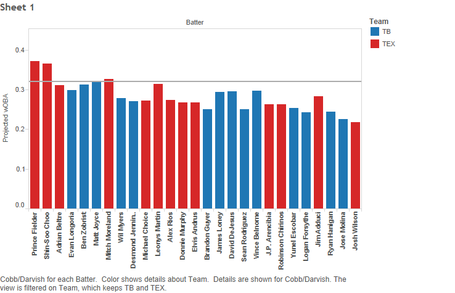 Sometimes you get to face Nick Martin, and sometimes Yu Darvish comes back from injury just in time for the last game of your series. These things can't always be avoided. Hope for a good game from Cobb.