Nick Martinez, a 23-year old with just 32 innings in double-A, will start today against David Price and the Rays. I've already covered in the series preview just how much of a mismatch this probably is. I've also covered just how little the projection systems know about him. Let me add to that: I also know very little about him. Martinez was mostly a shortstop in college, but Baseball America and Baseball Prospectus scouting reports both praise his pitchability. He can throw a low-90s fastball, a slider, and a changeup. The changeup is a newer offering for Martinez. Apparently he gets groundballs.

If you want to know more, you should read what our counterparts in Texas had to say about him.

I can give you a graph, since Brooks Baseball has charted six of his pitches. 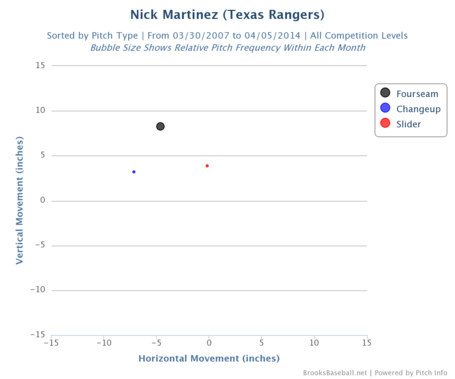