Erik Bedard and the changeup

An odd twist on traditional usage.

Share All sharing options for: Erik Bedard and the changeup

What I liked about Erik Bedard prior to his signing by the Rays was his ability to pitch well against hitters on both sides of the plate, and his ability to shift between the bullpen and rotation.

After placing seventh on the depth chart and starting the year in the triple-A rotation, Bedard earned a few chances in the rotation due to injuries to Matt Moore (Tommy John surgery) and Alex Cobb (strained oblique while batting in NL game). Through two starts, among three appearances, Bedard had allowed nine runs (eight earned), less than one run per inning. His ERA was an ugly 7.45, but his FIP was a better than expected 4.01. The Rays held on to him when many thought he might be cut, and now his starting has come around to being effective one again.

The main reason for that success, I believe, is his ability to keep hitters off balance by dealing heavily in pitches below 75 MPH -- and it's not a knuckle.

Bedard's first appearance with the Rays came in Cincinnati: two innings of relief, allowing three base runners and striking out none of the nine batters he faced. Here was our first exposure to his 73 MPH change up. Bedard's change started at 79 last season and dipped to the current levels of velocity in August of 2013. I remember noticing it during the off-season, but I can't say I was expecting that to be the new norm. The pitch is actually slower than his curve. That's unique.

Ten pitchers have thrown thirty or more changeups at a max of 75 MPH since the start of last season, including Anibal Sanchez, Bruce Chen, and Bronson Arroyo; however, only four of those pitchers really seem to be doing so on purpose: Barry Zito (186 pitches), Wade LeBlanc (92), current Cardinals reliever Pat Neshek (44), and Erik Bedard (191). 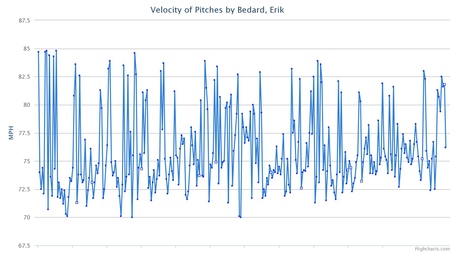 However, here is the problem with that chart. I believe that Bedard has thrown only four change ups above 77 MPH in a Rays uniform, and that's because it's nearly impossible to find the line between what is a fastball and what is a change once the velocity creeps down below 85.

While surveying the market for a fifth starter in the off-season, I noted a few warning signs for Bedard: strange pitch selection, and an increasing flyball rate. I believed that Bedard was fastball-happy prior to his signing, and that seems confirmed with a 45:26% use of four/two seam fastballs against same handed pitching, and 26:26% use against righties. That's a lot of fastballs, and not far from last year's trend.

Contrasting with Bedard's fastball-heavy style, though, is an increased use of the change. If I'd told you prior to this conversation (without saying who I was talking about) that the Rays had a pitcher with 15 MPH separation from fastball to change, you'd be far more interested. The change movement mirrors his two-seam well, if only Bedard were consistent.

Often times the change is flat, which can lead to no movement and bad results, but when it's on it looks just like... wait a second... both of his fastballs?

For example, take Bedard's start against the Yankees on April 18:

Here we have a few changes mimicking the two-seam, a few mimicking the four-seam, and a few that just died. Ladies and gentlemen, your Rays' fifth starter. Those same purported change up movements in list form, as reported by MLBAM:

And you know what else? The camera at the Trop isn't exactly consistent either. Brooks Baseball adjusts the horizontal movement recorded on the camera by 3.2 inches. Regardless, we see three kinds of change ups above: Those mirroring two-seam movement, those mirroring four-seam, and a clump that died toward the middle of the chart.

The velocity and the movement is deceptive for analysis. The range in velocity around 80 MPH is a grey area. Everything below seems meant to be a change, everything above a fastball, and that's with either a two- or four-seam grip. From a practical standpoint, this means that even if the batter can read the velocity there's an added level of unpredictability based off the movement.

For a southpaw, the change is usually thrown against righties, where it's movement will tail away from the batter. Looking into Bedard's use of "changeups" between 70-79 MPH, we see that Bedard's approach is fairly typical.

There were 176 instances of a change in that velocity bracket to a right handed batter by Bedard since July 1, and the distribution is normal. You would expect the pitches to tail away from the batter, or be used to steal a strike on the inside edge. 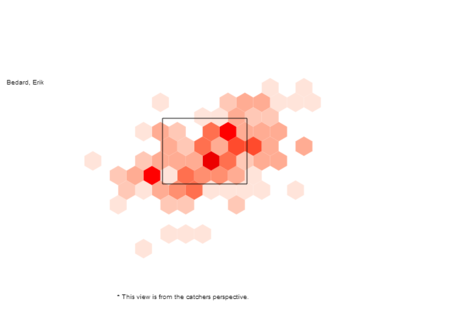 His distribution of results for changes vRHB shows only seven hits and 26 whiffs, fairly effective. Of those changes inside to righties, only one in the sample fell for a hit, a single by Oswaldo Arcia that snuck past the first baseman Brett Wallace in 2013.

If Bedard were to use one of his changes on a lefty, it would presumably be to either cut in on the batter, or surprise him with a sudden change in speed in a fastball count. Here we find 57 such pitches, and some matching results as well. 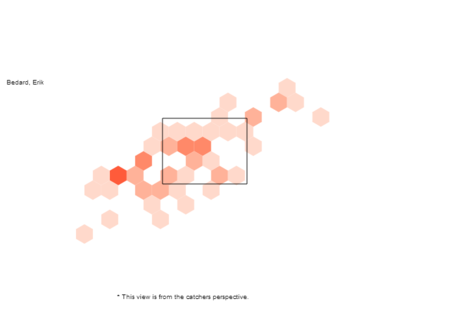 The distribution of results for changes vLHB shows a similar proclivity for whiffs, hits, and balls in play, but the balls taken are 40% of the 56 attempts. That's not ideal (since a lot of those are being taken for balls), but the change is still working out.

From a statistical standpoint, all of Bedard's pitches sub-80 mph are crucial to his game. His fastball-heavy make up as a pitcher has lead him to a rising flyball rate, but his change and curve combine for ~60% groundballs per ball in play. By comparison, his four-seam and cutter are each ~23%, but also ~28% whiffs per swing, important for a pitcher with a rising Z-swing rate.

All things considered, Bedard's change up use is both unique and thought provoking, even if his use of it is fairly standard. It balances out his arsenal, no matter how annoyingly slow everything involving a Bedard start can be.

1. I expected Bedard to up the use of his change upon joining the Rays, but he's done so with a remarkably traditional approach in the most unconventional way possible, by putting his focus on a sub-75 pitch, and cutting what was one of his best.

2. Interestingly, the Rays have essentially abandoned Bedard's slider thus far, which was his fourth most used pitch last season, ahead of the change, dating back to its change in velocity. At the time, the results were positive, with a sub-.200 BAA, and 13 K's induced with 31% whiff/swing. In the second half of the season he threw 152 sliders, but thus far has thrown only seven.

Part of the reason it's been abandoned could be batted ball tendencies. The slider sneaks in at 75 MPH, the same as the change and slower than the curve, but has a 46% flyball rate per ball in play. It was the likely culprit of his rising flyball rate from last season.

3. It's worth mentioning that two- and four- seam grips are not everything, as changes are also highly dependent on arm action. Bedard's looping throw does much to mask his pitches, but makes his control on the pitch all the more difficult -- and dare I say, exhausting. It's no wonder he takes so damn long between pitches.

Many thanks to Toby David for his assistance while writing this article.