Yesterday -- last night -- David Price was nails. And more than that, Jose Molina -- though still kinda a turd with the bat -- and Ryan Hanigan made his job way easier. Of his 12 strikeouts, 8 were consummated on a called strike. Erik alluded to this in the recap. Those called strikeouts plot thusly: 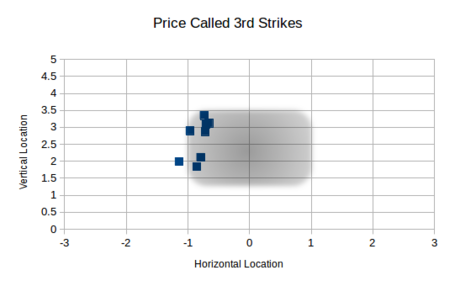 Corner strikes are tough to get, especially when it's a pitcher's count (like 0-2 and 1-2). These strikeouts, except for the final Cano strikeout (which was a full-count K) were on 0-2 and 1-2 counts, when the strikezone is at its smallest.

A normal catcher (and a normal pitcher) don't get those kinds of calls. Hanigan and Molina and Price made that 9th-inning comeback possible. Hopefully Jake Odorizzi can channel some of that success this afternoon. It would be nice, if not downright miraculous, to win two consecutive games.