After a few clunkers, Rays hurler Jake Odorizzi has been excellent in his last two outings. What has the right-hander been doing differently?

The first six starts of the season were tough sledding for Tampa Bay Rays pitcher Jake Odorizzi. Sure he had a solid first outing against the Texas Rangers, but overall he owned a 6.83 ERA with strikeout and walk rates of 20.2 percent and 10.9 percent, respectively. Four of those starts resulted in a single game xFIP of at least 4.68, and he averaged fewer than five innings.

However, Odorizzi's last two starts have been exceptional. In 11 innings, he's struck out 18 of the 43 hitters he's faced while surrendering six hits and four walks without allowing a run. While a .358 BABIP is keeping his ERA up at 4.89, his FIP and xFIP are at a much more respectable 3.55 and 3.71. Among Rays starting pitcher not named David Price, Odorizzi has the lowest xFIP, a shade ahead of Chris Archer. 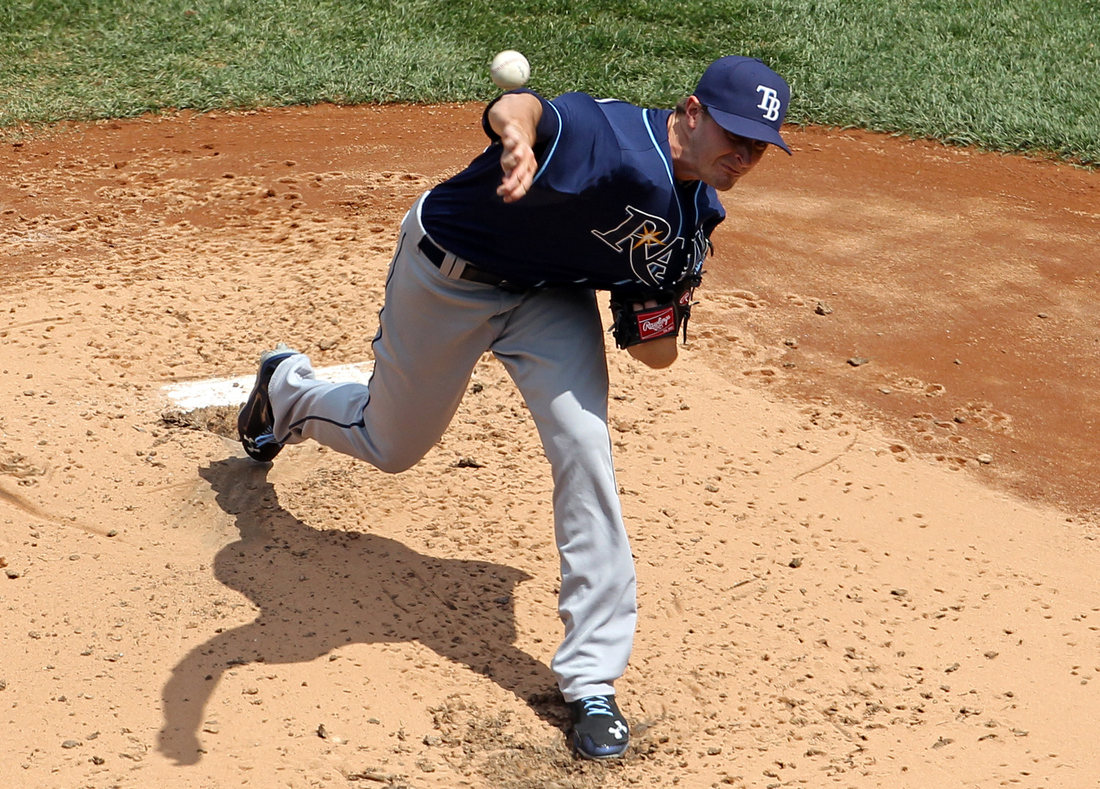 In his last two starts, Odorizzi has reintroduced his curveball. After throwing it a total of 23 times in his first six starts, he's thrown it 32 times the last two times out. The results haven't been earth-shattering, half the time he's thrown it the pitch has been taken for a ball, and it's rendered only two whiffs. But, Odorizzi hasn't been hurt by the pitch, and he's been able to sneak in some strikes. Furthermore, it keeps hitters off his fastball and gives them a different look than the fastball, slider and split-change mix.

Speaking of Odorizzi's fastball, it's been getting by hitters much more frequently in the last two outings. He's garnered a total of 19 whiffs with his four seamer in those starts, compared to 20 in the previous six. Overall Odorizzi's possesses a 9.7 percent swinging strike rate and a 25.6 percent strikeout rate. His contact rate is down to 77.8 percent, a big improvement on his first 30 odd major league innings where his 85.8 percent contact rate was on par with pitchers such as Blake Beavan and Lucas Harrell. It's unlikely that he's giving up on the split-change, but a few more curveballs and a better fastball might lend his repertoire a little more unpredictability.

Odorizzi isn't a David Price type pitcher. Don't expect him to go through the order three or four times or pitch deep into games on a regular basis. His numbers have diminished significantly each time the lineup turns over. Still, in shorter stints he might be a very good pitcher. Given the litany of injuries the Rays have suffered through, they'll take what they can get. A good Odorizzi in five and possibly six innings installments will work just fine.