Jake Odorizzi fails to get out of the fifth inning. Yankees pound Lueke & Bell en route to 9-3 victory.

Share All sharing options for: Rays Suffer 9-3 Loss To Yankees As Odorizzi Falls Short Once Again

The game went exactly as we may have guessed based on what we knew of each pitcher going in. Jake Odorizzi was solid the first time through the order retiring all nine hitters including three strikeouts while Masahiro Tanaka was not as good early as late giving up three runs in the first four innings he worked.

Odorizzi fell apart the second time through and was unable to make it out of the fourth fifth inning. His final line was 4+ innings of work three runs (all earned) on five hits striking out four and walking two. He departed with two runners on base and nobody out and had his line score was saved by the effective work of Cesar Ramos who held the Yankees off the board to end the fifth inning.

With Odorizzi not giving the Rays innings the taxed bullpen would be saved by turning to Josh Lueke who provided two ineffective innings surrendering the lead on a single run in the sixth inning and a pair of runs in the seventh.

Meanwhile Masahiro Tanaka settled in and delivered seven strong innings allowing three runs (all earned) on eight hits striking out five and walking none. He was followed to the mound by Dellin Betances who worked a scoreless eighth inning and Preston Claibrone worked a scoreless ninth.

Both Jake Odorizzi and the Rays needed a quality start on Saturday afternoon. For Odorizzi the prospect of not capitalizing on the opportunity to secure a spot in the Rays rotation was staring him down while the Rays bullpen has been taxed an overworked due to the inefficiency of the starting staff.

Masahiro Tanaka had been very successful entering the game making five starts and owning a perfect 3-0 record with a 2.27 ERA. In his 35.2 innings of work he had only allowed 27 hits and struck out 46 while walking just five. He had won his last 31 professional decisions (28 in Japan and 3 with Yankees).

If there is any blemish on his record it is the five home runs he has allowed and the opposition gets a quick jump on him posting a slash line of .286/.333/.476 the first time through the order.

Desmond Jennings took advantage of both of Tanaka's blemishes hitting a solo home run that could have been a two run homer (See Doug Eddings missed ball four call on Ben Zobrist below) in the top of the first inning. 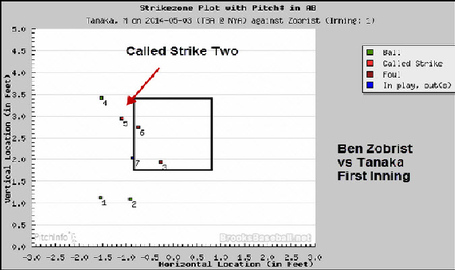 The Rays increased their lead to 2-0 in the bottom of the second on a 2-out single off the bat of Ryan Hanigan that scored James Loney from third. Prior to Hanigan's single Tanaka had held the opposition to an .074 (2 for 27) average with runners in scoring position.

The Rays got their final run as Wil Myers led off the fourth inning with an opposite field home run that extended their lead to 3-0.

While the Rays were building their 3-0 lead Jake Odorizzi was continuing his dominance of a lineup the first time through by retiring the first nine hitters including three strike outs on just 48 pitches.

The fourth inning would mark the second time through the New York lineup for Odorizzi and a turning point from which the rest of the afternoon belonged to the Yankees.

Jacoby Ellsbury led off the bottom of the fourth with a single and after Brett Gardner hit into a fielders choice erasing Ellsbury at second base Mark Teixeira delivered a two run homer to cut the Rays lead to 3-2.  Brian McCann followed with an opposite field double but Alfonso Soriano sent a shallow foul ball to right that Wil Myers made a nice leaping grab of for the second out. After a Kelly Johnson walk Odorizzi struck out Brian Roberts to end the long 29-pitch inning.

The Yankees continued their assault on Odorizzi the second time through the lineup as Ichiro Suzuki led off the fifth inning with a double, Yangervis Solarte drew a walk, and Jacoby Ellsbury laced a ground rule double to tie the game at 3-3.

With nobody out in the inning and runners at second and third his afternoon was over and the Rays turned to Cesar Ramos to come in and try to keep things from getting out of hand in the Bronx.

Ramos did all that could have been asked for striking out Brett Gardner, intentionally walking Mark Teixiera, striking out Brian McCann, and getting Alfonso Soriano to ground out to short to end the inning with the score tied 3-3.

Joe Maddon turned to Josh Lueke to enter the game in the bottom half of the sixth and selfishly hoped that Lueke could somehow keep the Yankees off the scoreboard and get two or more innings out of him. It took just one batter for the first part of the plan to be ruined as Kelly Johnson led off the bottom of the sixth inning with a solo home run to put the Yankees up 4-3.

After his two innings of work Heath Bell came in and was not effective. Brian Roberts singled and came around to score on a double by Ichiro Suzuki. Suzuki advanced to third on a Yangervis Solarte ground out. With one out Jacoby Ellsbury drew a walk and stole second base to get into scoring position for Brett Gardner who singled to score both Suzuki and Ellsbury to put the Yankees on top 9-3.